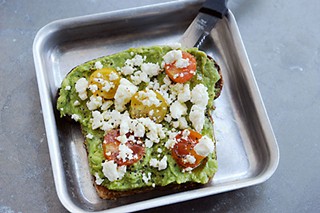 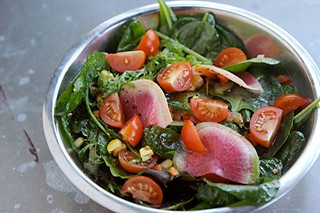 After a couple years of pinching tweezers and filling nitrogen tanks, Austin dining is once again looking backward. It only makes sense. In such a volatile year for hospitality (not to mention the broader world), what we know seems infinitely more appealing than what lurks on the horizon. And the city as a whole has always been prone to nostalgia anyway. With restaurants closing at a rapid pace, why not stick with what works? 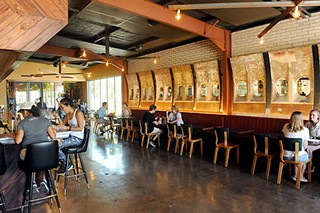 Although it was first announced during the height of the most recent restaurant boom, Irene's – the latest addition to the ELM Restaurant Group – feels inevitable in 2016. As a concept, it's a cocktail combining two-thirds Easy Tiger, one-third 24 Diner, and maybe just a splash of the West Fifth bars it neighbors. And without being too on the nose or relying on kitsch, it easily settles in Austin's current Seventies zeitgeist (see the green goddess dressing at Boiler Nine, the fancified fern bar drinks at Red Headed Stepchild, the entirety of Kitty Cohen's). The interior decor, like all the ELM restaurants by Veronica Koltuniak of VeroKolt, flirts with the decade's tackiness in small doses (some oversized glass grapes, a giant speaker behind the bar, curtains pieced together from Italian velour tapestries), never letting the more lurid elements overwhelm graphic elements like the massive paneled soffit over the bar or the wood beam fixtures crossing the width of the dining room. The wraparound patio area is more minimal, letting Shoal Creek pecans and landscaping from Eden Garden Design do most of the heavy lifting, but it still has a vintage feel in the seating, the much-Instagrammed neon sign, and the illustrated billboard by Xavier Schipani (he did the Sunday circular renderings on the menu as well). 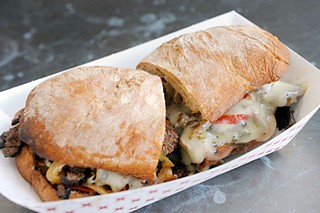 Beverage director Craig Collins' drinks (all $7) reinforce the retro, not only in their rejection of precious contemporary mixology, but also in their decidedly noncontemporary heavy pours and in the names that evoke the musical giants of the "Me" Decade (yes, the Kinks released "Waterloo Sunset" in the Sixties, and "Goodnight Irene" was recorded in the Thirties, but you'll get the drift). The former is a margarita in all but name, and the latter is made to the specifications of the restaurant's namesake muse, the grandmother of ELM partner Chad Gluckson, with two parts vodka, a splash of lime, and cranberry "for color." Deacon Blues gives the White Russian a redux with coconut milk, and the Lemmy is an unpretentious whiskey sour. Use caution with the punches ($7 for a mug, $28 for a jug). Neither a taste of the Trinidad rum punch (adding pineapple to the traditional one sour, two sweet, three strong, four weak recipe) nor the autumnal whiskey punch gave us any clue to the demons within. The servers give warning of the potency of the drinks, but punch indeed. 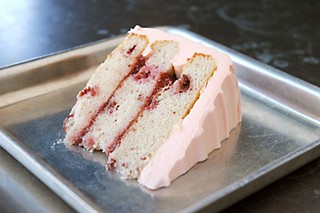 The snacks portion of the menu mostly follows the Easy Tiger playbook of riffing on foods your mom might have packed for a summer road trip if said mom also always packed a case of Lone Star. There's a platonic ideal of movie-theatre popcorn, drizzled in cultured butter ($2); a solid harvest club mix ($3) with some extra electricity from dill; a "picnic" plate ($12) with deviled ham, summer sausage, newly voguish bread and butter pickles, and a chow chow that bears little resemblance to the stuff you find in jars; plus a cheese plate ($12) focused on accessible American Cheddar paired with Confituras' miraculous nectarine and white pepper jam. Irene's pigs in a blanket ($6) gussy up the crescent roll/Lit'l Smokies version you make at home with a spicy house Andouille. Perhaps my taste buds are too finely attuned to the overly salted spinach and artichoke dips of my youth, but Irene's version ($8) seemed too gingerly in its attempt to de-junk junk food. The pimento cheese ($6) had more stamina. The slightly sweet piquillo peppers would not be my first choice, but they did make sense with the cream cheese base, ultimately winning me over. Both dips are served with saltines, a nod to tradition if not taste. Both do, however, combine in executive pastry chef Mary Catherine Curren's spare dessert menu. For photo-ops, there's a Dairy Queen-esque vanilla soft serve ($2). It should come as no surprise that we got ours with rainbow sprinkles ($1 extra). The real stars, however, are the trio of plated options ($7). Neither the strawberry cake, the (slightly deconstructed) banana pudding, nor the grasshopper bar make an attempt to be virtuous, which is the opposite of what dessert should be. But with all the emphasis on vice (Irene's also sells cigarettes should you be so inclined), it's somewhat peculiar that sandwiches anchor the menu. Executive chef Andrew Curren's crowd-pleasing steak and whiskey combo (just that, a one-pound NY strip served with sautéed mushrooms and onions and a shot of Old Grand-Dad – $29) and weekday blue-plate specials (all $15) do give you some option other than sandwiches and snacks for dinner. I meant to try as many as possible, but somehow landed twice on Tuesday for King Ranch during my review visits. It's everything you want from the Texas classic, if less salty than the cream of mushroom soup versions most of us are used to. No matter, there are shakers at the table for saltaholics (of which I am one). Irene's takes its lack of pretentiousness seriously. On a non-review visit, I did try the pot pie (served with a beautiful local salad). I didn't take any notes on the filling, but some things attach to your memory without any prompting, and the extraordinarily buttery crust is as memorable as any I've ever had. As good as the specials were, a few more substantial choices for dinner would be welcome.

That's not to disparage the sandwiches, which, to be fair, can be supplemented with substantial sides like dirty shells and cheese ($9 – beefed up with Andouille and peppers) and a bright potato salad ($4) for a fuller dinner. Each served on Easy Tiger bread, they are all Cole Porter standards occasionally jazzed up with a new arrangement. The steak ($12) splits the difference between French dips, Philly cheesesteaks, and Italian beef sandwiches, 86'ing the au jus. The veggie ($9) politely piles on cucumber, watercress, and a smear of scallion cream cheese, allowing for a few biting comments (a few shakes of Cholula) in its garden-party gentility. Mayonnaise-based tuna salad ($9, we made it a melt for $1 extra) doesn't stray too far from the classic formula, but prominent lemon makes it livelier than most, and the celery gives it a nice crunch. Texture plays a big part in the grilled cheese as well ($9), with bacon and Granny Smith apples added to a Havarti and white Cheddar mix. On the open-faced side (I know, we all call them toasts these days), the bacon with a fried egg and Cheddar, the creamy avocado with feta, and the mascarpone with peaches and basil are all flavorful and economical (they are all $6) ways to start a morning.

With the sale and closure of Arro and some recent changes at Italic toward accessibility, Irene's could certainly be seen as a step back. Certainly Andrew Curren's culinary skills don't begin and end with American comfort food. But perhaps this is a time for restaurateurs to be conservative, to focus on what customers want instead of trying to rocket their preferences forward. If there is a sense of loss in that for the overall local restaurant industry, I find it hard to pin that on the ELM Group. No one cares about more of the same when that brings repeat pleasures. 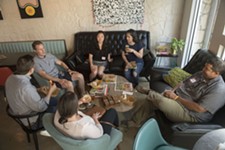 Top 10 Book Group Meeting Spots
Near-ideal settings for a successful book group meeting, with food and drinks, decent acoustics, and seating that allows for spirited discussion without having to shout