Korean bar and restaurant captures the spirit of Austin

I've grumbled about the proliferation of New American restaurants in these pages, but in truth, I'm thankful when they pop up on the docket. Rating those restaurants is easy. There are several other places working in that same general arena, and weighing their various virtues and sins is a matter of weights and scale. Those sorts of restaurants know from the beginning that they are going to be reviewed. In many ways, they exist for critics, or at least the dining demographic that thinks of itself in those terms.

But it's much more difficult to review a restaurant that fundamentally is not for me. College RoadHouse has been around for a while, but it recently came under my radar from a friend and colleague who may be the only geologist in town that is actually equipped to find hidden gems. The concept – part karaoke room, part bar, part restaurant – may seem unique in Austin, but it basically fuses the hof (a bar that serves beer and soju with finger food, often fried chicken) and the noraebang (literally translating to "song room"), both of which are common in Korea. There are a few overtures toward a Western audience, like a selection of American craft beers and finger foods like fried mozzarella sticks or jalapeño poppers, but mostly it serves an immigrant clientele. A loop of K-Pop videos plays on a big screen (handily reflected on two large mirrors), there are a few dishes like silk worm pupa ($6) that will be unfamiliar to most Americans, and plywood dividers are scrawled with aeni-style graffiti. 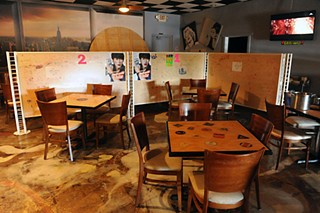 If no one in your party speaks Korean, be prepared for some small difficulty in communication. Our server was exceedingly friendly, but there was a little awkwardness when we tried to order mixed drinks. Explaining how to make a rum and Diet Coke proved to be futile, as did the attempt to order the listed mixed drinks, but we were satisfied with the soju ($12), the straight-out-of-7-Eleven alcohol slushy ($10), and various beers. Part of that comedy of errors surely was attributed to the greenness of the server, who was harried and didn't seem to know where the harder alcohols were kept, but his charm made up for any service stumbles.

And the food was just the thing to eat while drinking. College RoadHouse is known for KFC (Korean fried chicken), a whole bird fried and tossed with a sweet-spicy sauce. An earlier rush prevented us from getting the full chopped bird when we tried to order, but we were able to get the fried wings (10 for $12). We thankfully opted to get the "x-tra hot & sweet" chile sauce on the side (most of us found it to be a bit too sweet), but the chicken itself was juicy and well-seasoned, and a last-minute order of buffalo sauce proved to be an amicable dipper. Expertly fried foods make up the bulk of the menu, ranging from plump gizzards ($10) to kimmari ($8), dolma-sized parcels of seaweed wrapped around clear noodles. The latter was particularly interesting with a briny vegetal flavor peeking through the light batter. The only misstep was the fried pork dumplings ($7), which seemed like they spent a little time in the deep fryer as well. They were just a little too crunchy and could have benefited from a sauce, but the filling almost made up for that. The pork katsu ($12), served with a cooling potato salad and a slaw, was much better. The drizzled sauce kept the sourness from overwhelming the cutlets, as did the sticky rice.

If you are veering away from fried foods, the kimchi is not to be missed. It's showcased in stir fry with pork and tofu ($14), but it is just as good with fried rice ($9) and with fries ($10) piled high with spicy bulgogi. Those give Chi'Lantro's cult version a run for their money.

But in some ways, none of that matters. The food doesn't merit many complaints, but there are better Korean restaurants in Austin. There are places with better service and places that serve better drinks. But College RoadHouse does what its seemingly incongruent name implies – which is provide space for animated conversation and laughter. Austin may still be seeing a proliferation of critic-friendly New American restaurants, but College RoadHouse fits more comfortably with that vaguely defined "weird" that still remains in our city – proving there are many ways to be authentically Austin.