Local parish comes together around baking 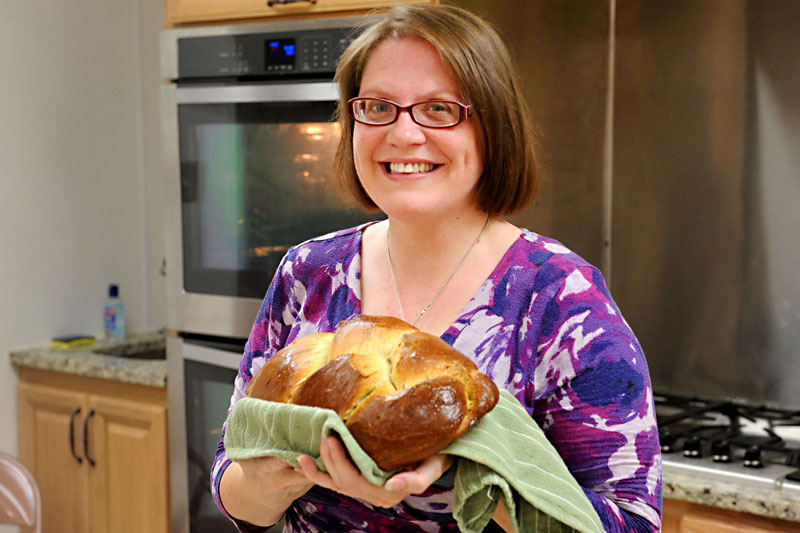 Memorial United Methodist Church is an unassuming house of worship on Berkman Drive in Northeast Austin. The grounds are immaculately groomed, and an LED sign alerts drivers to watch out for children and informs the neighborhood that Bread Church meets on the third Thursday of each month (this month meets July 28).

The image accompanying the notice is of a slice of bread composed of four different types ranging from a deep, dark rye to a tan multigrain to a Wonder Bread white. While that graphic isn't necessarily a metaphor for Bread Church, it could be interpreted as one of its effects: that of unity despite differences.

Pastor Cynthia Kepler-Karrer greets me with a broad smile and a plastic container teeming with tiny salted caramel cupcakes, each one lovingly piped with an artful swirl of frosting. As we decamp to the parlor, she explains that they are left over from an event the previous night.

"We used to get cakes, but we'd always have so much left over, and no one wants half a sheet cake. So I started baking mini cupcakes because if there are leftovers, it's really easy to share them or take them down to the fire station."

Kepler-Karrer's ministry is, if not defined by food, very much shaped by it. The motto for Memorial UMC is, after all, "Feeding Northeast Austin, body, mind, and spirit, in the name of Jesus," and bread plays a starring role.

For the congregation, which is small but thriving, bread isn't just a thoughtful, nourishing token from their pastor: It's a call to action. For a sermon over Jesus' feeding of the multitude, a miracle in which he fed a throng of 5,000 people with five loaves of bread and two fish, Kepler-Karrer made 200 mini loaves of honey challah and challenged the congregation to take home two loaves: one to keep and one to give away, and bring back their stories of what happened when they gave their loaves away.

"Some people gave them to people flying their signs on the street corners, others gave them to random people waiting at the bus stop," laughs the pastor. "That had mixed results. I was walking my dog later that night and found a couple of bags with the bread still in it, which I understand."

But other people, including Kepler-Karrer herself, used those loaves to meet their neighbors for the first time, a crucial first step toward engendering a strong community in Windsor Park, an old, continuously gentrifying, yet still diverse neighborhood.

This focus on strengthening the community around the church and beyond seeded the idea for Bread Church, which has its roots in Liverpool with a Methodist congregation called Somewhere Else, which gathers a few times a week to bake bread together and distribute it to the homeless and hungry.

Bread Church is also informed by Peter Reinhart's book Bread Upon the Waters. In it, the award-winning baker and author of Crust & Crumb reflects on the process of "divinization," the process by which one unites with God, woven through a narrative of making bread. Reinhart argues that true courteousness is the path to harmony, an acknowledgment of God within one another. "Two simple words, thank you, unleash a wave of communion-like energy that connects two passing souls for an instant in a deep and profound way," he writes. "Basic civility is like the bond that is formed when we share a meal together. It is a priestly act."

Kepler-Karrer says the book uses the process of making bread as a metaphor for life. Your life experiences are the ingredients for what kind of life you can shape for yourself moving forward. How can what you've experienced up to this moment in life inform what you do from here on out?

Bread Church launched at Memorial UMC in January of this year. Each month, a handful of participants gather in the church gym to learn a recipe – the inaugural meeting centered on Portuguese sweet bread, a fresh alternative to King's Hawaiian rolls – and during the rising time, the participants gather to discuss their spiritual journeys and make connections between the making of bread and life in community and their spiritual walk.

"Sometimes it feels like you've been punched down by life, either by a job loss, by an illness or death in the family," says Kepler-Karrer. "The thing about degassing is that you can't get all of the gas out, but it's what the bread does afterward. Does it deflate and never come back or does it rise back up and keep on going?

"Pulling bread out of the oven always feels to me a bit like resurrection," she continues. "You come out of the heat, and it's not as though the yeast is dead. It's been transformed into something that has great value and can feed others and offer itself to the world. You could look at bread as dead yeast or you could see it as life and hope. How do we form and shape ourselves to be life and hope?"

Other food-based ministries in Austin focus on physically feeding the hungry via distributing food and meals to the indigent and homeless. At First Unitarian Universalist Church, volunteers gather every Monday night to assemble 30 sack lunches to be delivered to the Austin Resource Center for the Homeless and distributed to the working homeless residents of the shelter. Numerous churches around town, including Trinity United Methodist and University Presbyterian, operate food pantries that attract dozens of people a few mornings a week.

University United Methodist Church hosts Open Door Brunch every Saturday morning, providing more than 200 hot meals to the homeless. Mobile Loaves and Fishes, founded in 1998 by five members of St. John Neumann Catholic Church, delivers meals to the hungry across Austin, and has branched out to San Antonio, Minneapolis, Providence, and more.

While those programs help fill empty bellies, Bread Church helps feed the individual spirit, like sugar feeds yeast. But it's a ministry with the potential to change the world – or at least our city. When people – even within a secular context – reflect on who they are and how they navigate life through the process of making bread, they can spread those effects throughout the community. Much like turning five loaves of bread into enough to feed a multitude.

A version of this article appeared in print on July 22, 2016 with the headline: Rise Above