Every dog has its day at north Austin hot spot 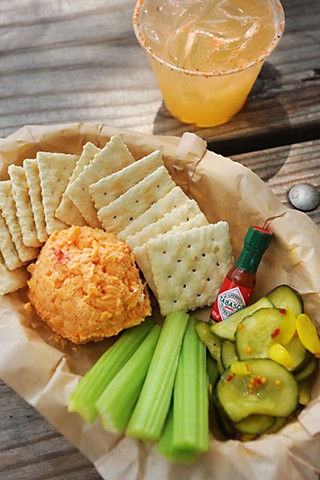 Maybe I should have borrowed a dog. The 40-some-odd pooches happily bounding about Yard Bar seemed to instinctively know the drill, but my boyfriend and I were slightly bewildered by the series of checkpoints and obstacles blocking the way to our first cocktail from former Michael Hsu Office of Architecture designer Kristen Heaney's dog park/bar/restaurant. The various fenced-off areas are no doubt there for the health of human and pooch, coupled with the requirements of a liquor license, and maybe some basic organizing principles, but we bumbled around for a good couple of minutes. Cat people may not be best suited to appreciate logic. 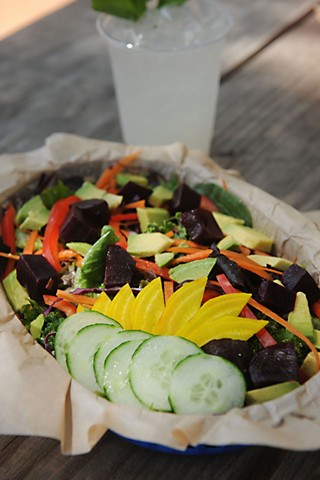 For less distractible people, the structure probably is not that difficult to figure out. There is a check-in window where dog owners can pay a small fee to allow their furry companions to enjoy the park off-leash (memberships and pass packages are also available). 21+ humans without a pup can order drinks from the inside bar without a cover. Across the fence, the food menu is available via table service on the patio, which welcomes patrons of all ages and leashed dogs (front of house manager Keith Sobieralski has an approach to service that caters to both). The decor is bare bones – all cyclone fencing and mulch, with only a little flourish from carnival lights and play structures – one of the reasons it took me so long to review it (Yard Bar has been open for almost a year; normally a review takes place within two to three months of opening). It seemed like a place best suited for four legs, not a place a non-pet owner would want to spend a Saturday evening. 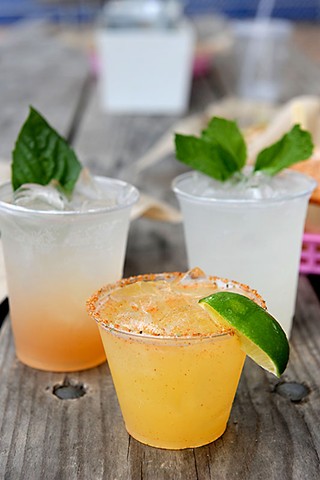 Certainly, bar manager Paul Chapin would have been excused if he just phoned it in. The novelty of being able to purchase booze on-site at a dog park checks enough Austin boxes as-is, without giving a second thought to quality. But this isn't the type of bar that displays a bottle of St. Germain on the wall to justify calling themselves "craft." The seasonal cocktails (all $8) are lighter and fruitier for the summer, but they tend to avoid obvious sugars. Those wanting easy sippers will find much to like in Living the Dreamsicle (vodka, orange, vanilla, cream soda) and Slippery Slope (strawberry, lime, lavender, sparkling wine), both almost as sweet as their respective ingredients would imply without resulting in toothaches. There's more nuance in drinks like the Frenchie (using a grape shrub and Argus Ginger Perry), Blue Lacy (with basil notes unexpectedly paired with rhubarb bitters), and Phil's Lemonade (where the rhubarb bitters meet cucumber and mint), all balanced with sourness. And, of course, there's the de rigueur take on the margarita – Catahoula Mama – a fresher version substituting orange juice for triple sec. Most of the same flavor combinations reappear as mocktails (all $4), a rare nod to the sizable population in Austin that (gasp!) does not drink. 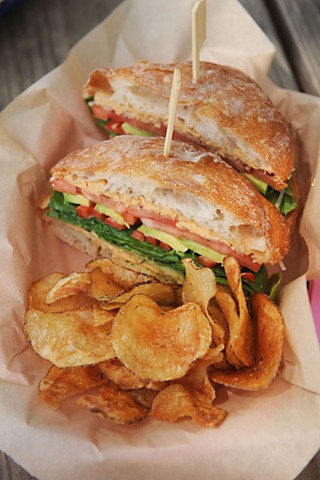 The mixed drinks are supplemented by beer, wine, and Kosmic Kombucha on tap. The beer selection is especially impressive, recently switching over to an all-Texas program. The menu has always been Texas focused, allowing for a few canned interlopers from Oskar Blues and Avery. But the complete changeover allows room for Yard Bar to offer beers other than the usual Pearl Snap or Zoe seen at most local bars. They have those too, but they are supplemented by less-featured choices from Hops & Grain and Austin Beerworks and rarer-still beers from 4th Tap, Martin House, and Strange Land. Currently, rotating taps are also devoted to Zilker, Real Ale, and Blue Owl – making the dog park a one-stop shop for people interested in trying the work of Austin's scattered urban breweries. The wine selection is less impressive, limited to two reds, a white, a rosé, and a sparkling, but, hey, this is a place that makes its own Cheez Whiz. You can go one night without a Pinot Grigio. 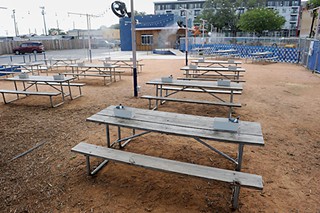 That sharp cheese sauce, simultaneously exactly and much better than the stuff you licked off your fingers when you were 12, appears all over kitchen manager John Workman's menu. It's a dip with greaseless medium-cut house chips ($6); it's a condiment on a classic American hot dog ($1 extra to the $6 base price gets you cheese and piled crispy onions); and it's damn near a benediction in the hush puppies ($9 for a dozen, $3 more with extras). The sweet corn pups hold up on their own, but when loaded with the house Cheez Whiz, black pepper-crusted bacon, sour cream, and scallions, they become a stoner tour de force, something you can imagine Kenny Crandell cooking in Don't Tell Mom the Babysitter's Dead. 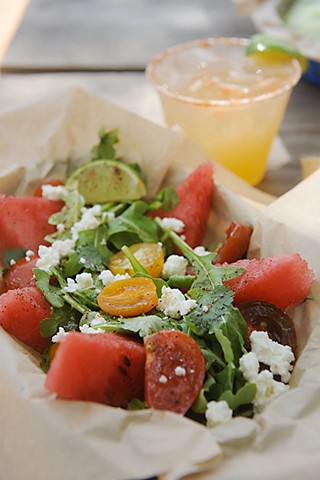 The rest of the offerings are similarly munchies-friendly, albeit with less spark. The picnic plate ($12) features three Antonelli's cheeses, including a beautiful Calabro ricotta, with the option to add good tasso, chorizo, or salami for $4 each. The accompanying bread and butter pickles – so hot right now – threatened to steal the show. The deviled eggs ($7) are listed as spicy, but only succeed in the vaguest connotation of that word. Still, the smoked paprika gives them a little character that would have no doubt been more prevalent if the halves were less shallowly filled. (That also affected the presentation; you could almost hear "womp womp" in the background.) The pimento cheese ($8) was also a disappointment. On the first visit, it was too densely packed, pulverizing the accompanying saltines. On the second visit, the round was more penetrable, but still lacked the tang the dish requires. Give us more of the Cheez Whiz.

The sandwiches include a respectable burger ($12; we tried the beef, but it's available in a veggie or chicken patty), a terrific fried chicken sandwich (the Yard Bird – $12) piled with a tangle of coleslaw and those bread and butter pickles, and a surprisingly sophisticated tea party chicken salad ($9), served with tarragon and a touch of citrus on French bread. We had chicken with the Hummingbird ($10 + $3 for the protein), but it didn't really need it. The dressings and spreads (garlic hummus and lemon pepper) give the vegetables enough heft to stand on their own.

The care with vegetables extended to the salads. The chicken Cobb ($11) is typical of its form – hearty with avocado, bleu cheese, and egg – but some standards don't need any riffing. The watermelon, arugula, and tomato salad ($9) could do without the sprinkle of chili salt on top. The feta gave it plenty of sodium; the extra flourish made the first few bites too biting. Order the Super Green salad ($8) instead. Tossed with the same lemon pepper dressing as the Hummingbird, it's a salad bar without all the work (and sneezy grossness), slung with carrots, beets, cucumbers, and peppers. If your summer isn't complete without spitting a few seeds, you can always order a watermelon slice ($1.50) where the house salt mix is much better applied. It can even take the place of dessert if your stomach is too full for a salted caramel drizzled brownie ($6).

If you do bring your rescue, there is a short menu of canine cuisine ranging from ice cream to sliders. I was tempted to order the PBP ice cream ($3) with Greek yogurt, pumpkin, bacon, and peanut butter for myself, but lost my gumption at the last minute. Perhaps I just needed the excuse to go back with man's best friend. I've been told that Hank, the Chronicle office's beloved tripaw, is also a formidable critic.