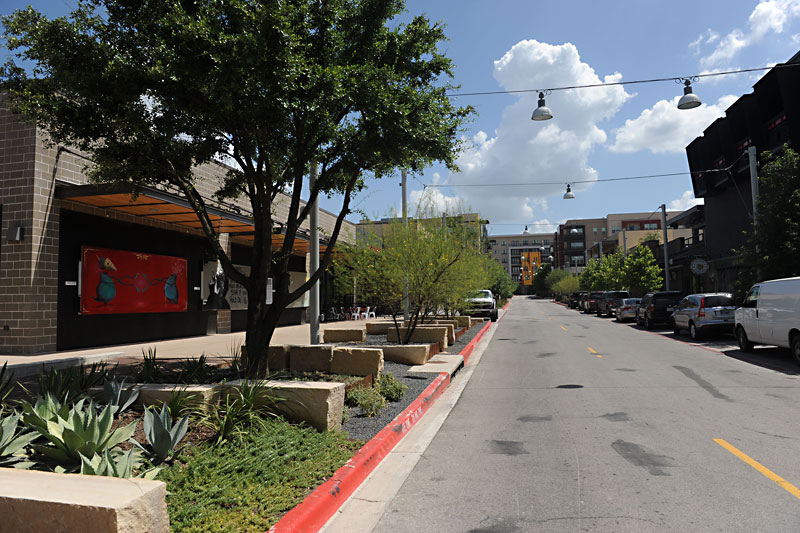 From the way some Central Austinites talk about it, North Austin might as well be Westeros. Oh, the storied hardships – the hunt (in the aisles of Whole Foods) for food, the long journey (downstairs) to the tavern, the constant threat that a white walker will cut you (off in line). OK, so maybe the North isn't for everyone, but maybe all the sophisticated urbanites should stop their yapping. Thanks to a boom in new restaurants and bars in the Domain Northside's new Rock Rose district, Northerners have much to crow about. Let the citizens of Essos enjoy their long commutes. Tonight we gather at King's Landing!

What to eat: The black pepper beef sandwich. Our first taste reminded us of the scene in Sister Act 2 when all the kids really start feeling the music.

What to drink: Real Ale's Gose. The sprightly sour may not be the best match for the delicate jasmine tea Mill-King soft-serve, but rebels always look sexier than conformists.

What to wear: A logo tee from nearby Weathered Coalition. Let 'em know you really support the neighborhood.

When to go: Now. You should have already been in line two days ago when it opened.

Who you'll meet: Chameleon Group restaurateur C.K. Chin, who was helping out in the kitchen during their recent preview.

What it is: A fancier version of the perennially packed Warehouse District sports bar, with two patios, 40 screens, and games in case you get tired of staring at Steph Curry's mouth guard. The Michael Hsu Office of Architecture interior is a contemporary take on the original's unassuming room without fixing what ain't broke.

What to eat: Clam scampi from Ralph Gilmore's Turf N' Surf kitchen (conveniently located inside). Foods with shells always look classy, which is important if you ever want to get her number.

What to drink: 4th Tap's Long Walk IPA. It's summer in Texas, y'all, and very few things are as refreshing as grapefruit.

What to wear: Your University of Texas polo shirt. Not the one you spilled a chili dog on. The other one.

When to go: After your neighbor threatens to call the cops if you don't stop yelling at the Spurs game.

Who you'll meet: A world Skee-Ball champion secretly masquerading as a staff accountant.

What it is: A West Sixth-style rooftop bar serving rum drinks, tropical-inspired foods, and sleek, all-white furniture. The mostly young crowd is best watched through a fish-eye lens so you can pretend you are in an early-Aughts P. Diddy video.

What to eat: The street fruit cocktail, with jicama, mango, cucumber, carrots, pineapple, and lime juice. As Cher Horowitz taught us, "anything you can do to draw attention to your mouth is good."

What to drink: Norman's Cay. Sure, there's a lot of rum in the cocktail, but the coconut water will keep you hydrated.

What to wear: A white halter jumpsuit paired with a comically large straw hat.

When to go: As soon as the sun goes down. All that white during daytime can look like a Jamiroquai video.

Who you'll meet: Your ex-boyfriend. On a date with somebody else.

What it is: Cocktails and small plates in a Hollywood Regency setting. It's not quite a dessert bar, but the place definitely has a sweet tooth in its drinks, its s'mores plate, and its English toffee French toast served at brunch.

What to eat: Chickpea-dusted calamari. It's a lighter take on the classic, so the only thing you'll be weighed down by is all that gossip.

What to wear: The Florence Welch-y Gucci maxi-dress you scored at the sample sale. But tell your friends you're just going casual.

When to go: 8pm on a Wednesday. Not a moment after.

Who you'll meet: Kelli, who just got out of a relationship, but she doesn't want to talk about it, OK?

What it is: An Irish pub that takes football more seriously than football. The menu has plenty of favorites from across the pond like Guinness-battered fish & chips and bangers & mash, but they also have a grilled tuna sandwich to make up for all that beer drinking.

What to eat: Breakfast in Purgatory, J&G's take on the full English, with two eggs, two slices of bacon, two sausage links, crispy potatoes, beer-braised peppers, toast, and absolutely none of those horribly treacly baked beans that Brits insist are edible.

What to drink: A shot of Jameson.

What to wear: A Manchester United jersey and a pair of Umbros. We are all here for the thighlights.

When to go: During one of the Copa América Centenario watch parties.

Who you'll meet: An Apple marketing executive who will unconvincingly try to sound like Bono for the evening. For a short while, after a few sips of Irish coffee, you won't care.

What it is: Hot meets hawt in Thai Changthong's first brick-and-mortar. Some of the trailer's greatest hits are here, paired with air-conditioning.

What to eat: The papaya salad. Pro tip: Eat from the top where it is less incendiary. Laugh at your friends when they desperately reach for water.

What to drink: The Chi cocktail. If you are going to have that much spice, you'll need to cool down with saké, mint, cucumber, and lime.

What to wear: Your cutest jorts.

When to go: Every day. You'll need to build up your tolerance.

Who you'll meet: Peelander Yellow, who did the artwork just as he did with the truck.

What it is: Not technically in Rock Rose, but just a hop, skip, and a jump around the corner. The atmosphere is sports bar, but the expansive menu just starts at wings.

What to eat: The Nashville Hot Chicken. When I dip you dip we dip.

What to drink: The Easy Kentucky, with Woodford Reserve bourbon and cayenne pepper. The bartender will make it less sweet if you ask nicely.

What to wear: Your work gear. Here's where you go to scream with the boys in the secretarial pool.

When to go: Any time there is an important game.

Who you'll meet: The HR director of a competing company. Does she know you're looking?

What it is: Small plates with an Italian focus served in an understated farmhouse-modern dining room. The menu spans everything from crudo and arancini to oysters and foie.

What to eat: Spaghetti carbonara. It's like the pasta version of Donna Karan's seven easy pieces.

What to drink: The house red. It's only $5 at happy hour, the least expensive way to get that purple-toothed look that is so in right now.

What to wear: A gingham button-up. Don't just eat on a tablecloth. Be the tablecloth.

When to go: Ahem. Happy hour. Hap-py ho-ur. How many times do we have to say $5 glasses of wine?

Who you'll meet: Karen, your work nemesis. After a couple of glasses of red, she'll admit to sleeping with your boss. Use this information to crush her.

What it is: The second location of the West Sixth favorite brings plenty of drinks, a Southern-inflected menu, and a rooftop for sweating them both out.

What to eat: Chicken 'n' waffle sliders, because why should you have to do all the work of composing a perfect bite?

What to drink: Water. You have been drinking all week, and, frankly, that liver needs a rest.

When to go: At sunset after a day where you just can't even.

Who you'll meet: Tabitha, who you have known since high school, but lately feel like is drifting away.

What it is: Colorado-based chain is part of the great salad invasion of 2016 (there are also paninis and wraps). For some reason, the Texas-only salads are named after a murderer (Bonnie Parker, girl loved her Craisins) and a Madonna biopic (Eva Perón).

What to eat: The Don Quixote with piri piri shrimp, if only because it's to call a salad "quixotic."

What to drink: A strawberry cooler, which is basically summer, juiced.

When to go: Lunch. Alone. Take a bunch of selfies of yourself laughing.

Who you'll meet: Your Pilates instructor.

What it is: A serious coffee shop that gives back to the farmers through Farmers to 40 and gives an option for Domainites (ians? ers?) who can't stand Starbucks.

What to eat: A cinnamon roll from Quack's.

What to drink: A cortado. Sip it while reading Italo Calvino and scratching your chin.

What to wear: Your best business casual. Are those Rob Kardashian socks?

When to go: In the morning before work.

Who you'll meet: Your workplace crush. Is he also wearing Rob Kardashian socks?