It's a tough job figuring what exactly Austin is these days. The eternal debate comparing "old Austin" and "new Austin" is probably a boondoggle now, if only because "new Austin" is still desperately searching for an identity beyond the current flash in development. Still, if we are to see shapes in the clouds, undoubtedly that thing is monied, upscale, fancy – something that sips matcha in a Google break room rather than throws back shots at a dive bar. It would have seemed that Gardner, Ben Edgerton and chef Andrew Wiseheart's first move after Contigo, would have fit in with the new. Its buzzy unveiling at the 2014 Austin Food + Wine Festival with a minimally printed white banner and a long table dotted with art-directed waxed vegetables was certainly not how things used to be done. The interior, with hardly a trace of barn wood, wasn't how restaurant spaces used to look. But for all the talk of the spirit being slowly drained from the city (some true, some far-fetched), Austinites still like to see themselves as friendly and casual. Rightfully lauded though the food was, Gardner never really excelled at being either. After barely over a year in business, it closed before this year's SXSW – miraculously reopening two weeks later as neighborhood concept Chicon. The simple tables and stark fixtures were sold off on Etsy, and replaced with Southwest drag. The Andrew Wyeth service staff were allowed to sunbathe. I wasn't prepared to like it. I was a frequent defender of Gardner's unwillingness to conform to Austin cliches. And while I have always been a fan of the relaxed decor at Contigo, my fear was that Chicon would look like a photocopied photocopy. But interior designer Ann Edgerton (who also was responsible for Gardner) does an admirable job of giving Chicon its own identity, reconceptualizing the space as a sort of hacienda to Contigo's rancho. There's no wayward kokopellis, but she does charmingly dip into some of the more recognizable aspects of Eighties desert design. Terra cotta sconces dot the wall, Mexican blankets are made into fringed banquette pillows, and willow twig chairs surround a round table. The familiarity of those tropes borders on cheesy in theory, but in practice they infuse the space with warmth – not an easy task with the austerity of the original buildout. Indeed, austerity seems to be the main thing shed in the transformation from Gardner to Chicon – and that carries over to the cuisine. Again, at first glance, the menu seems to follow the Contigo template. On the snack menu, here's a dip and there's a snack mix – add an El Pepino and a breeze and you wouldn't be able to tell the difference between the two restaurants. Except the dip here is a creamy smoked trout ($8) served with pickled shallots on rustic crackers, giving traces of the smørrebrød. Or it's a smear of whipped feta ($7), classically paired with dill and mint, but thrown (pleasingly) off-kilter with a tumble of Southern pickled green tomatoes. Or better yet, it's carrot hummus ($7) that's brightened with lemon and roasted tomato and served with everything Parker House rolls, anteing up Contigo's pastry game. If Chicon is a sibling, it's the older, more responsible one. Those snacks are served with a few local beers and a slim, but versatile wine selection with plenty of affordable bottles and glasses. The cocktails use some of the most creative ingredients in town. The New Delhi Mule ($9) adds cardamom and grapefruit to the canon combo of vodka and ginger beer. Fenugreek (obviously) has first billing in the Fenugreek to Me ($9), which sweetens mezcal with bourbon. Rhubarb does the same trick in the Spirited Dispute ($10), taming the smoke. And for those who like the El Pepino, there's the Concombre ($9) – adding jalapeño to the Austin classic. 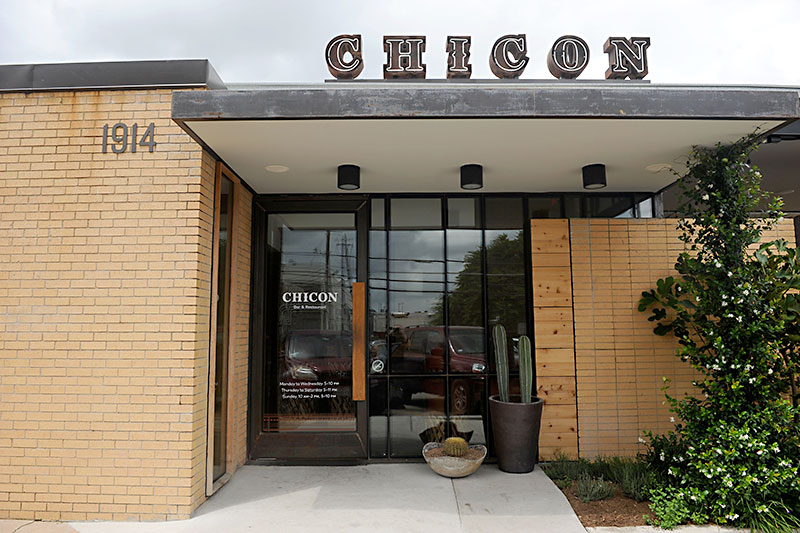 Back to the food, Chicon's assuredness carries over to the simplest thing like the salty twisted pretzels ($5); the pork rolls ($3.50), a holy union of a Hot Pocket, bagel, and a kolache; and the thick camp bread served with several of the dishes. Like roti, that flatbread is a suitable base for all manners of topping. Wrapped around the crunch of beer-battered fish ($6) with shaved cabbage and tobiko roe, it reinvents the fish taco. Wrapped around helium-light pea falafel ($11) and spread with curry-spiced carrot puree, it gives new vigor to the falafel wrap. Both of those dishes are prime examples of how Chicon revisits some of the haute touches of its former occupant in a slyly accessible way. 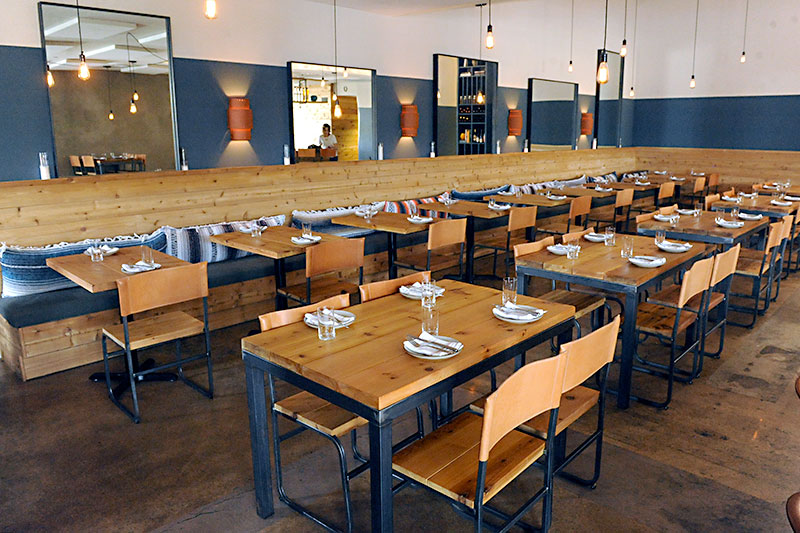 Certainly few foods are more traditional than grilled chicken ($34), one served with buttermilk ranch at that, but guajillo chile adds illusive heat. A flat iron steak ($21) with fingerlings on the side has the pleasing bitter of a burnt tomato vinaigrette. Even beets ($10), that most overused of vegetable small plates, sneak in sweet green garlic and grapefruit in a dish that could have been pulled from the Gardner menu, but seems less alienating at Chicon.

But none of the dishes are dumbed down. Chicon still has room for a yellow squash dish served with creamy sunflower seed risotto ($18) and Mediterranean-inflected charred octopus ($11) topped with caper berries and plump corona beans. And it also has room for a juicy burger ($13) that does away with anything conceptual altogether. Wiseheart's palate is as far-ranging as it has ever been, even if he is largely focusing on the hearty. 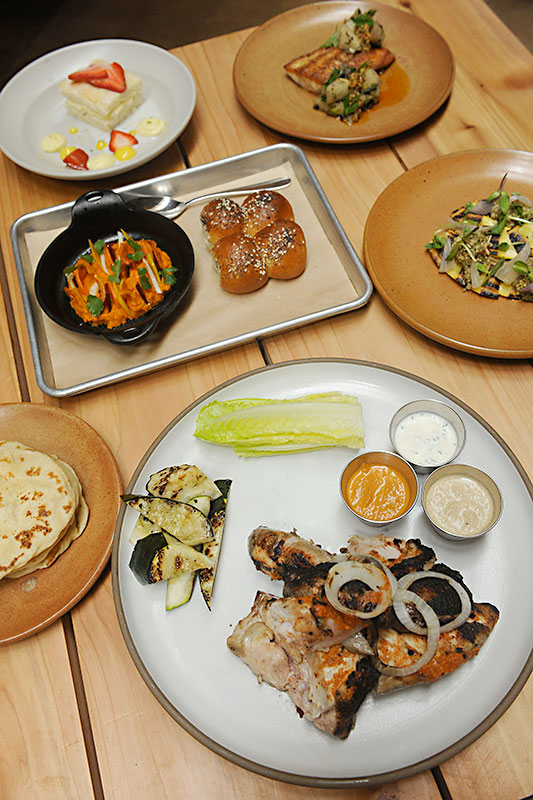 The dessert menu is comparatively spare and light, but hardly an afterthought. House ice cream ($4) like fenugreek lavender honey supplement a list that again errs toward the rich. The chocolate brownie ($6) is as rich as you would want it to be and the milk & cookie ($3) as comforting, but after all the heavier flavors, the tres leches-ish coconut cake ($6) topped with mildly sweetened basil cream is a wake-up.

But for all that I find pleasing about Chicon, it never rises to the heights of its predecessor. The ingredients are not as diverse, the techniques don't seem as inventive, nor the process as painstaking. But that's ultimately OK. Chicon does exactly what it advertises itself to do, they just do it with more care than most restaurants would begin to. And I admit it is an easier way to eat than the formality of Gardner. If I have to cry on a shoulder, I'm thankful it's this one.