Looking at Austin through new eyes

This probably isn't much of a surprise to regular readers of this column, but I've lately soured on the city I have called home for more than a decade. My baggage barely zips because of all the reasons – cost of living, boredom, my inability to rope in a man. I might take full advantage of the bustle of Austin's restaurant and bar scene, but I often still feel like something is passing me by.

But sometimes the best way to renew faith in your town is to see it through other people's eyes. I spent last week touring the Paso Robles American Viticultural Area (really 11 distinct areas), a breathtakingly beautiful part of California that is producing some of the nation's best (and most affordable) wines.

If I lived there, I would undoubtedly be smug. Even watching the sun set one night over the rolling fields of Eberle Winery made me question why I keep choosing the hustle of ATX (the port might have had something to do with that too). "Maybe I'll just miss my flight," I thought. "Maybe Starbucks is hiring."

It seemed shocking to me that almost all of the winemakers I met had a genuine appreciation for Austin. Molly Lonborg, the assistant winemaker at Halter Ranch Vineyard, who just got back from Austin, raved about our restaurants. Robert Hall's Don Brady (a Texas Tech graduate who helped establish our state's wine industry) chatted about the Salt Lick. ONX Wines' Ann Day-Wills was enthusiastic about introducing their wines into our market (their Indie rosé would be perfect for summer heat). Several winemakers expressed disappointment that the Austin Food + Wine Festival was canceled, ruining planned Austin trips.

What was I missing? How can our city possibly be that remarkable? The key to greener grass is the ability to see all the baubles of a city without really noticing the fishing line holding them aloft. Maybe Austin can get back some of its luster if I view it like a guest.

The cooperative spirit between wineries that impressed me in Paso Robles is definitely here, especially in our burgeoning craft beer industry. The underdog fortitude is here too – just look at what is happening in Driftwood near the Salt Lick. And the breathtaking views? They're all over Central Texas when you start looking.

It's so easy to get bogged down in the mire of our town, the uproar over TNCs, the nervousness over restaurant closures, the artificial fissures between old Austin and new. Whether one lives on the California coast or in Central Texas, anxiety is still the same. Slowing down to appreciate what's in front of you is still one of the best ways to cure it. 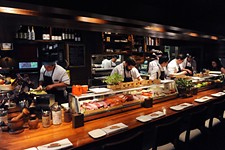 Dear Glutton
Where to mend a broken heart