Shoulders to the Wheel From starting out as a pop-up service four years ago, to opening a 150-square-foot space in the back of Farewell Books, Flat Track Coffee owners Sterling Roberts and Matthew Bolick have always been on the move. In fact, "anything with wheels" has become a slogan at Flat Track. One quick look at their Instagram – featuring photos of vintage pickups, dirt bikes, and the occasional Mercedes fire truck – is all we need to tell these dudes are obsessed with the road. Even their name comes from motorcycle racing. It's only fitting that they are now setting up a storefront inside Eastside custom bike shop Cycleast.

"The owner of Cycleast was using half of his building as a community space, but was wanting to do more with it," says Roberts. "He always wanted to offer his customers coffee, so when he heard our dilemma, he asked if we'd be interested in splitting his building. The fit seemed very natural, considering Flat Track has developed a large customer base in the cycling community, and cyclists love coffee." 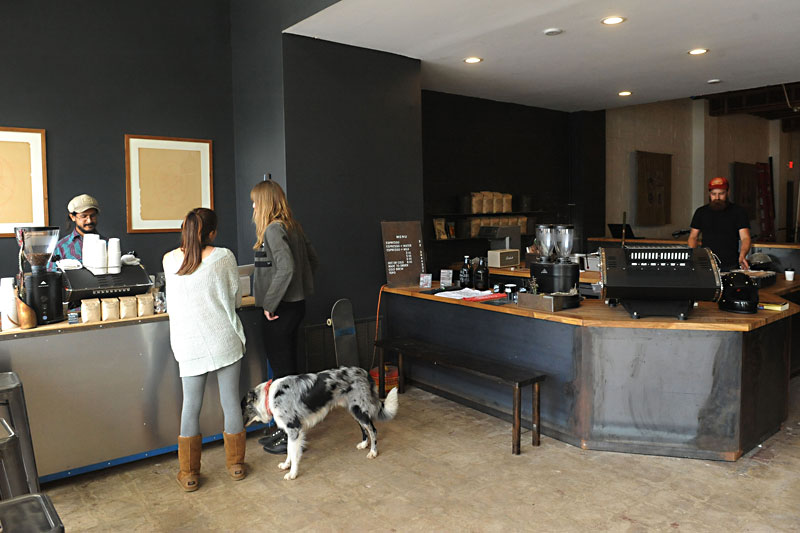 Unlike the first micro-brick-and-mortar, Flat Track's new space was fully funded by a successful 30-day Kickstarter campaign last year. "We had set our goal at $30,000, and it was down to the wire," says Roberts. "I think we finally broke our goal 48 hours before the end of the campaign."

Roberts and Bolick's intention was to keep the minimalist spirit of their former shop alive. The new place gave them more space. The previous six barstools morphed into seating for about 25-30 people with two full-length bars, one at the front with a window facing Cesar Chavez and one at the back overlooking the cafe. There's also a wraparound bar where customers are able to see Flat Track's roasting and day-to-day operations.

Flat Track's aesthetic mixes industrial elements and minimalism. Roberts has a welding background, and steel is an essential element of the design. Along with Flat Track partner and roaster Jeremy Brooks, he crafted all the shop's woodwork. To add warmth, Flat Track looked to designer Lilianne Steckel, whose work includes the luxe Caribbean interior of Fourth Street's Isla and the texture-filled redesign of the Thunderbird Coffee on Koenig, in addition to the first Flat Track space. "We received such great feedback from our customers and other designers that we really wanted her to do our next space. She dreams up the space, and we build it out," Roberts says.

The new shop is on track to becoming a community hub. The Kickstarter promised eventual classes, but until then, Flat Track spreads the gospel of good coffee through their beans – available through their site and a variety of other places, most notably Wright Bros. Brew & Brew (Bolick is also one of founders of the popular Eastside hang) – and some partnerships. "We love collaborating with other local businesses for special projects like Zilker's coffee milk stout," says Roberts. "Coffee has a lot of versatility, and we like working with people who have unique visions on how to make coffee reach a wider audience with other uses." If history is any indication, that idea just might have wheels.