Clarksville gets its (not) just desserts In the current vogue for all things craft, it's easy for bars to forget the reason they exist. Stocking the shelves with cult spirit brands might impress, but ultimately people go to bars to gossip and laugh, to make connections, to flirt, to console. And, really, Old Grand-Dad can do that as well as Pappy Van Winkle.

That's not to make argument against high standards, but it is in favor of more bars adopting the easy conviviality of Nightcap, the long-awaited Old West Austin dessert bar near Clarksville from hospitality vet Christin Rowan. Here the kitchen churns out precisely plated dishes that require a mini-monologue from the servers, but the cocktails have punny names like I Wish You Would Cucumber, and the soundtrack (at least on one late visit) is a bumping mix of Britney, Miley, and Beyoncé. The interior may have some sobriety, with its grays, plums, and brass from Dick Clark + Associates, but even that gets a poke in the ribs from their mascot (a plush shark) and a drink, the Straight Up D*ck. In short, Nightcap is fun. The food is the only thing that approaches seriousness. 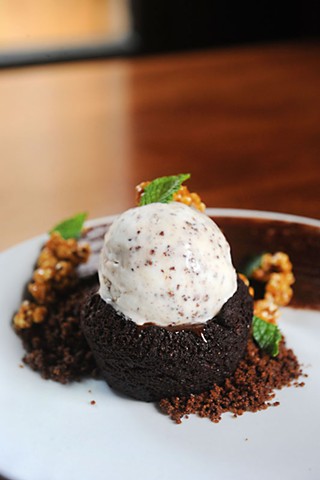 That's the work of Chef Drew Dunston, who cut his teeth at Paggi House before moving to Chicago to work at Ryan McCaskey's Acadia. That experience seems to have given his cuisine considerably more wanderlust than that of the often pedestrian Paggi. No pastry chef is named on the website, even though dessert is the purported focus.

The sweets menu trades on the nostalgia that has become an Austin trademark, accessibly reworking forms and flavors without dumbing anything down. The blue ribbon goes to Rocky Road ($11), a superlative vegan dish that avoids the common pratfall of substituting too much sugar for dairy. Coffee + Donut ($10) is a close second in the race. Using crispy ham in a dessert is almost commonplace now, but the cardamom cream used with the ricotta beignets prunes any boredom. The mason-jarred Dreamsicle ($11) was also perfectly agreeable. Crème fraîche is used to great effect to take out the treacle from vanilla ice cream, but the orange was barely innuendo, robbing the dish of its advertised flavor profile. Still, the only real disappointment on the sweets menu is the composed cheese plate ($13). The expectation here is blocks of three or so different varieties of cheese, but only one is included (the gastrique provided did match it perfectly).

On the savory side, I appreciate that Nightcap is trying to keep to the pastry theme, but a couple of the vegetable options flew too close to the sun. The cauliflower ($12) in particular was disjointed, a fairy crown of both pickled and roasted florets served with a pistachio crumble and white chocolate. Both of the preparations fought against the chocolate, dividing the flavors into mosaic squares. The roasted beets ($10), presented in neat cylinders, made a better play for cohesion – but the raspberry was a touch too tart.

I found no such faults in the meat dishes. Tender slices of grilled hanger steak ($29) were quickened by lightly pickled ramps and grounded by barley. The truffle jus was used subtly in the roasted chicken ($26), saving the already earthy trio of pommes dauphine, black garlic, and hen-of-the-woods mushrooms from burial. Atlantic salmon ($18), given a crisp sear, was similarly rooted with celery root (again cut into tubes) and mustard seed. Dunston uses the opposite approach on the pork belly ($17), contrasting the fat with pipes (ahem) of cucumber filled with lime froth and green apple. It's a dish that is refreshing in every connotation.

If you are just at Nightcap to drink, order the pretzel ($6) anyway. The very mild dill garlic butter served alongside doesn't detract from any of the sweeter libations, and it's a genial companion to the more booze-forward cocktails (a bargain at the happy hour price of $7). Several of the drinks have a savory element anyway, like the Paloma-esque Jalapeño Business; the Radish Me, Baby made with horseradish vodka; or the aforementioned I Wish You Would Cucumber, made with assertively herbal Uncle Val's gin. Rye You No Call Still shares much with the Old Fashioned, but strawberry gives it a springly sippability, as it does in the Don't Be Bitter, a take on the Negroni. All of the drinks share one thing in common: Nightcap isn't afraid to buck what's "right" for crowd-pleasers (the D*ck features Stoli vanilla for chrissakes). In the macho world of upscale barcraft, that's refreshing – but that seems to exactly be Nightcap's m.o.