How much is too much for Austin diners? 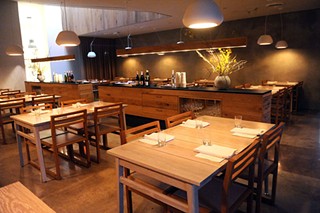 Ah, the fickle dining public! One minute we're all rushing out to sample the goods of the newest culinary luminary; fast-forward a year and we couldn't care less. Such seems to have been the ill fortune for a number of Austin's buzziest formal fine-dining emporia of late. The unceremonious shuttering of critics' darling laV on New Year's Day shocked staff and diners alike. Congress, Gardner, and Arro were also casualties of an industry that is so volatile these days even junk bond traders steer clear. The restaurants that remain on the field – Jeffrey's, Barley Swine, qui, Lenoir, and others – are continually experimenting with format, menus, service style, and promotional events to attract diners.

Yet here we are, destined to become, if the food industry's trend spotters are correct, America's next culinary hot spot. Why is it then that so many of our more influential fine-dining establishments are having trouble making ends meet? Are these restaurants simply casualties of public ennui, or is it, as this paper's Food Editor Brandon Watson suggested earlier this year, that Austin palates are still not ready to embrace true culinary innovation? Or could it be that Austinites, quite literally, are no longer putting their money where their mouths are?

"I've speculated about that a lot," says Andrew Wiseheart about the former Gard­ner, the creative, vegetable-forward restaurant he co-owned with Ben Edgerton, which closed in March. "Were there too many formal fine-dining restaurants? Was it location, price point, timing, food, aesthetic? It had to be some combination of those things."

One thing is sure, any market researcher will tell you that as Austin densifies, it is also becoming more neighborhood-based. For starters, traffic is a bitch. Most folks would pick waterboarding over trying to drive from Allandale to East Austin at rush hour. Although both neighborhoods are well within the urban core and separated by less than eight miles, driving there on any given weeknight can take close to an hour. Apart from cycling – and who wants to show up to a formal restaurant dripping with sweat? – there are no better transportation options. This effectively decreases the pool of patrons a restaurant can attract. In economic terms, in order to stay in business, restaurants must rely on the repeat business of neighborhood regulars. And to attract regulars, restaurants must set their price point at a level that an average individual or family can afford on more than just special occasions. So clearly cost is an issue, but probably not the only issue.

In the food industry, a combination of income, consumer tastes, and demographics drive demand. With respect to taste, I actually don't believe Austin diners are less foodie than in other big cities. Indeed the success of places like Odd Duck or Launderette suggest that Austin diners are not just interested in food innovation, but are willing to wait in long lines to get it. What makes these places different from, say, the former Congress or Gardner is that they come not just with a more accessible price tag, they also have a mix-and-match menu style, along with a more casual service style that appeals to a broad audience. Let's face it, who really wants to be tethered to a chair for a 10-course formal meal served by a gaggle of white-gloved waiters?

Approachability is the latest buzzword of the dining scene here; and it encapsulates everything from price to decor, and service. A report on Austin's food industry indicates that the local food scene is rapidly becoming an important element in the tourism sector. The strongest allure for outsiders, the report concludes, is the way that certain local restaurants reflect Austin's hip, indie style. Austin food is smart, creative, and stylish. However, it is not formal.

Gardner's Wiseheart believes that there will always be a place for formal fine dining, serving residents and tourists alike, but for the moment there seems to be a limit to the number this town can sustain. The former Gardner space has been repackaged as Chicon. With Chicon, Wiseheart and his partners lowered the price point, they opened up and brightened the space to give it a neighborhood feel – in short, made it more approachable. Although it is still too soon to say whether Chicon will be more successful than its predecessor, so far the change has been positive. It may simply be that formal fine dining is not Austin's brand. 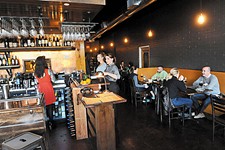