Heroes on the Half Shell

The oyster is Austin's world 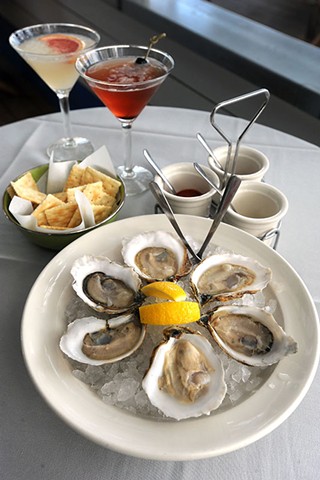 Raw oysters are the Prince Rogers Nelson of the seafood world: staples of the scene, but weird enough to only be consistently treasured by some; always funky, sexy, and good for the soul, but endlessly varied and complex. From their humble origins as a survival food some 10,000 years ago, oysters became working-class fare in the 19th century, and then a rare delicacy for the well-to-do or adventurous eaters. Bivalves are now enjoying a resurgence in popularity at happy hours across our landlocked city.

Austin is #blessed with a bounty of high-quality seafood peddling establishments, and all the go-tos feature raw oysters, with most offering a good deal at least one night a week: Clark's Oyster Bar and big brother Perla's, parkside and Alcomar, Quality Seafood and Mongers Fish Market, Foreign & Domestic, and Justine's Brasserie, Hillside Farmacy, and even Lucy's Fried Chicken. Jack Gilmore is opening Salt Traders Coastal Cooking this summer, and the list goes on and on. In far North Austin, a bright orange nautical-clad building hosts Deckhand Oyster Bar, a favorite spot of most anyone who's dined there. Owner Sompheng "Tarzan" Saybounkham, originally from Laos, is a shucking expert, having fished for shrimp and oysters in the Gulf since 1980. The menu is almost exclusively seafood, with a variety of oyster dishes, and a Thai element. The Tom Yum soup – or "Asian hangover cure" – is some of the best around, with mussels, delicate white fish, and broth flavored to perfection. "Our signature is Gulf Coast oysters. There are a lot of oysters around, but in my experience Gulf Coast oysters are the best," he says.

A gender-bending, traveling aphrodisiac loaded with calcium, iron, zinc, and protein, the not-so-humble oyster is currently rated a Monterey Bay Aquarium Seafood Watch "Best Choice" for sustainability. Oysters clean and clarify the water, require very little resources to survive, and their posthumously discarded shells can be returned to the water for a new generation of oyster youth. Maybe the best part, though, are those amino acids coursing through the oyster bodies just waiting to boost the mood of their food chain higher-ups. 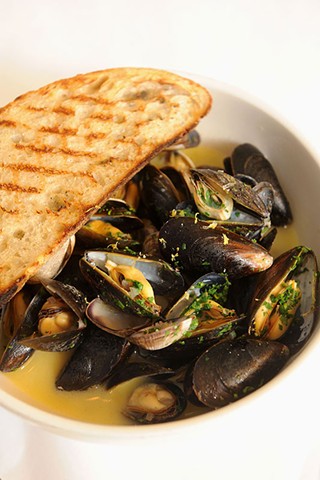 "I see a lot of people come in carrying a lot of stress from work, or family. They come sit down at the bar, right in front of the oyster shucker, have a beer, and have a half or whole dozen oysters, and they become a different person," says Saybounkham. "People eat the oysters, and they release the stress."

Origin stories are also incredibly important for the environmentally sensitive mollusks: They can absorb the negativity – pollution – from their habitat, which makes sourcing locally, seasonally, and responsibly essential. (In Vietnam, where regulations are nil, for example, oysters may be farmed in old tire piles submerged in polluted bay waters.) Upbringing also directly affects the oysters' flavor profile and size, which corresponds with price points and reputation. The terroir, or environmental factors of a habitat – mud, salinity, water temperatures and depth, etc. – differs from region to region, bay to bay. East Coast oysters tend toward a larger variety of flavors, many highly coveted and commanding high prices (think famed Blue Points), but often veer toward the mid to small size. Gulf oysters tend to be mild (and almost universally palatable) because of a shorter growing season, and they're significantly larger than most. "Everything is bigger in Texas, right?" jokes Saybounkham.

Oyster expert Rowan Jacobsen of renowned Oyster Guide praises the Gulf beauties: "Thank the famed Gulf oyster for keeping oysters from being an exclusive treat. Oysters grow like weeds down in the Gulf. They are still natural-set, still wild, more or less, and still affordable – more or less. The lower salinity levels of the Gulf have protected wild oysters from certain diseases in a way that hasn't happened in the Chesapeake. ... Gulf oysters don't change in flavor throughout the year as much as northern oysters. They are a little fatter in winter, a little thinner in summer, but always mild and somewhat soft – they relax on the half-shell in a way cold-water oysters don't." In recent years, Gulf oysters have moved from generic labels to regionally associated by their bay, just like their more established New Englander cousins. Saybounkham believes that oysters from San Antonio Bay and Galveston Bay are the best because the mud and soil are "good and salty."

While Deckhand prefers wild, oysters also generally thrive in farmed scenarios, because they don't need to be fed and the waters are often still oceanic. Still, there's something to be said for the natural migratory practices of wild oysters. In decades past, the "R" rule suggested oysters never be consumed in months that didn't end in R, because of water salinity and temperature. While that's not as hard and fast a rule these days, the oyster season for the Gulf remains November through April or early May. They're best during that time, but fine year-round.

Saybounkham takes pride in his offerings, and he's intentionally designed a casual and relaxed atmosphere, a Cheers of sorts: "We're nothing fancy over here. Everybody can come." He trains his shuckers in quality over quantity. "Our oysters, I take them personal. The oyster shucking is personal. I don't need the [shuckers] to shuck real fast; I want them to make clean cuts. We place the oysters on the plate very nice and neat. People look at that and they feel comfortable right away. It makes a big difference."

Don't be so quick to drown the slimy little nuggets in horseradish and cocktail sauce and just slurp it down. A little sauce goes a long way, and it takes a few good chews to break into the sweet muscle and find the individual flavor. Saybounkham's special Deckhand sauce uses Thai chiles, garlic, salt, lime juice, and a secret ingredient. Don't drain that liquid pool in the shell, either; it's called the "liquor" and it's liquid gold flavor. Finding a preferred venue and favorite flavor takes time and patience, and dozens of ice-cold oysters on the half shell. Let's hope someone organizes a raw oyster pub crawl stat, complete with Prince tracks at each stop.