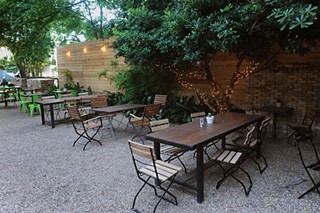 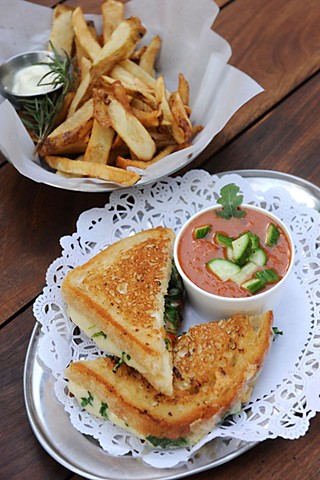 I know I wasn't responsible for the setup, but still I feel like I should apologize to Nashville-based musician Suzy Oleson, who recently performed at Rainey Street newcomer L'Estelle. To get to the Drafting Room, the bar portion of the space, I had to walk through the middle of her setup and attempt to muffle my voice as I ordered Prosecco just a few feet away – not that the roar of the Parlor Room next door wasn't already making her inaudible. Too bad. As far as I can tell from a listen online, Oleson's roots rock has a backyard feel that could have fit L'Estelle like well-worn denim. 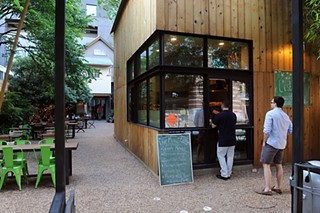 I can't damn L'Estelle on acoustics – after all, it's not a music venue – but the awkwardness of the performance is indicative of a concept that tries to do too much. I'm not sure if owners Craig and Holly Nasso have any previous hospitality experience, but there does still seem to be some trial and error at play – the most notable of which is the estrangement between the two anchors of the business. Although L'Estelle and the Drafting Room are owned and operated by the Nassos, they are operated completely separately, down to the receipts on Square. Food is ordered at the front house, drinks (beer and wine) are ordered at the back house, and never the twain shall meet. I'm sure there's a very good reason for the separation of kitchen and bar, but it flips customer expectation. Even if you want a glass of water, you have to make the trek to the back. It's good they serve comfort food because the experience is disjointing. Relaxation is helped along by the elegant but homey grounds. The mostly white accents and the tall plants provide a lovely oasis. It's no wonder that there are lines at brunch; the space practically demands a mimosa. 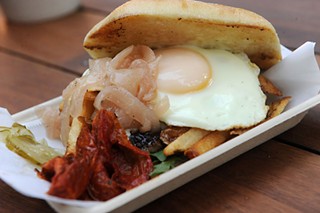 But if L'Estelle does live up to the comfort part of its stated concept, it all but abandons its other part. It's true that one doesn't necessarily have to have a culinary hook to run a successful (and good) restaurant. That's why bland terms like "new American" and "global contemporary" continue to have currency. But if you do state that you serve French-inspired comfort food, it's best if the menu reflects that. Sure, L'Estelle calls fries frites, but that's really where the illusion ends. I'll give the benefit of the doubt and say the Parisian burger ($13, not including the $3 added egg) was named after the elder Hilton sister, because there is really no trace of the City of Light. Why not throw out the food-service telera rolls and replace with a locally baked brioche? Or use a French cheese instead of queso, even something as trite as Brie? Piled high with arugula and fries, the burger was rich and punchy. It's the signature of the late-night menu, but every signature deserves some flourish.

There's opportunity there. I'm not saying that L'Estelle should convert itself into a La Madeleine, but classic bistro fare works well with booze (just ask the Yellow Jacket Social Club), and, for better or worse, Rainey Street is primarily about just that. Well-sourced charcuterie, a tartine or two, and a good Niçoise would keep everything in theme (at least the French part; the website also tells a Southern story) and still be heavy enough for the buzzing hordes. The brunch offerings wouldn't even have to change. Everything about brunch is vaguely French anyway.

It would also be nice if the space offered some sort of dessert. I have seen Instagram shots of cobblers and beignet bites, but we saw no sweets on the menu during our visits. Consistency makes for a more successful restaurant.

But setting aside those terms, the limited menu does have some pleasures. Neither the frites ($6) served with a tangy aïoli nor the sweet/salty brussels sprouts ($7) sprinkled with Parmesan were revolutionary, but solid snacks don't need to be. I'm not sure why the fries were cut in two distinctly different sizes, but hey, L'Estelle, you do you. The simple kale salad (served with crisp green apple and walnuts – $8) and the sourdough grilled cheese (with added arugula and roasted tomatoes – $13) weren't anything a good home cook couldn't make on a Wednesday, but for those who spend more time Favoring than sautéing (I suspect a lot of Rainey habitués qualify), the hominess is welcome. The mustard-yellow hummus (served in a cup with green beans and carrots piled in), however, was off-putting, oddly sweet and suffocating from tahini. And the gazpacho ($5) needed texture and a more assured hand with seasoning. As is, it was like a bland salsa.

All of those problems seem to be the stumbles of folks new to running a restaurant. Despite them, I suspect L'Estelle and the Drafting Room will ultimately wind up a winner, if only as a welcome respite from Rainey's lurk. Craig, an architect, once lived and worked on the property, and his affection for the space shows. But the kitchen has to find more solid footing, and the offerings have to match the brand. L'Estelle has considerable youthful charm, that much is sure. It just needs to figure out what it wants to be when it grows up.