Domain brick-and-mortar is even better than the truck 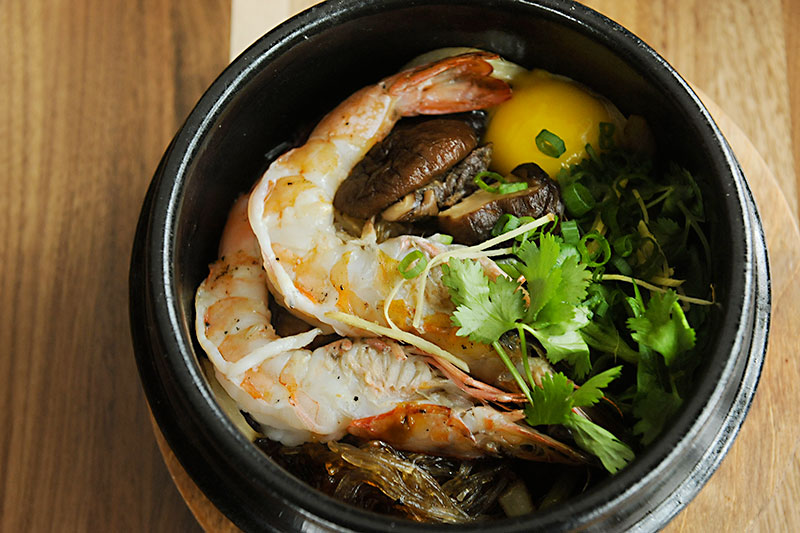 The biggest surprise from a recent visit to Thai-Kun's Domain brick-and-mortar was how empty the dining room was. It was a Tuesday, not exactly a peak dining day, but the rain had settled by then. And besides, we are talking about the long-awaited brick-and-mortar expansion of a food truck that was vaulted to international renown by Bon Appétit in 2014. But for a few long minutes, my date and I were the only ones there. 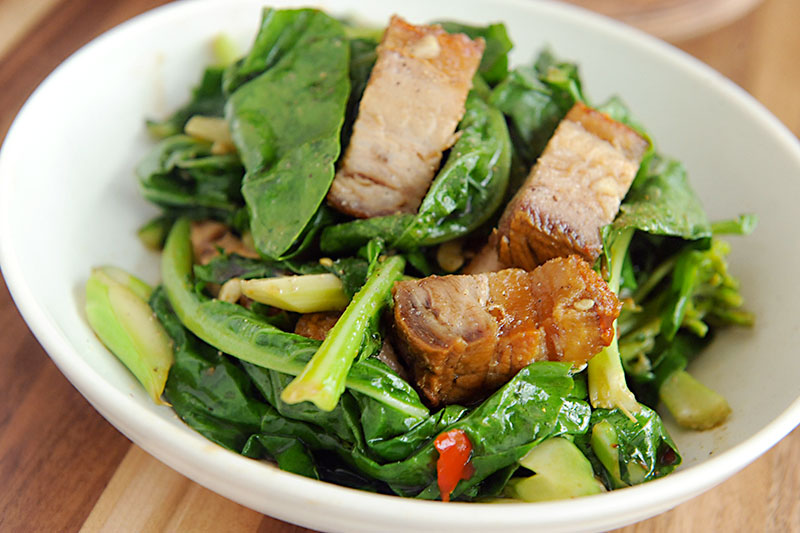 I'm not sure if it was a result of location. Rock Rose is still finding its sea legs as an entertainment district and, for Central and South Austinites, the prospect of driving MoPac is hardly appealing. But we still manage to make the trek when we want to line our closets with H&M or Zara. It might be a tremor from Paul Qui's recent arrest on assault allegations, after all Thai-Kun is part of the East Side King empire and many swore (at least on social media) to no longer patronize any related interest. That would be a shame, because organization structure and Peelander Yellow iconography aside, Thai-Kun is the triumph of chef Thai Changthong. 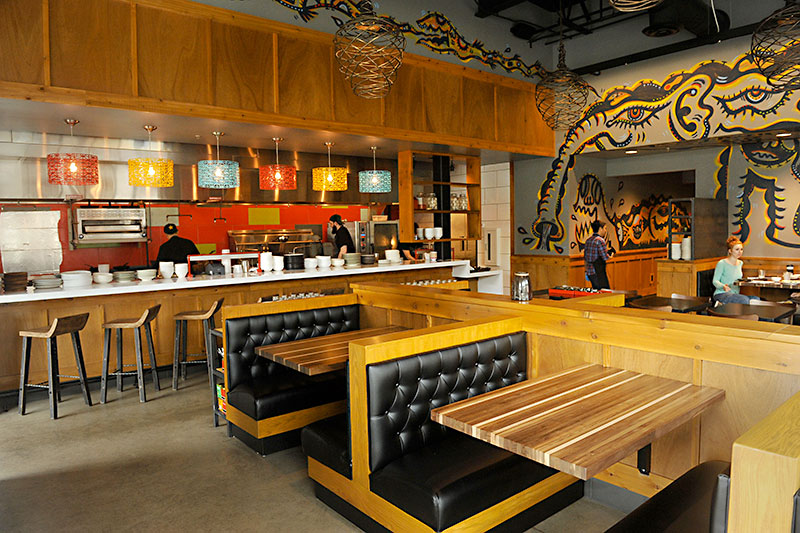 Few chefs working in Austin have the mastery of flavor that Changthong shows in even his simplest dishes. Thai-Kun works within a traditional Thai framework (Changthong has long called it "O.G. Thai") and doesn't really make concessions on the Scoville scale, but even setting aside all that heat, there's plenty of electricity. The papaya salad ($9) is one of the spiciest things on the menu (we wouldn't finish it in one sitting, however much we wanted to), but neither the pungency of fish sauce, the clarity of lime, nor the fruit's natural sugars were dulled. Chinese broccoli ($12) was a slower burn, allowing us to go deep into the fathoms of the oyster sauce. The pork rib soup ($13) was luminous. Perfumed with lemongrass and burnished with makrut lime, it has an extra, unexpected crackle from a scattering of toasted rice powder. 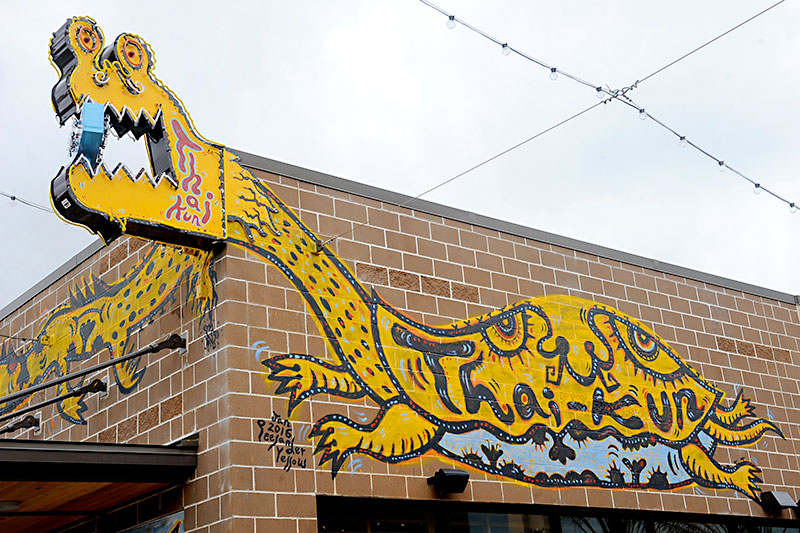 Even at some otherwise very good local Thai restaurants, texture is a bogey, hiding in menus laden with swarms of curries and hot pots. But Changthong is just as adept here as he is with taste. Chicken skins ($6), marinated first before frying, are denser than some of the chicharrón-style garnishes seen on some Austin menus, allowing for more (pleasant) gaminess. Square pan-fried chive cakes ($5) maintain a brittle crust, even while sitting in a pool of vinegar and soy. The server recommended dumping the juicy, accompanying Granny Smith salad (similar to the papaya but less incendiary) on top of the fried whole fish (branzino to be exact – $28), but somehow that did nothing to sog up the skin. The fried chicken ($10), served at lunch, easily bests ESK's fabled kara-age. 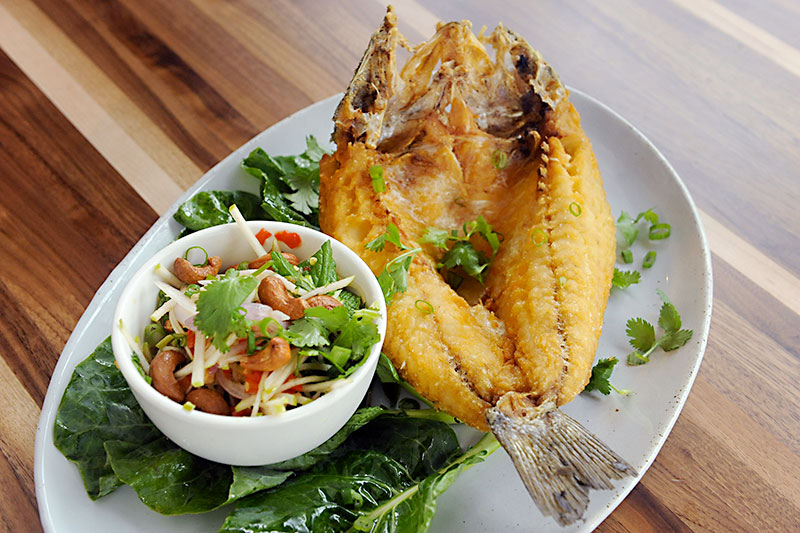 Besides the sunny whole fish and the delicate crab rice ($16), most of the dinner entrées are a little headier than the generally bright appetizers and "traditional dishes," where even sausage is fermented and bright. Heartier appetites will appreciate the rib eye ($28), served with a dried chile dipping sauce and plenty of herbs, and the clay pot ($19), swimming with prawns and pork.

The former appears, simplified and with perhaps a less dignified protein, as grilled beef ($12) on the lunch menu. That experience is closer to the food truck (the restaurant transforms from full service at dinner to counter service at lunch), although my favorite bar snack, grilled bread with peanut sauce, is missing from the menu. No matter, the black noodles ($10) remain. It's changed a little: The beef is replaced by pork, meatballs, and liver, but the sweet, rich soy sauce is still luxurious. The truck's fish cakes change a little too, here as fritters topped with a sweet-and-sour cucumber relish. The khao man gai (the Thai version of Hainanese chicken rice – $11) is still on the menu too, blessedly unchanged, and still as comforting. If I lived and worked closer, I would be there three times a week.

So why isn't this restaurant packed (even at the busier lunch there was no wait at peak hours)? It's hard to tell. It has everything going for it – a bright, contemporary interior, a welcoming patio, and a thoughtful selection of beer, wine, and saké cocktails. Hopefully, my visits were outliers and the crowds were discouraged by the spotty rains. Hopefully, it is near impossible to get in on a Friday night. But if this is the status quo, I would be severely disappointed. This is one of the most promising debuts of 2016, with an accessible price point to boot. Changthong is undeniably one of our city's ablest chefs. If we can't support his restaurant, well, we simply don't deserve to have the best.