The next generation in Austin speakeasies 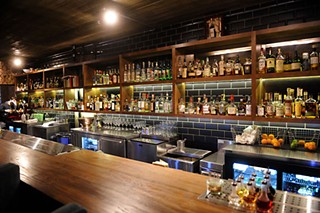 It's little wonder that nightlife keeps returning to the concept of speakeasies. As with music or fashion, the closer a bar veers toward respectability, the less sexy it seems. An affair held in the vinyl-upholstered hotel bar of a Holiday Inn hardly counts as an affair at all. Leave those to beige middle managers and Hollister-clad tourists. True illicitness demands dim lighting and unmarked doors. And ice that clinks instead of rattles. 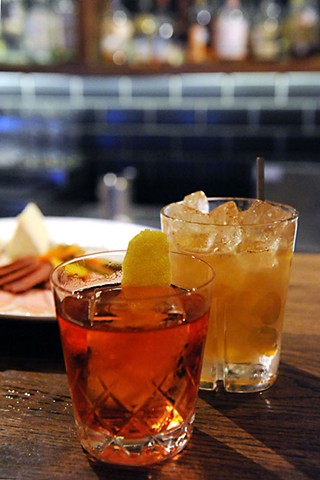 Small Victory may have an annotated cocktail menu, but owners and hospitality vets Josh Loving and Brian Stubbs seem to understand that the appeal of an evening out isn't only about what a bar is serving. The scene at the Seventh Street speakeasy is winkingly dishabille, from the nearly unmarked door to the ice-blue crushed velvet of the long banquettes, and the wallpaper – Dan Funderburgh's "City Park" for Flavor Paper if you want to Google it – folding renderings of rats, pigeons, and fire hydrants into a traditional damask. At our last visit during the height of South by Southwest, a tabletop Christmas tree still twinkled on the bar counter, giving the room the feel of Lala's after a good scrubbing. 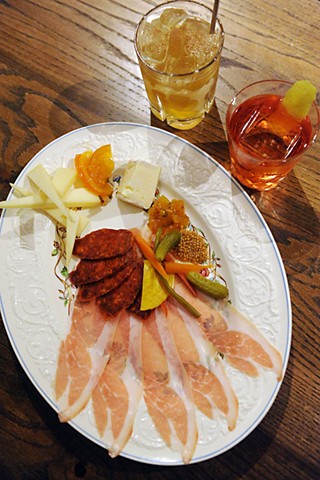 Still, atmosphere only goes so far with our city's increasingly sophisticated craft cocktail palate. There, Loving is certainly no slouch, with a decadelong hospitality career that has included stints at Fino, Vino Vino, Midnight Cowboy, Weather Up, McGuire Moorman, and Half Step – where he led the much ballyhooed ice program. His approach at Small Victory is historical, drawing from recipes developed not only from the voguish period directly prior to Prohibition, but the full craft canon. Each drink is listed on the menu with an illustration, the recipe, a contextual blurb, and a citation. It's geeky, but charmingly so.

The martini menu is case in point. Presented as a flow chart, it helps drinkers cut through what they think they want to what they actually want. There's a refreshing lack of snobbery here. The chart lists both gin and the much-maligned vodka. Dirty isn't a dirty word either, they'll just steer you to a spirit that doesn't interfere with the brine.

The bar opened with a very limited menu of basics like the Manhattan and Sidecar, but has since expanded to a full range of martinis, cocktails, and punches that cover a wide range of personal tastes. Those wanting something more fruity can choose from a pair of reworked tiki standards. His Hurricane ($11) removes the treacly, artificial sweet of Bourbon Street with a house passion fruit syrup. The Singapore Sling ($12), a grenadine atrocity through much of the latter part of the 20th century, reclaims its more sophisticated roots.

The Dama de la Noche Crusta ($14) has a similar tropical feel – pineapple and lime juice, curaçao, Angostura, and orange-flower water anchored by cognac – as does the Daisy de Santiago ($12), using the base trio of the daiquiri (rum, lime, simple) with soda and a yellow Chartreuse floater.

Brown liquors are well represented with the Maple Leaf ($12), a fairly doctrinaire interpretation of the spiced bourbon cocktail with lemon, real maple syrup, and a dusting of cinnamon. Scotch and sherry combine in the Artists' Special ($11), with a quick swap of house grenadine for red currant syrup. The foundational flavors will be welcome to any sour fan, but the sweet sherry evens out the tart. Prefer tequila to whiskey? Go for the Rosita ($13): First recorded in an Eighties Mr. Boston guide according to the menu, it's a wonderfully complex blend of reposado, Campari, Italian and French vermouths, and bitters. Fans of boulevardiers or negronis should order it in twos.

Be warned, however. Not all of the cocktails are booze-forward, but they all pack a punch. Small Victory does serve food – Antonelli's cheese (natch), charcuterie and house-sliced ham, olives, and nuts – but you might want to line your stomach before settling in a booth. Granted, it would be difficult to squeeze in a raw bar or any sort of hot food offerings in the micro space, but some good, crusty breads and quality butter would augment the careful sourcing of the current list, and possibly prevent a few stumbles down the stairs.

We'll add that to our wish list, but it's hardly a stumbling block. There's few bars in town with the commitment to quality that Small Victory has. I am hard-pressed to think of another cocktail bar with an actual wine program. But somehow Stubbs and Loving were able to pack a whole lot of seriousness in a space that never feels academic. That's no small feat, no matter how they chose to name it. 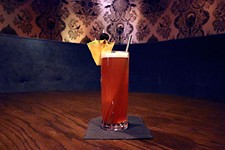 Drinking Local: A Cocktail’s Footprint
Where in the world are these cocktail ingredients from?