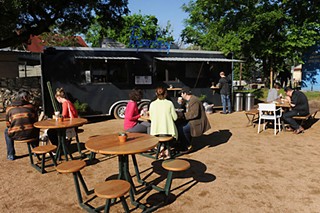 Whether it's the most important meal or not, no American meal carries as much currency as breakfast. It's the daydream innocence of Fifties diners and the lonely comfort of Eighties cartoons. It's the promise of stability for Holly Golightly and a source of mocking for Kurt Vonnegut. When the writers of Parks and Recreation needed to reconcile Leslie Knope and Ron Swanson's friendship before the series finale, they did it through breakfast. 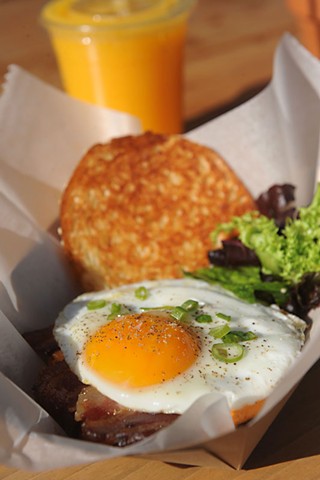 Maybe we can blame all that cultural weight for breakfast being a bit staid. Even in the most innovative culinary capitals, breakfast remains largely French toast and Benedicts, bacon and eggs. It's all very reassuring, but sometimes one longs for a little variety in the a.m. meal that isn't leftover pizza. Paperboy, the cult trailer from owner Ryan Harms and Odd Duck chef Zechariah Perez, doesn't throw out the rulebook entirely. It's still sandwiches, coffee, and hash. There's still bacon and eggs. But the Eastside breakfast spot works within those forms to break through the cliches.

Both of the sandwiches, served on toasted brioche, deliver brisk flavors. The B.E.C. ($7) starts with thickly sliced bacon and a picturesque sunny-side-up egg, then adds the tang of pimento cheese. The heartier steak and egg ($9) adds flank steak to the egg, all roused with a smear of chimichurri mayo. The roasted sweet potato hash ($7), with chunks of braised pork belly and a poached egg, has just the right serving size to save the heavier ingredients from hijacking the morning. The vinegar zip of the coffee mayo keeps the starchy and fatty ingredients from plodding through the palate. 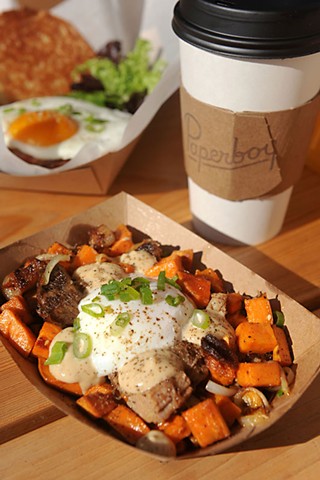 The two toasts are lighter still. Keeping with Austin's seasonally focused ethos, the exact mix of toppings rotates according to vegetable and fruit availability. On our visit, the sweet ($6) was more fresh than treacly, with a bouncy mix of tangerine and strawberry, held down with ricotta, granola, and a drizzle of honey. As with the hash, a bright element saves the savory toast ($7) from being buried. In this case, pickled carrot susses out more spice from goat chorizo, keeping the slick of grease from overwhelming the dish. Eaten with a seasonal side salad ($3) featuring field greens and radish, it's an essential kick-starter. And it couldn't be more well-matched to the outdoor setting.

Atmosphere is mostly beside the point with trailers, but like the now-closed trailer location of Ky¯oten, Paperboy has transformed the grounds far past its empty lot roots. There's uncommon attention paid to the total guest experience from the mix of seating (schoolhouse sets, traditional picnic, and scattered white chairs) to the grounds (graphic gravel and sand cordoned off with a metal divider and scattered with desert plants). In the early spring, it was a good place to warm up with a cup of coffee. In the summer, it will be great for absorbing vitamin D before the afternoon scorch. Whatever the weather, with its midcentury soundtrack, it's not the type of place where you'll want to rush.

One quibble: We wish there were a few more drink options other than hot coffee, cold brew, and freshly squeezed orange juice, even if across-the-street Quickie Pickie readily fills in the gaps. We did sneak a bottle of bubbles one visit, and although we were not stopped, we are not altogether sure if that was bad behavior*. But how else were we supposed to turn breakfast into brunch?

*Although Paperboy assures us that they are in process of getting a BYOB permit from the city, they do not have one just yet. Don't make the same mistake we did. If you want a mimosa-filled brunch, take Paperboy to go.