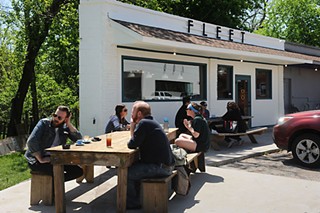 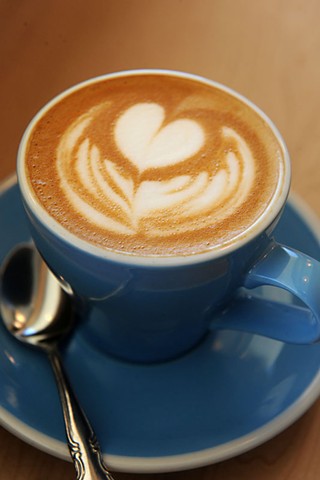 Coffee plants take years to grow and months to harvest, then the beans travel thousands of miles to reach a barista. Then that barista spends about 35 seconds pulling a shot of espresso, which is enjoyed in a few fleeting sips. 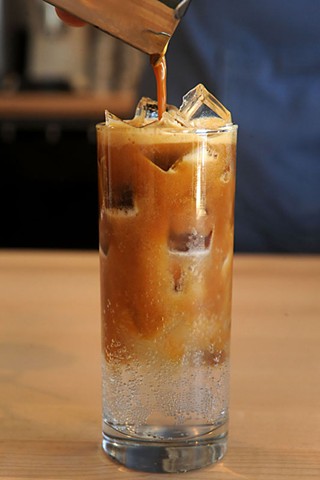 Coffee's ephemeral nature is half of the story behind the name of Austin's newest cafe, Fleet Coffee. The other half stems from co-owner Patrick Pierce's father, who operated an 18-wheeler repair company called Fleet Maintenance. 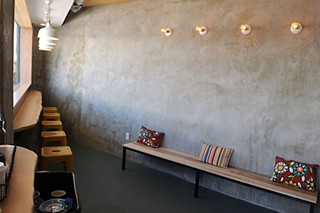 If you've visited Caffe Medici over the last decade, you've probably run into Pierce. Except for a two-year gig consulting for robotic coffee kiosk company Briggo, he's worked at Medici in some capacity since 2006, where he met his business partner Lorenzo Perkins. Perkins also did time as a barista at Medici before becoming Cuvée's director of education. Between their work at Medici and Cuvée, the pair helped establish arguably the two most influential Austin coffee companies of the last decade. 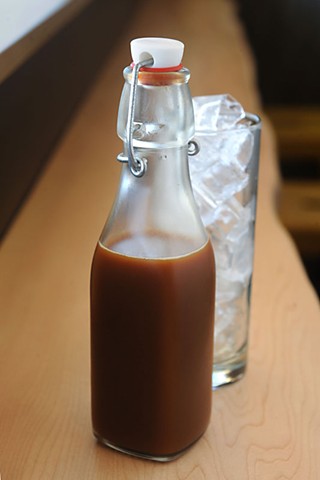 Their new shop on Webberville Road boasts all the trimmings you'd expect from serious coffee pros with eyes for design. The cornerstone is a classic La Marzocco Linea espresso machine, the same model that both Pierce and Perkins learned on, which sits on blond maplewood countertops reclaimed from Caffe Medici on Guadalupe. The rest of the tiny, V-shaped, 364-square-foot cafe bears little resemblance to its past life as Superhuman Bean thanks to design work from Brockett Hamilton of Creature, whose use of stucco and zebrawood accents makes the space feel both inviting and utilitarian. Although they do have wi-fi and outlets, the space is designed as less of a laptop campsite and more of a stop-and-go cafe.

"A lot of inspiration for the space was from a 1950s train station cafe. You go in, get your coffee, chat with the barista and the person next to you, then you go. It's a little romantic moment that you experience, then go on with your day," says Pierce.

Expect perfect espresso shots using beans from Madcap Coffee of Grand Rapids, Mich., as well as offerings from two more roasters that will rotate quarterly (currently Olympia Coffee Roasting Company and locals Wild Gift). Like any good third-wave shop they have the requisite fancy pour-overs (both Kalita Wave and Chemex), but also offer regular batch-brewed coffee and are just as happy to make less snobbish drinks like mochas with house-made chocolate syrup. For their iced coffee they've opted against the typical overnight toddy in favor of a flash-brew method that avoids the dusty stale flavors that often accompany cold brew, but the main thing that sets the shop apart from the rest of Austin's caffeine peddlers is the "Coffee And" menu.

"Every barista can generally make a good latte," says Pierce, "but what's next? Where is the industry going? With this menu, we're trying to use coffee as an ingredient and not just make the same seven or eight traditional coffee drinks."

Inspired by shops like G&B in Los Angeles, who've built a cultish following for their coffee milkshakes, Fleet tested their experimental menu at a series of pop-ups at brunch spots like Contigo. The standouts that have made it into the shop include the E.T. (tonic water, espresso, lime simple syrup), the Flip-Top (root beer spices, chicory root, espresso, nitro), and their most popular drink, the Morning Ritual, which includes a glass of doughnut-infused milk alongside a chaser of espresso and a doughnut hole. Perkins and Pierce see it as a gateway to specialty coffee for customers with a taste for sweeter drinks.

"If someone usually drinks caramel macchiatos, black coffee or a cortado can be a bit of a shock, so we wanted something approachable and fun," says Pierce.