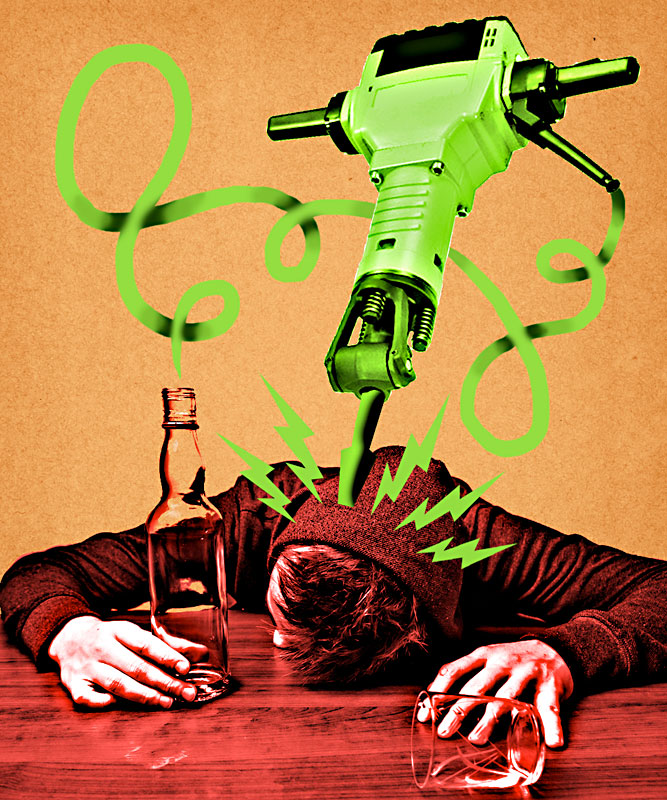 By the time my dad found me, my 501s were soaked. Awkward, gay band geeks didn't turn down invitations to keggers, even if that meant neglecting to let your parents know where you were. So with the unearned braggadocio of a 14-year-old, I set about trying to show I could hold my liquor. That was the manly thing to do after all, and maybe all those stolen sips of Bartles & Jaymes wine coolers were some preparation for an onslaught of Bud Light. I was wrong. Within 45 minutes, I was dry-heaving on a patch of azaleas. Soon, I was waking up to the scream of my first hangover. I deserved it.

Thus began an ignominious career of suffering through the aftermath of slamming Blue Hawaiians at drag shows and thinking André Brut was good enough for brunch. The hangover cure back then was easy – drink a glass of water, sleep in, take a shower, repeat. But then one day that just stopped working. The hangovers got longer, the headaches slammed harder, the stomach did deadlier drops, and no matter how long I slept, I stopped being able to outrun the hurt. What's more, where it once took an ill-advised chocolate martini to ruin a Monday, a Jameson shot suddenly began to taste like regret. I had to get smarter with drinking.

Part of that happened naturally. My palate matured past sugary drinks, I quit smoking, I stopped going out every night. But weddings and pairing dinners happen, and nervous first dates. And let's face it, it's sometimes just fun to overimbibe. So in the interest of science and workplace productivity, I set out trying to find something local that would help calm the deadliest katzenjammer. I volunteered myself for wobbly spins around the dance floor and further spins lying facedown in bed followed by injections of grease, caffeine, and B vitamins. Like with that first hangover, I deserved every aftermath. But at least this time, I won't get grounded.

Hair of the Dog

Culprit: A third pitcher of Lone Star ordered at the HighBall's Black Lodge room in between renditions of Seal's "Kiss From a Rose" and Brooks & Dunn's "Neon Moon"

Hangover state of mind: Taylor Swift when she found out Katy Perry stole all of her backup dancers

"Science": Theories claim that a late-morning quaff may be merely a painkiller or a placebo. One study suggested that a post-drunk drink alleviates early alcohol withdrawal. Wikipedia says something about "alcohol dehydrogenase" and "highly toxic formate." Spooky.

Results: Midway through the drink, I was animatedly talking about how I love pork belly, and Rihanna's Anti, and Garden & Gun magazine. Three hours later, I was gagging on a fish taco and wishing the contestants on American Idol wouldn't sing so damn loudly.

Culprit: A bottle of Duchman Montepulciano paired with Cheez-Its while watching The Bachelor

"Science": Some research has suggested the carbohydrates in a classic breakfast help replenish sugar levels. Eggs also contain cysteine, a purported enemy of the dread acetaldehyde, the production of which some smart people think leads to you feeling like shit.

Results: However delicious Cheez-Its may be, they don't really qualify as dinner. Counter's buttery biscuit, meaty chop, and fried eggs made my empty stomach believe in a brighter tomorrow. The never-ending coffee pour didn't hurt either. Three hours later, I was able to write an article with only three spelling errors.

Method: "Walking" a squirrel-obsessed pit bull on the Shoal Creek Trail on a warm day

Culprit: One last round of well tequila shots followed by a menthol drag on the back patio of Barbarella

"Science": Proponents say that saunas or vigorous exercise help get toxins out of the body more quickly, even if little evidence backs that up. Sweating definitely helps an already dehydrated body become more dehydrated, which can be seriously dangerous.

Results: After briefly considering just letting my body be found in Pease Park, I worked up enough energy to stumble home. After catching my breath, I briefly tried to answer email. The word "taproom" made me feel woozy. Three hours later, I spent 30 minutes trying to write a single sentence.

Method: Before Elixir, an Austin-developed product made initially to prevent alcohol flush

Culprit: A side-by-side cocktail and wine pairing at the tail end of a feast at the Carillon

Hangover state of mind: Stella, before she got her groove back

"Science": B vitamins are needed to break down alcohol, but are depleted when you drink, so an extra dose beforehand is thought to be helpful in breaking down toxins. Other ingredients like mangosteen may help with immunity and liver health.

Results: Although I can't rule out the power of suggestion, I felt significantly less like a Walking Dead extra when I woke up than I usually do, but not exactly chipper. Three hours (and an iced latte) later, I took on the task of reorganizing my shoe collection. I threw out one pair because I couldn't stand looking at them anymore.

Hangover state of mind: Godzilla before she decided to destroy Tokyo

"Science": The hydration power of coconut water is the main player here, but beet is purported to assist with liver functioning. The fructose in the watermelon helps low blood sugar levels, and salt is a key electrolyte.

Results: Although the juice didn't do much for the headache, the dose of hydration jump-started the road to recovery. Soon, I was able to do simple tasks like straighten piles of papers and talk to co-workers without wanting to go on a murderous rage. Three hours later, the headache was gone, but watching Netflix inexplicably seemed too difficult.