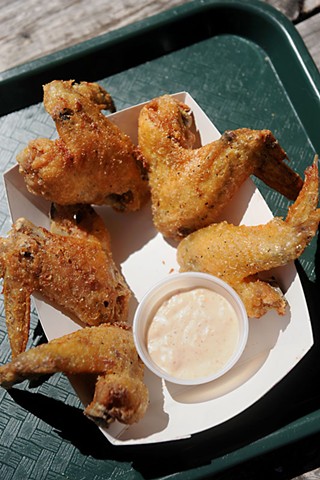 In the current Austin food bacchanal, simplicity can sometimes impress more than spectacle, and new additions to our relatively limited global palate can seem like a revelation. There's not much to Hainanese chicken rice, a dish served at coffee shops and hawker centers throughout Singapore. The main components are just as listed – chicken and rice, served with cucumbers, chile, minced garlic, soy, and an aromatic broth on the side. Artless, yes, but not skill-less. 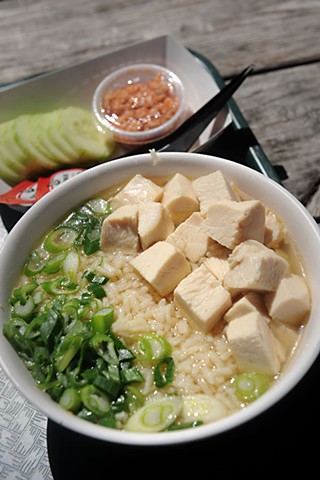 It's a wonder, then, that the dish is a rarity on Austin menus. In cooler weather, it is as comforting as pho or ramen. During allergy season, it is flavorful enough to cut through a stuffy nose. And on a spring afternoon, it is light enough for lunch. Charles Hall, the owner of the NaiNai food trailer on East Seventh, got his recipe from the trailer's namesake nainai, his grandmother Mimi. The soup comes in two versions (both $10). NaiNai chicken rice is served as a prepared soup, the way Hall ate it growing up, and Hainan chicken rice comes traditionally with the broth on the side. Either way, the home-cooked soul remains in the dish. There's none of the excessive salinity of commercial broth or the dull simulacra of bouillon cubes.

The poached chicken and jasmine rice, though both nicely prepared, are mostly a tabula rasa. For more oomph, mix soy with the provided "sauce," made with chile, minced garlic, and ginger. The only real disappointment here is that the trailer uses commercial packs of Kikkoman instead of a robust Chinese dark soy, but that's a quibble. There are not even those very minor reservations about the confit chicken wings ($2 per wing). A lemon pepper dry rub – made more sophisticated with ginger – takes the place of breading. It's so full of flavor that it doesn't need the spicy ranch sauce, but few Texans are going to turn that down.

Many food trucks bite off more than they can chew, so Hall's devotion to doing two things well is admirable. Still, a little more choice would be nice. In many hawker stalls, add-ons such as liver, kidney, and tofu are offered, along with a variety of chicken cuts. Hall does offer Japanese onsen eggs ($2), which add some richness for those wanting a heartier dish, and that break from tradition (hard-boiled eggs are more common) presents an opportunity. Non-doctrinaire add-ons like fish balls or chashu pork could provide the variety that will help ensure customers keep coming back for more. There's some indication that's just the plan. Of late, NaiNai has been offering specials with beef short ribs, fried eggs, and chicken katsu.