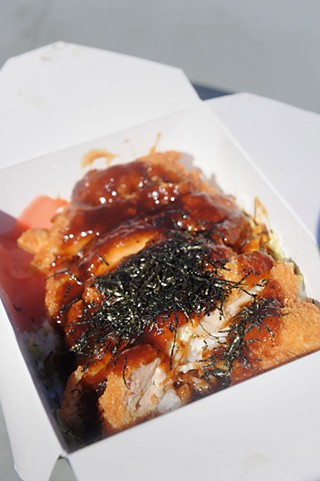 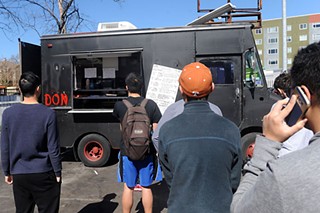 Even in a town as fond of lollygagging as ours, it is worth noticing when each day at about 11:30am, a swarm of people (mostly UT students) gather on a concrete lot. The focus of this particular ritual is Don, an unassuming Japanese food truck parked (oddly) beside udon restaurant Daito, which has been drawing enviable crowds since opening, largely based on word-of-mouth. 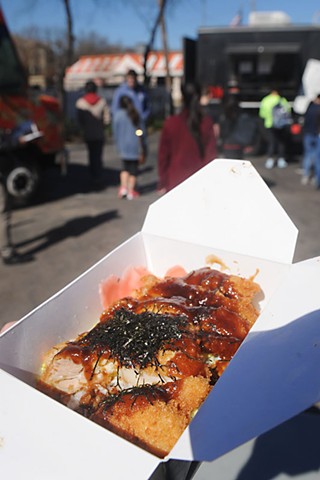 Part of that buzz is the price, certainly. You can get lunch and leftovers for around $10, an increasing rarity in this town regardless of location. But cheap doesn't necessarily invite repeat business, and Don's cult wasn't solely built on value. Yes, a $5 order of chicken kara-age includes enough tender pieces for a full table, but at $5 they still could have sold scads without giving East Side King a run for its money (we'll have to consider that one in a future AC Food Fight).

That quality continues to the donburi, the main event at the trailer. Each of the five bowls has the same basic components: rice, iceberg lettuce (we would prefer cabbage), a protein and sauce, nori, pickled ginger, and shallots and/or green onions. The least impressive of the batch are the pan-seared chicken ($5) and the highly seasoned ground beef ($7), both drizzled with a sweetish teriyaki. Neither are bad, nor even mediocre, but they don't do a good job of competing against the other three donburi. Only the most rabid One Direction fans screamed for Louis and Liam.

But then there's the meltingly tender pork belly ($9). The natural sweetness of the meat pairs perfectly with the mild sour of the sauce (tamarind?) and the brine of the nori. The Don ($5) is equally well-prepared, offering a choice of chicken or pork breaded with panko. Of the two proteins, the tonkatsu excels – its texture somewhere near German schnitzel. The best of the bunch is the Veggie King ($5) with plump squares of agedashi tofu. That dish is made even more precious from its scarcity: It took two in-person visits and three Favors before I could sample it before it sold out. It stands up well on its own, but the adders ($1 each) work with it nicely. We especially like the half of sliced avocado and the oozy onsen egg.

But the best thing about Don (and many of the latest crop of "it" trailers) is that it is a much-needed expansion of our culinary identity. The sameness of our culinary scene is our greatest roadblock to being a true world-class food city. By selling out on a nearly daily basis, Don proves that Austin is ready for more diversity (both in cuisine and price point). Restaurateurs would do well to remember that the next time they start considering opening another upscale New American concept. Don's fan base proves there is room in the city for food that is just good.