SquareRüt spreads the gospel of kava 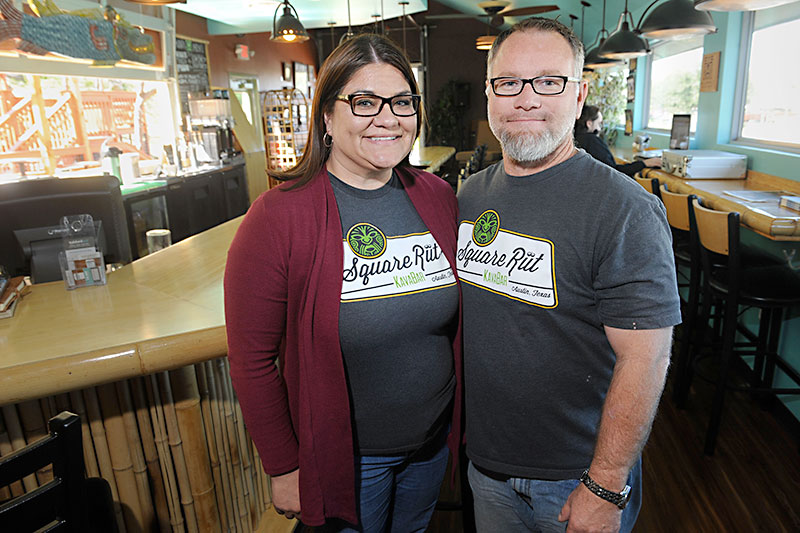 Riding in the bike lane along Barton Springs Road recently, I noticed a new cafe had turned the lights back on at the old Flipnotics space: SquareRüt Kava Bar launched their newest location mid-January. I was familiar with the relaxing and mood-enhancing beverage by name only, but had yet to taste it, so I met with co-owner Tracy Moreno to learn more about the tonic that has been revered in the South Pacific for over 3,000 years.

Used ceremoniously in the islands, kava-kava (or simply "kava") is the beverage derived from the root of the namesake tropical shrub. It has gained popularity stateside for its properties widely purported to relieve stress and anxiety, ease muscular tension and cramps, and alleviate insomnia and depression. "We're not doctors, so we don't like to make claims," Moreno is quick to point out, "but [kava] definitely takes the edge off." Moreno explains that, unlike alcohol, kava is not chemically addicting and doesn't impair one's judgment or ability to operate a vehicle. "We get a lot of the sober community. You still get that atmosphere of community," she says, gesturing to the groups socializing in the relaxed, open-air cafe. "Everybody knows your name around here."

SquareRüt offers three kava varieties on tap, served chilled, in coconut shells. All are imported from Polynesia or Melanesia in dried root form, and then soaked for two to three days, blended, squeezed, then strained, and finally kegged. "Tonga" comes from the island of the same name and reportedly promotes mental clarity and focus. "Borogu" comes from Vanuatu, and Moreno says this type is felt most in the muscles. "Waka" comes from Fiji and is the cafe's "premium" strain, suggesting both mental and physical benefits. The active ingredients responsible for the anxiolytic effects are called kavalactones, and the first few sips delivered a temporary numbing and tingling sensation to my lips and tongue. Moreno assured me this was normal.

Just as each strain results in a slightly different experience, they also vary in flavor. The chalky beverage is earthy, somewhat nutty, and definitely an acquired taste. My initial impression was that it tastes like water mixed with clay. Many customers who enjoy the therapeutic qualities of kava grow to love the taste, but for first-timers – or those who don't ever grow accustomed – there's an option to add flavored syrups. SquareRüt has also just begun to sell their Lemon Chiller in 16-ounce bottles – it's like a tart lemonade made from pure kava root extract. In the next few months, it will be available in local grocery stores and at farmers' markets, but can currently be purchased at both the Barton Springs and North Lamar cafe locations.

Upon mentioning to a friend that I was writing about kava, her all-knowing eyebrows arched: "Ahhh! Spanish Champagne ...." No, I had to clarify. I wasn't talking about sparkling wine. It's apparent that kava-with-a-k isn't yet rooted in most of our vocabularies. But Moreno and her husband, co-owner Scott Pingel, are doing their part to educate Austinites about this unique elixir. And if kava is not your cup of tea, you can always grab a coffee and breakfast tacos from SquareRüt, too.