Inconsistent dining for the well heeled

If Bravo TV ever decides to film The Real Housewives of West Lake, I suspect the cast will spend some time throwing drinks at the Hotel Granduca's Visconti Ristorante. I was immediately taken aback by the cultivated sense of exclusivity from the start. Guests are forced to pay $10 for valet parking even when a near-empty garage is just steps away. What if I just wanted to stop in for a quick drink? 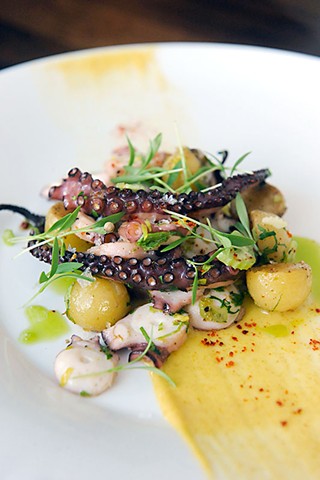 That would require a visit to the rowdy bar area. The noise from the aperitivo happy hour flooded the formal dining room obnoxiously during our dinner visit. The hostess could only give an apologetic, helpless shrug. But get past the hubbub and a calmer experience awaits. Italian dining is known for its warm hospitality, and their front-of-house staff channeled that expertly. Throughout lunch and dinner services, it was a joy to watch their fine tuned dance. Water glasses stayed filled, plates were set down in synchronization, wine choices were explained thoroughly, shared entrées were split without being asked – they clearly took pride in addressing each detail. That said, be prepared to stay awhile. The kitchen seemed to be in no rush, so set aside three hours for dinner and two for lunch, if you can afford to.

The food, unfortunately, was less consistent than the service. Executive chef Tom Parlo is a seasoned culinary director whose repertoire includes the Mandarin Oriental Miami and St. Regis Bal Harbour in Miami. Here today, he styles a northern Italian menu with an emphasis on tradition. Dinner began with spuntini (small snacky bites) and a selection of salumi and formaggi. The testa in cassetta (house-made "porcelet" head cheese, $8), paired with a finely balanced barrel-aged rye fig Manhattan, was a welcoming start. A thoughtful drizzle of aged balsamic and crisp house pickles cut through the refined charcuterie's richness. But when I transitioned on to the antipasti, the inconsistencies began to surface. The polpo (grilled octopus, $16) was tender and nicely charred, livened by diced celery and a tangy Meyer lemon vinaigrette. While the mini melon-balled potatoes were creamy and fitting, the micro-cilantro felt overpowering and out of place. Served as four skewers with lemon yogurt and eggplant caponata, the lamb spiedini ($15) were properly grilled and seasoned with Mediterranean spices. But again, the aggressive micro-cilantro raised my eyebrow. Mint seemed more appropriate in the application. Saffron and a tickling heat accented the zuppa di pesce's ($16) seafood broth beautifully, but the yellowtail tuna was tragically overcooked. 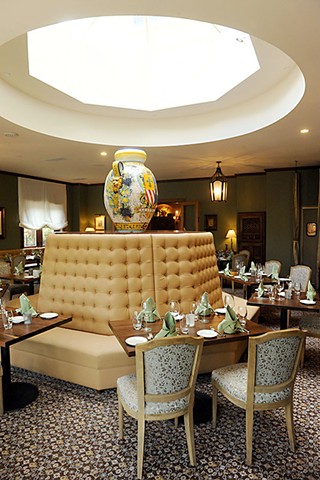 The pastas, too, were hit-and-miss. The tonnarelli alla carbonara ($16) and gnocchi di ricotta ($17) were both dressed with a heavy hand. The noodles, cut by rolling through a stringed frame that resembles a guitar, had a wonderful al dente texture. Unfortunately, it was so salty that it became inedible toward the end. The guanciale was rendered so thoroughly that it studded the pasta with briny toughness. The buttery gnocchi bordered on cloying and needed a cleansing grate of citrus zest instead of weighty ricotta insalada. There really can be too much of a good thing. Likewise, during lunch, the margherita pizza arrived at the table an oily, soggy mess. It was so overloaded with congealed Parmesan cheese that any hint of mozzarella was unidentifiable. The chicken liver tortelli ($17), on the other hand, were delicately shaped and cooked to ideal doneness. The roasted apple, crispy sage, and toasted pine nuts were the excellent counterparts to the velvety filling.

The contradictions were just as apparent during the secondi. At $34, the capesante was a generous plate of well-seared porcini-dusted scallops on celery root puree. The first few bites were easily delicious, but it soon became so one-note in texture and flavor that neither the shaved fennel nor pea greens could save it. But I could not get enough of the Milanese impanata ($42). The hefty veal chop was crisp on the surface and finished to the ideal just-pink temperature throughout. The carciofi alla Giudia (fried "Jewish-style" artichoke) and a handful of arugula were all that was needed as accompaniments. It showed that a little restraint goes a long way.

Given the vast variation between dishes, I figured dessert could settle the score, but that, too, was no easy task. Once again, the complex dolces ($9) had a lot more flair visually than in taste. Both the budino and meringata featured interesting sounding components like pistachio custard, buttered popcorn cream, and hazelnut meringue. The outcome was pretty plates that lacked temperature contrast and textural interest. However, the gelati and sorbetti were gorgeously smooth and intensely flavored. The passion-fruit sorbet still sticks in my mind.

Each time I walked out of the restaurant, I felt a sense of unsettledness. Considering how brightly the successful plates shined, I wished that they simply scratched out the mediocre, distracting counterparts. Their spot-on service made me want to love them but, especially at that price point, I knew I could only do so with one foot out the door.