South Congress bar and grill is pleasingly out of time I'll admit that I was primed to like the atmosphere of New Waterloo's not-quite-a-steakhouse Central Standard from the start. Few design eras are quite as appealing as the cocaine Seventies, and Central has Halston slink right down to the font. Depending on your opinion of South Congress' latest permutation, all the brass and glass can be fitting or discomfiting, but why look for Betty Ford slumped in a corner when you can watch Bianca Jagger riding in on a white horse? Los Angeles-based design firm Studio MAI and the in-house Waterloo Workshop achieves the look with the help of the Michael Hsu Office of Architecture and a flirtation with the less perennial parts of the decade – avocado, amber glass, fluorescent lighting. Possibly Naugahyde. There's a Wes Anderson-like attention to period detail, from the navy blazers at the host stand to the paper coasters served under cocktails, but contemporary finishes like handmade Japanese tile keeps it from being too much a Diners Club ad.

The generally retro mood carries over to the food, which wouldn't be out of place at the opening version of Windows on the World save for a few voguish ingredients like fennel pollen and Castelvetrano olives. Much like its sibling restaurant in the South Congress Hotel, Café No Sé, Central Standard is less devoted to making things new than to doing things well. But where No Sé is best in the (theoretically) a.m. hours, Central is very much about the occasion of dinner, eschewing shared plates for thoroughly American hearty mains, proper salads, and a few well-composed but secondary sides. 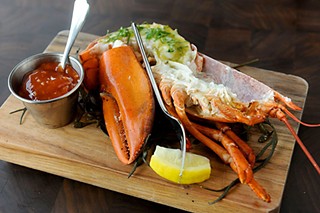 In that mode, chef Michael Paley's starters don't really break any rules. Mussels ($18) float in white wine and butter. Wagyu steak tartare ($18) is served with the customary egg yolk, grilled rustic bread, whole grain mustard, and a tangle of fried shallots. Neither will disappoint lovers of their forms, but go with the marrow ($12) while the weather is still temperate enough to accommodate it, or the potato bread ($9), a gossamer loaf served with a debauched crème fraîche butter. That and the deftly salted Little Gem Caesar ($13) – an almost deconstruction with sieved egg and whole anchovy – would make a plenty filling dinner (or in our case, a hearty accompaniment to director of operations Nate Wales' headier cocktails like the Old Fashioned-like Salted Caramel – $13). But fullness isn't really the point, even if that's all but guaranteed. The point is indulgence, and the very attentive service (we kept lucking into the same pro server) is more than happy to let you linger. The raw bar, featuring East Coast oysters and plump Gulf shrimp, is as noticeable as the decor. If you are feeling flush, order the Standard Platter ($110), a towering seafood Babylon that adds a poached Maine lobster, a bowl of the daily ceviche, and Middleneck clams to the mix. It's not an everyday dish, certainly, but it doesn't have any of the look-at-me audacity of some similarly priced dishes around Austin. The platter is accompanied by the usual assortment of lemon wedges, cocktail sauce, mignonette, and horseradish, but the quality of the shellfish is so high that soon you'll be happily slurping without bothering with ceremony.

After that, you might not have enough room (or money) for an entrée, especially when there is nothing in the hearth or mains section that could really be called light. The striped bass ($30) is more toward the left end of the dial, but it's served with a slightly too soft mirepoix-ish trio of carrots, celery, and artichoke. The land proteins waste less time on vegetables. There's a woodsy addition of thyme and oyster mushrooms with the New York Strip ($38) and charred leeks with the Berkshire pork chop ($34), but both of those just barely hoist the rich meats. For that, you'll have to rely on one of the sides, like the lemony broccolini ($7) or the sweet potato ($8) served in jacket, but even that is loaded with chorizo and more crème fraîche.

But the heaviness of the dinner doesn't mean that Paley is all bludgeon. Dinner may be Central's main focus, but that doesn't mean that brunch is an afterthought. Some of the menu repeats, but many of the brunch-only dishes have an altogether lighter touch than the club food served in the evening. Dishes like winter citrus ($9) – a simple salad of blood orange, grapefruit, and orange sitting in ricotta and sprinkled with thinly sliced toasted almond and pomegranate – show the kitchen's versatility. There are still plenty of plates designed to soak up Bloody Marys, but those too are geared to start the day. Shrimp and grits ($22) uses a lot of fat, from pancetta to butter, but still sparks. Eggs Benedict ($15) gives the old dish some new vigor with a latke, smoked salmon, and dill hollandaise.

Whichever service, pastry chef Amanda Rockman once again proves that she is at the height of her powers. For brunch, her classic cinnamon roll ($6) was almost cartoonishly good, and the daily cake doughnut ($5) with large flakes of toasted coconut writes the textbook. Doughnuts also appear on the dinner menu ($10), cinnamon-sugar this time, and served with tonka bean cocoa nib ice cream and espresso. Reinvented classics are the base of the dinner dessert menu from a lemon tart ($11) with Chantilly to a carrot pavlova ($11) with olive oil ice cream and cream cheese. The desserts are beautifully composed but straightforward, very much in the school of Emily Luchetti, with whom she worked during culinary school.

You can tell a lot about a chef from where they have been. Rockman's formative stint at Farallon, and Paley's early years working with Daniel Boulud surely informed some of the quiet classicism that shows in both chefs' work. It's not hip, but Austin doesn't need any more hip. But it does need a lot more timelessness. Let's hope Austin's volatile hospitality scene lets Central clean the clock.