About halfway into a trip to Proof & Cooper in Dripping Springs, I thought, "Why the hell am I reviewing this place?" I had heard some good things, and enjoyed their bite at Big Reds & Bubbles, but the online menu of homestyle classics like deviled eggs and fried chicken wasn't exactly breaking news, and the only places 1886 Management owned were a couple of bars (Twenty Two Eleven and the Blackheart to be exact). Plus I'm a terrible driver on familiar ground, much less the winding roads of the Hill Country. White-knuckling isn't the best prelude to relaxed dining. 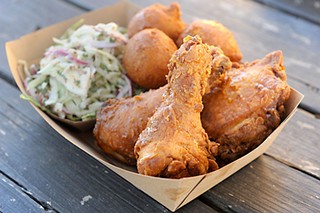 But then the staff greeted us with a warmth that one rarely sees in Austin proper. And the fried pickles ($5) arrived. As long as the texture reasonably holds up, I'll admit that I am not too picky about any food that is ultimately dipped in ranch. But Proof's version was made with house bread-and-butter chips, and the ranch could cause mass emigration from Hidden Valley. The cocktail the Governor ($8) was a Southwestern mint julep using peach- and habanero-infused Buffalo Trace. Given the ongoing population rush and the relatively lagging rush to feed it, Proof didn't have to put so much process into such simple fare, certainly not at that price point, but I soon forgot the busy thoroughfare yards away. Everyday pleasure seems to be the point with chef Russell Dougherty's menu, composed of bar snacks, a few sandwiches and salads, burgers, and fried chicken. Simple things like deviled eggs ($4) are done exceedingly well, in this case with added pop from smoked paprika. And the chicken gets rightful prominence on the menu. We ordered a mixed basket (one breast, one thigh – $12), served with featherweight hush puppies and tots. The chicken itself had a delicately crisp breading and succulent meat. The only thing missing to my personal palate was a sprinkle of salt. That proved to be a problem with the stuffed jalapeños ($8) as well. The pimento cheese filling was suitably tangy, but the peppers needed more vim. More salt (the crispy bacon crumbled on top provided some) – or better yet, house-pickled jalapeños – would have taken a good dish over the top.

But that was one of a very few minor problems. Another was in the burger. The Texas Wagyu burger ($13) by itself was terrific, topped with pimento cheese and the addictive pickles. The accompanying braised greens were great too, well-seasoned with a touch of sweetness. But unfortunately both of those things were served nestled in paper boats, allowing the green's juices to leak over to the bun. The result was a soggy burger that could have been a showstopper, but was bothersomely sloppy after the first few bites. I appreciate their dedication to conserving water, but a proper plate and bowl would have been nice.

The only other stumble was the Frito pie ($8). The meat part – redolent with dried chiles – made Texas proud, but it was served on the chillier side of lukewarm, providing no heat for the grated cheddar to melt. And again, pickled instead of fresh jalapeños would have added some necessary acid.

The bar program was uniformly excellent, however. Besides the Governor, we ordered a classic Starlite Vodka Moscow Mule ($8) that somehow made Maine Root's ginger beer more pleasantly pungent. The Ricky Bobby ($9) sounded pleasantly trashy (it's a shandy made from Budweiser and Deep Eddy Lemon) but tastes a lot more adult than it sounds. The Old Texan ($10) is usually made with plum-infused Dickel Rye, but for seasonality that was replaced with blackberry and pear. That, and the Jack Rudy grenadine, gave it plenty of sugar, normally something I don't want, but Angostura bitters and fresh mint didn't allow for treacle, and the Champagne topper felt celebratory. I would challenge you to find a better cocktail in the entire Hill Country.

That detail was impossible to forget. The stone building screams its location. If you choose one of the tables in the back, Proof & Cooper feels like a lazy day at the ranch, and the easy, understandable food couldn't be more at home with the setting. The care that Dougherty takes with the details suggests he will grow more and more confident as the space matures. But if he doesn't ever change a thing, he has already raised the Dripping Springs bar. And I can think of few things more pleasant than spending a day swimming in Hamilton Pool, then sidling up to Proof's back patio, and sipping Old Texans until the carnival lights come on.