Marching to the beat of their own drum 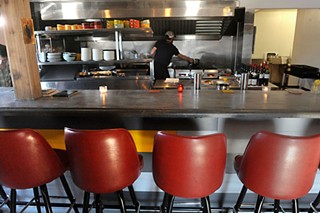 If the success of places like Radio Coffee & Beer and Haymaker tells us one thing, it's that the residents of underserved neighborhoods in Austin will flock to places serving quick, affordable meals and plenty of beer. There doesn't need to be that much thought put into the food. As long as there is food and it is reasonably affordable, customers will more than gladly skip the bustle of Downtown or East Sixth. In many ways, Royal Jelly – the pocket-sized bar/eatery from hospitality vet Dominic Mauro and former Swift's Attic chef Matthew Walker – fits that mold. It has reasonably priced beer and wine lists, a snackable food menu, picnic tables out front, and water for the dogs. It feels like a neighborhood haunt, but maybe this neighborhood is a little weird. The interior certainly belies most expectations of what a restaurant should look like. The dining room is dominated by a mural of Frank Frazetta's Dream Flight, the cover of an L. Ron Hubbard-helmed sci-fi story compilation. The restrooms are plastered in black light posters, and textured grape wallpaper wraps most of the surface. An Eighties teenage hesher interested in both Dungeons & Dragons and the Memphis Group might have come up with something similar. It's a little scrappy, a little divey, but the slightly psychedelic saturation feels fresh in a town that is currently bleached wheat. More importantly, it feels Austin in a way that is homegrown instead of studied. 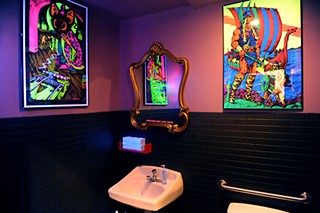 But I do wonder if the tiny dining room would be better served by some slight tweaks in seating. There are a couple of tall community tables and a bar with six or so upholstered stools, but half of the room is dedicated to pseudo-Victorian settees that are comfortable – more so for canoodling than dining with colleagues – but oversized. There's an identity crisis there. The low coffee table is great for a bar setting, but not great for a restaurant setting, and Royal Jelly tries to navigate both. True, bars like the Yellow Jacket Social Club have made kitchens an integral part of their operations, but sandwiches and ready-to-plate dishes like charcuterie dominate those menus. Royal Jelly has higher aspirations.

There's no doubt that this is a beer place, even though it does have a small wine list and a full bar coming soon (there is a handful of wine-based cocktails on the menu like the surprisingly dry cherry fizz made with balsamic and the spicy ginger-basil lemonade made with Eastciders – both $7). Walker isn't just offering up food that will slightly temper a buzz. Most pubs may have tried-and-true formulas, but Walker is on at least the second iteration of his menu, having abandoned all but a few dishes from the opening menu. The concept remains the same: small plates influenced by world cuisine. Adventurous, but accessible. That has been done before, of course, but here the globe-trotting street food isn't just chasing novelty. It just happens to be food that works well with booze. Hearty goat meatballs ($8) are served with creamy fried polenta squares and a punchy arrabbiata. A Cubano sandwich ($9.50), made with sliced bread instead of the traditional baguette, counters the fat of pork belly with a nutty brown butter and a mustard bracing enough to stand up to hops. Brine figures heavily – in the pickled mushrooms used with Chinese-style beef short ribs ($9) and the pickled peppers used with the Thai lettuce wraps ($8.50).

Royal especially excels with meaty dishes, like a delicious grilled Brazilian chicken heart ($8) whose iron only anchors a sprightly chimichurri and fried bread, but the vegetarian options deserve more attention. A dish like the hybrid avocado hummus ($5) does its work as a crowd-pleaser (even with house-made chips that could have used a good blotting), but using vegan sausage as the substitute in the barbecue pork buns ($9) works against the food. The actual buns were moist and dense, and the pickles and sriracha mayo gave nice spice, but surely fried tofu would have been a more pleasant base than an engineered protein. And it's not as if the kitchen is clueless when it comes to vegetarian snacks. The plantain chips served with the Cubano are evidence enough of that.

That's easily corrected, and there are plenty of places in Austin that survive without giving a second thought to specialty diets besides. But all the small quibbles of someone who eats out far too frequently – the seating, the limited draft list, the less-finessed plating – are all just that. Otherwise, they are offering big flavor and an unassuming ambience in a neighborhood that desperately needs more of both. Weird or not, Royal Jelly just has to be the place it wants to be. And they are doing that pretty damn well.