How foraging is changing the local food system 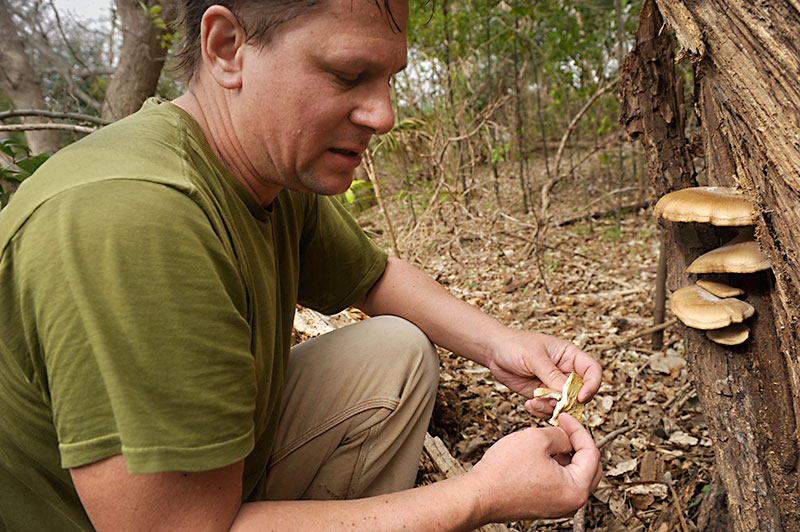 You might not notice, but purslane weed and wild persimmons, feral mulberries and loquats dot Austin's parking lots, backyards, and football fields. Even if you do see them, you probably opt out of nabbing these goodies because of heavy traffic or doubts about who owns the land. But a select few people do know where to find forageable foods, and an even smaller group manages to get them from ground to restaurant legally. With the city's chefs obsessively seeking local and sustainable ingredients for their cuisine, the Austin foragers have been essential to local food systems.

For some, foraging is a make-or-break profession honed through years of schooling and experience. As forager Jason Cortlund explained, certain fungi – and not just the famously expensive truffles – used to bring hundreds of dollars per individual mushroom, thus lending collectors' nomadic habits some Gold Rush-style credence. Just a few years ago, food writer Langdon Cook wrote in his overview The Mushroom Hunters, a bustle of activity seemed like it was bringing "ancient arts" back into the realm of urban food service, with personal foragers on restaurant staffs and a national boom in commercial harvesting.

Foraging in our part of the country has not reached the peaks it has in the New York area or the Pacific Northwest. In most cases, even the experts work in food service to support themselves, either as cooks or restaurant owners, with short bursts of foraging success in the bountiful springtime. Mushrooms are undoubtedly the most popular focus of those hunters' interests. The Texas Wild Mushrooming Group, a local Meetup, has 819 members. Get-together topics range from identifying edible mushrooms to learning to grow personal oyster mushroom crops and how to cook wild-hunted chanterelles – appealing to both "mycologists with a Ph.D." or "interested soccer moms."

But mushrooms are only one facet of the local foraging culture. Some industrious Austinites are earning income by providing uncommon plants to the city's top restaurants. Cortlund, who with his partner, Julia Halperin, co-directed the mushroom-hunter drama Now, Forager in 2012, has been picking and gleaning in Austin for more than a decade. Cortlund points out that professional foraging is a challenge here "partly because of the irregular weather patterns and partly because of the laws." Texas law prohibits harvesting any plant material (or fungus, for that matter) from property you do not own, so any good edibles must be taken from private land. As such, Cortlund says, Austin's foragers need to be ready to drop their basket as soon as they hear, "Get the hell off my lawn!"

Risk or not, the desire for sustainability in a drought-ridden climate is a strong driver for forager culture locally. Edible weeds like purslane and wild onions grow plentifully in hot weather. Olamaie, Hillside Farmacy, and Eden East all rely on seasonal contributions from pickers and foragers, tailoring their menus to what's available. Foraging has even translated to a career for Valerie Broussard, a consultant who has pushed several regional restaurants into "greener" pastures through connections to local producers.

After relocating to the city in 2008, Broussard has become one of Austin's most prominent advocates for community-sourced food, and she too relies on foragers' expertise. There are active community farmers who grow and distribute their produce intentionally, of course, but certain retailers' requests – feral plants like thistle and loquat – are difficult to grow on that scale. And some plants are unlikely to be found in Central Texas. Like Cortlund, Broussard cites unwieldy climates, saying, "there are some things that can be real long shots, and there are [others] that are plentiful," like purslane, oyster mushrooms, or morels, which just had a boom harvest.

For Broussard, the key to acquiring such foods in and around town is to know the few people in the area who have studied, and can safely identify, what's edible. Since foraging in the city is niche, practitioners may just be able to scrape by if their knowledge applies equally to mushrooms found in the Hill Country or mustang grapes on nearby farmland. Cortlund says a forager in Austin has to "kind of learn the landscape. It's part of living in a place – you just learn what's there."