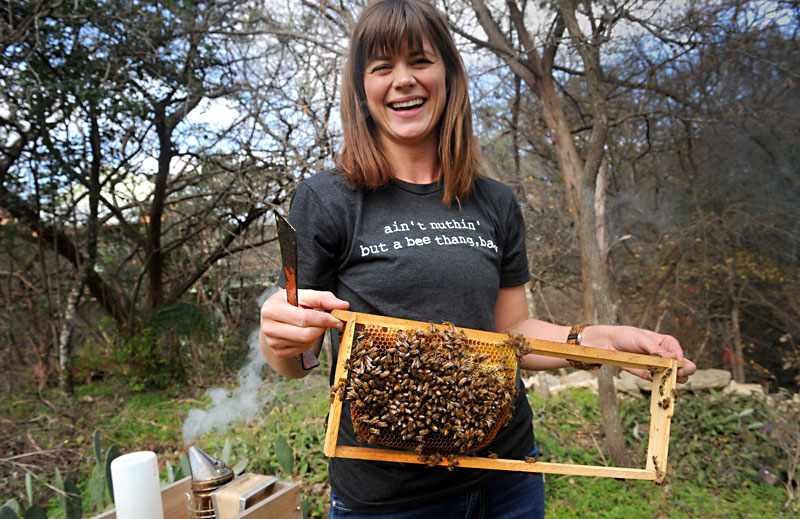 It may have started with just two hives, but in less than a year, Tara Chapman went from owning a small honey business to a thriving swarm. Her company, Two Hives Honey, now wrangles neighborhood micro-apiaries managed by unlikely beekeepers. With some help from a 2015 Austin Food & Wine Alliance grant, their mission is to make solitary bees a household name.

Born and raised in a tiny West Texas town, Chapman spent a decade in Washington, D.C., working in government intelligence, traveling in and out of the Middle East. As an escape from day job rigmarole, while splitting time in Austin, Chapman took a Round Rock Honey beekeeping class and borrowed power tools to build her own hives with a friend. When her first spring harvest was a completely different color and flavor from the fall's, her dream of micro-apiaries took flight. "I thought," Chapman says, "'Every neighborhood in Austin should have its own honey.'"

Chapman explains her very local approach: "Bees will forage three to five miles, so when I have a hive in one backyard, everyone benefits from these bees that are kept in a natural, more sustainable way." Chapman's initial two hives in her neighbor's backyard (she didn't have any property), eventually led to seasonal tours – private and public – all over the city, from East Austin's Farmshare to a North Loop musicians' hostel. In the past, they've included treats from parkside and Olive & June. Talking to tour attendees, she found that even motivated learners couldn't always follow through in building home apiaries alone. "There was a huge opportunity to introduce people – young people, people from all kinds of backgrounds, all over town, people who'd never thought about wanting to keep bees," she says, "I started all these programs for people who want to slowly transition to keeping bees. I want to make it more accessible to more people. I know people who aren't old and white want to learn about bees."

Two Hives' inaugural HoneyHome class starts this spring, designed to encourage potential beekeepers who need some foolproof guidance. Think of it as a tandem jump. For 18 months, Chapman tends the hives on the newbie's property, ensuring a back-up-parachute plan. At the end of the program, the hives belong to the student, a sort of rent-to-own situation. Two Hives is also laying new roads in sustainability, and unlocking the bee universe to interested parties who might face obstacles of time, space, or finance. Chapman premiered new BeeBuilder kits for solitary bees at the Austin Home & Garden Show as a low-commitment alternative for people wanting to attract native pollinators.

"Most people don't realize that honeybees aren't native to the United States, but hundreds of species of solitary bees are," she explains. "They don't live in colonies and they don't produce honey, so they don't talk about 'em because we're super self-serving." Different species use different nesting materials: Mason bees use mud, Leaf Cutter bees use leaves. Some nest in reeds, some in bamboo, so Chapman commissioned a woodworker to build a honeycomb-shaped habitat with a roof. "It's the whole package you need to encourage the bees," Chapman says. "If you hang one of these homes where it gets the morning sun, you can stand out there and watch. It's really cool.

"By promoting urban beekeeping and also promoting the solitary bees that are actually well adapted to our climate," she says, "we actually can do a lot to help. I think it's what's going to move us out of crisis mode back to a more steady reality." Two Hives' honeycomb honey will soon be sold wholesale to TRACE, parkside, and Antonelli's Cheese Shop, and Chapman will also be one of two keepers at the Sustainable Food Center's teaching apiary this spring.

"I find bees incredibly calming and peaceful," she says. "It's like my meditation. When I'm having a really bad day, I like to go sit at the entrance of one of my hives and just watch, or peek under the lid. There's something strangely comforting about it: No matter what stress you have, or what awful things are going on in the world, there are those bees, just working away, doing their thing."