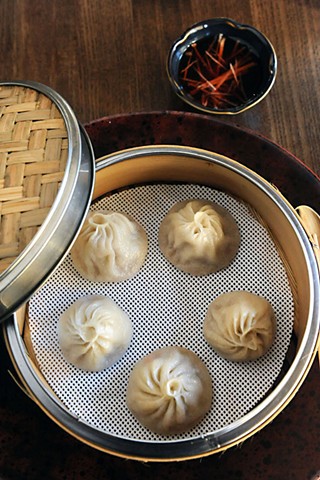 If a hospitality genie granted me three wishes, I would use one of them to eliminate the back row of tables at Wu Chow – the upscale Chinese restaurant from Swift's Attic partners Stuart Thomajan and C.K. Chin. Surely come spring, the hot spot can afford to eliminate six covers in service of a uniformly positive experience. The ignominious line boxes diners between a tall banquette and the glass panes of the IBC Bank lobby. A curtain blocks the light out, creating an effectively theatrical backdrop in the more shallow quadrants of the room, but close up, it feels like little more than a scrim. And the right corner adds the obtrusive traffic of waitstaff scuttling out from the kitchen and service station. If you ever wanted to know how Dave Coulier felt while the press fawned over the Olsen twins, request that table. I can't think of a worse seat in town. 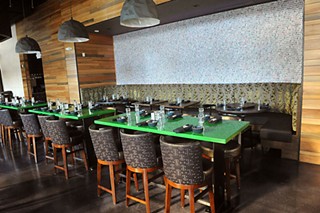 At another place, that might not have merited a second thought. You pay the bill, you grumble amongst friends, and you never return. But I kept thinking of Wu Chow long after that experience. Even after the headlong coursing sent out more plates than could fit on the table, almost knocking over a lit candle onto the aforementioned curtains in the process, I knew I would give it another chance. Even when water glasses were not filled or the specials were explained twice in excruciating detail, I knew I would recommend it to friends. Pleasure leads us to make all sorts of bad decisions. 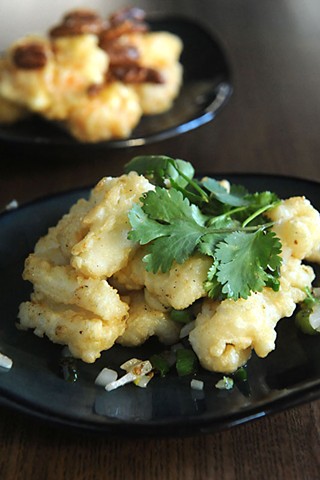 There certainly seems to be some depravity in the vampiric way the Shanghai soup dumplings ($10) are eaten. Contrary to some reports, Wu Chow is not the only place in town doing xiaolongbao, but they are doing them with uncommon finesse (dim sum chef Ling Qi Wu reportedly grows orchids; she obviously has the virtue of patience). Hidden inside is a slightly salty broth, delicate pork, and the perfume of ginger – and maybe some released repression. The yu xiang ("fish-fragrant"– though not containing actual seafood) eggplant ($12) is just as good. The flavor is layered with chile and hints of brine. It may still be unsung, but it is one of Wu Chow's biggest dishes.

But good as those plates may be, the conventional wisdom seems to be that Wu Chow is overpriced, and that's where Austin's lack of diversity rears its ugly head. We are perfectly okay with paying more for elevated Lowcountry shrimp & grits, but it is somehow outrageous to charge more for similarly ingredient-driven homestyle Chinese cooking. Sure, there are several places around town that serve dishes like scallions hugging beef ($16), Sichuan dry-fried green beans ($10), and chicken with celery ($13) for cheaper, but cheaper is what you get. Here everything is saturated and Technicolor. Mapo tofu ($14) is shivery and piquant, salt & pepper squid ($16) seems effortless, and the two-faced noodles (with seafood $25) were almost bouncing in their springiness. Even Jeff Hammett's upper-end tiki drinks (we tried the One Texan's Take on Tiki and the My-Tie, both $14) are about value. Trust me, you don't want to drive to dinner.

I would like to see chef Ji Peng Chen play with tradition to mimic the playful modernity of the dining room (the mahjongg tile wall and the de Gournay-esque koi wallpaper are particularly clever). He did on the honey pecan prawns ($17) – a Texas-fied version of honey walnut shrimp – and the gorgeous squid with chive blossoms ($16), but I suspect the menu will evolve over time. I'll gladly take more classics when they are so perfectly prepared. There are only a very few dishes that don't quite live up to their potential. It's difficult to fault cumin lamb ($17) for living up to its name, but we would have liked a little camphor and sweetness to poke through. Likewise, a few more chiles might have given the gong bao chicken ($15) some more zip. And though the spicy Sichuan pickles ($4) were almost bracing in their freshness, they didn't quite live up to the suggestion of their name. All of that, though, is personal preference.

But the scant dessert menu doesn't give you the option of preference. It's comprised of two dishes from the Chameleon Group's Delish Bakery – assorted macarons and a chocolate matcha cake. The macarons ($3) were as delicious as any in town, but we wonder what would have happened if Callie Speer stuck around long enough to helm a formal dessert program. The end of the meal should not be an afterthought. But I suspect that they already know that.

I suspect they also know the skid row at the back of their gorgeous dining room should be mowed down. Here's hoping it will be when I go for dim sum next week.