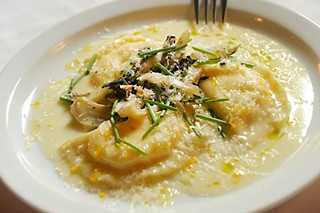 What to do with a place like Al Fico? It's certainly the type of place you want to root for. The latest entry into 2015's Italian steeplechase, Jeff Courington and Kelly Bell's new restaurant skipped the now-customary frenzy when it debuted in late October in favor of a slow settle. Neighborhood concepts are somewhat of a forte for the duo, whose Vino Vino is tailor-made for Hyde Park. Al Fico's East­side address is a little more in flux than Hyde Park, but the discreet signage and enclosed parking lot does its best to not stand out.

Fittingly, chef Clinton Bertrand's menu is unassuming, and beverage director Tom King's wine and cocktail list, though expansive, is surprisingly accessible. But that makes the white tablecloth formality of the dining room an uneasy pairing. It's refreshing at first to see something other than midcentury loucheness in a contemporary Austin dining room, but it would have been nice if they made any concessions to comfort. Save for a handful of booths, the entire room is populated with stiff, ladderback chairs, making it feel more like a commercial banquet hall. It doesn't help that everything is so aggressively matchy – from the off-the-rack sconces and chandeliers to the black-and-white tiled flooring and black-and-white photography. The menu invites you to slouch, but the room scolds you into sitting straight.

That confusion between the experience the restaurant wants you to have and the experience you actually have seems to be a common theme. Reading over the menu, you are promised big-flavor comfort – tomato, lemon, olive – but many of the dishes don't get past the surface. Grilled sardines ($12) should be kept simple, but Al Fico's version served on a wilted bed of arugula only had the accompanying lemon to thank for any discernible character other than fishiness. The mild sweetness of the Castel­vet­ra­no olives and pickled butternut squash in the butter lettuce salad ($10) were pleasing on their own, but muffled by a base spoonful of whipped ricotta. The same happens with the zampone, made from the shank instead of the more traditional trotter. Whatever oomph the sausage filling had, it was lost in the earthy swell of green lentils. Even the seafood zuppa, with preserved lemons and generous chunks of pancetta (and overly chewy octopus), seemed demure.

But blandness isn't as problematic as improperly prepared food. Prawns served on sea urchin butter risotto ($22) had the depth lacking in some of the other dishes, but the rice was a little too granular and the prawns were raw at the head. Al Fico's burrata ($11) had some nice bells and whistles in the gently smoked beets and pistachio pesto – great additions to the cheese's textural and gustatory neutrality. But, as with a well-poached egg, the pleasures of burrata are in the ooze. Unfortunately, Al Fico's version required a little excavation before hitting the cream and curds. Similarly, the smoked mushroom and pecorino al tartufo used in the bruschetta ($9) covered the taste, but the sweaty speck layered on the bread sopped up the crisp.

But there were some bright spots that came with the house-made pasta. Cacio e pepe ($9) could have used a little bit more of both, but the thick tagliatelle was satisfying. Radiatori ($11), tossed in a sumptuous duck ragu, gets a salty punch from pancetta and balance from cubes of butternut squash and fried sage. And the mezzalune ($10), the best dish here, has grilled fennel, ricotta, and an energetic spritz of Meyer lemon. Honeycomb tripe ($8), the only non-pasta highlight, is cooked low and slow and served Roman-style with a bold tomato sauce and breadcrumbs.

The absence of pastry chef Ken­dall Melton, now at Odd Duck, could be felt in the desserts. Melton's desserts have always been more about taste than flash, but it's impossible to imagine her unceremoniously plopping three doughnuts in a cup of chocolate and calling it a day. It's not that the desserts were necessarily bad, but better to risk failure in this market than boredom.

And that's just the rub at Al Fico. Every restaurant has some missteps and every Austin restaurant is suffering from a lack of talented kitchen staff, but this restaurant never really made a compelling argument about potential. And the current market increasingly doesn't allow for slow starts.

A version of this article appeared in print on January 15, 2016 with the headline: Missed Potential