For a while it seemed like it would last forever. Every new restaurant opening was greeted with delighted whoops. It was exciting seeing trailers blossom to full-service dining rooms and hometown heroes pop up in commercial breaks. And the food too was more lively than anything we had experienced before. There were new flavors and preparations, new philosophies and industries. But eventually that all led to hyperventilation. Eventually we would have to pass out.

Maybe the sky isn't falling, but the restaurant failures this year do seem to herald a rocky year to come. It's true that there is still a full slate of new openings on the horizon and there are more than a handful of clear successes from 2015's crop, but the Austin restaurant scene seems far from healthy now. There is too much chatter, too much competition, and too much ennui. There are far too few whoops.

Despite the abruptness, I don't think any of the shutters this year really shocked anyone. Of the latest batch, Congress was always a "mean to" dining spot, laV was plagued by high-profile personnel trouble, and Mettle never spent much time lurking on best-of lists. But what was shocking was that the general reaction to the news was little more than a shrug.

It's easy to blame chefs and restaurateurs for this current malaise. There is, after all, a bewildering amount of sameness afflicting the restaurant scene. But those cookie-cutter spots are not the ones shuttering (yet). What has shuttered in the past year or so are the restaurants that did stick out – Blackbird & Henry with its British inflections, St. Philip with its creative bakery, Pleasant Storage Room with its tropical fantasy, A-OK Chinese with its upscale takeout aspirations. Not all of those restaurants were good, certainly, but they all risked different concepts.

Austin diners may view themselves as cosmopolitan, but we aggressively shun diversity. We traffic in Podunk affectations while demanding authenticity we really know nothing about. When diners refuse to embrace difference, we can't blame the industry for playing it safe. So we'll get more pizza, more burrata, more heaping spoonfuls of Carolina Gold rice.

It's boring as hell, but we are what we eat. 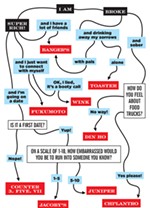