The not-so-hidden pleasures of dine 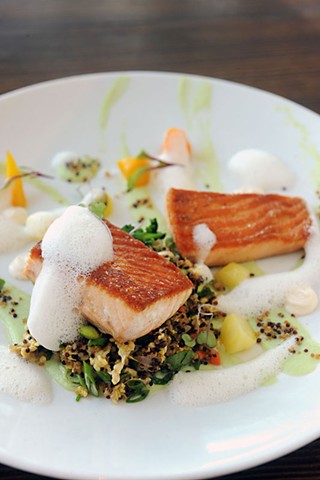 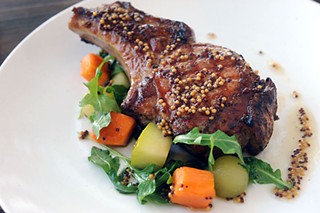 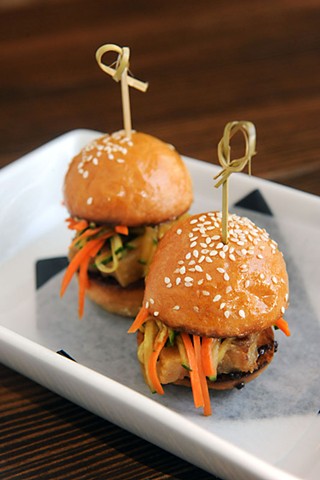 A friend and I were one of three tables in a fine Austin hotel restaurant on a recent Friday night, and I'm loath to understand why. The ground floor space at the recently refurbished Radisson is very attractive, offering one of the city's best views of Lady Bird Lake. The hotel's executive chef, David Garrido, has a well-earned fine-dining reputation based on his years at Jeffrey's and the eponymous Garrido's Downtown. The chef de cuisine, Mario Medina, comes to Austin via the United States Navy's culinary program and jobs working for such culinary heavy-hitters as Hubert Keller, Gordon Ramsay, Michael Mina, and José Andrés in Los Angeles and Las Vegas. Here in Austin, Medina spent time at parkside, chavez, and Barlata before joining Garrido at dine. "I'm more old-school and he's had experience with the new molecular generation, so we balance each other out. We're really enjoying working together," Garrido says of Medina. 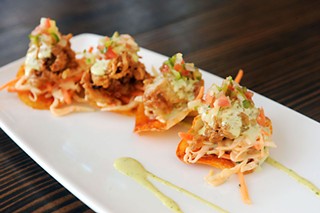 Longtime Austin restaurateur Ron Weiss, Garrido's former boss at Jeffrey's, is in charge of the restaurant's wine program, which continues to offer some interesting Spanish varietals. And according to my dining companion, there are excellent craft cocktails such as the tequila-based Conquistador coming out of the bar. These men of accomplishment have been running a quality restaurant for several months now, and I'm puzzled about why it's still such a well-kept secret. Is it possible Austin foodies still think the Radisson's restaurant of choice is a TGI Fridays? Or have folks just lost track of confusing changes over the past 16 months – Shawn Cirkiel's chavez/not chavez; Josh Watkins/not Josh Watkins; a restaurant called dine or perhaps some other name??? It's enough to confuse anyone. The most recent explanation appears to be that the hotel property is once again for sale, so promoting the in-house restaurant is not their highest priority, but that's no reason for locals to miss out on a perfectly fine eatery.

Perhaps the best way to get acquainted with dine would be the weekday happy hour where there are deals on craft beers and cocktails as well as all sorts of snacks and shareable small plates for half-priced grazing. Garrido's signature crispy oysters on yucca root chips ($4.50) are here, and there are some little salmon ceviche tacos ($4.50) that offer great contrasts in flavors and textures. Try some piparras peppers wrapped in whisper-thin strips of serrano ham ($1.50), or pork belly sliders ($4) with crunchy slaw, or Linguica sausage ($4) paired with beer mustard and house sauerkraut with focaccia toasts.

Fall flavors are well-represented by a bowl of pumpkin risotto garnished with tangy sweety drop peppers and plenty of grated Parmesan. We found both the salmon ($22) and the pan-seared scallops ($26) to have perfectly seared exterior crusts on buttery, melting interiors. The salmon sits on a bed of quinoa and crab "fried rice" with edamame and carrots, while the scallops are paired with stir-fried vegetables, jasmine rice, and a bright green curry. And if I hadn't gone to investigate dine, my new favorite lemon dessert would have gone undiscovered. The cleverly deconstructed lemon meringue pie ($6) serves up spheres of lemon curd, an oval scoop of fresh lemon verbena ice cream, and shards of crisp meringue "crust." For lemon lovers, it's divine. 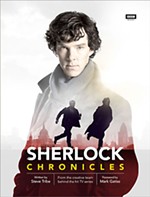 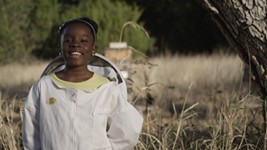