The cost of Austin fine dining 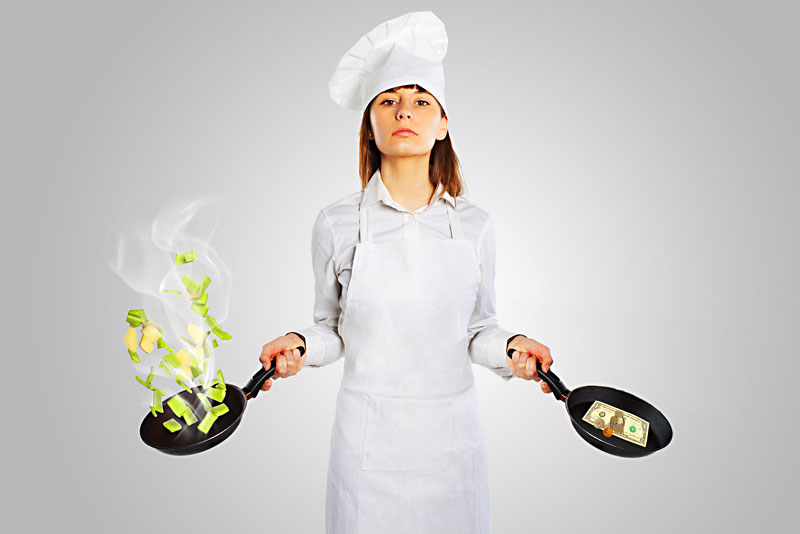 In November, fast-food workers across the country went on strike to demand a living wage from employers. Austin activists joined in with the movement protesting the low wages routinely offered at chains like Taco Bell, McDonald's, and Burger King. But while wage inequity in the fast-food industry has hit national news, the same issue in fine dining has largely gone unnoticed.

What most people don't know is that in upscale restaurants, starting pay for trained chefs can be as low as minimum wage (currently $7.25/hr.). Some restaurant owners eliminate wages altogether in favor of shift pay to avoid paying their staff overtime – paying kitchen staff a fixed amount per shift. The amount paid per shift, which often surpasses eight hours, rarely exceeds what an employee would be paid had they simply received overtime wages. The practice is illegal, but according to several insiders interviewed for this article, it still happens frequently in Austin. According to one chef (like most interviewed, he wished to remain anonymous), "the more notable the restaurant, the less they pay" – that is, if they pay at all.

Many kitchens, particularly the most prestigious establishments, get free labor from taking on stagières. The common practice asks budding chefs to work for free in order to gain direct experience and make professional connections with well-known chefs. A stage can last anywhere from a day to upwards of a month. For some, especially those who cannot afford the prohibitive cost of culinary school, it is the only way to break into the business. Jessica Maher, pastry chef/owner of Lenoir, said that she worked as a stage for many months, while waiting tables at night, in order to learn her craft.

Wages are just one part of the equation. Health insurance at most restaurants is generally not offered, and in cases where establishments are large enough to be required by law to offer health insurance to their employees, they find creative ways to avoid it, like keeping kitchen staff hours to less than a full-time equivalent, which is 30 hours per week. "The health care act is really screwing our industry," said one food professional I talked to, who declined to be named. This is because employers now work hard to keep their full-time staff under the threshold of 50 full-time employees, for which employers are required to offer insurance. Retirement? Forget about it.

It makes you wonder why people choose cooking as a career at all. "Cooking is a passion profession," said one sous chef. People do it because they love the food, the rock-star glamour of the industry, and the fast-paced work environment. However, many people can only take the brutally long hours, pittance pay, and emotional and physical abuse for so long. Chef turnover is so chronic, you could set your watch by it. From an owner's perspective, this makes it difficult to maintain consistency, quality, and cost, three very important factors to a restaurant's success.

In an August forum post on Eater, a question was asked about the chef shortage in Austin. The only response was from a line cook who wrote that "Austin is one of the worst cities for chefs and line cooks. Wages in general have hardly gone up in the past 5 years. Meanwhile, rent has skyrocketed to the point where I hardly know any line cooks who do not have problems finding a place to live here." I heard the same sentiment from virtually everyone I interviewed.

Elsewhere, pay equity in the hospitality industry has been getting some attention. Danny Meyer, the legendary restaurateur at the helm of New York's Union Square Hospitality Group, recently announced that he would be phasing out tipping, and raising prices at his fine dining restaurants by 20%. This will allow Meyer, according to the New York Times reporting, to pay back-of-the-house staff more equitably. Meyer commented that he wanted to move away from tipping and raise wages primarily to attract talented staff to work in his kitchens. Currently the average kitchen wage paid at his restaurants in New York City is $11.75 per hour. Following the price increase, average kitchen wages would rise to $15.25 an hour. Certainly, his concern for more pay equity in his fine-dining establishments is notable, and an issue that too few restaurant owners seem willing to openly address. On the other hand, cynics have questioned why Meyer, whose net worth is estimated to be close to $400 million, can't just pay his struggling staff more.

But not every fine-dining restaurant owner is getting rich in this business. Maher and her chef husband, Todd Duplechan, have a reputation for being one of the fairer employers in the Austin scene. The couple pays their kitchen staff $10-13 an hour, as well as overtime for more than 40 hours per week. Their employees receive three weeks of paid leave a year, and earn cash bonuses. And while they can't afford to offer health insurance, they do pay for their employees' wellness and general sick visits to concierge doctors. "We have this conversation [about better pay] all the time, and we want to be able to pay staff better," says Maher. But she points out that their waiters probably make more than they do every year. "Every extra dollar we make goes back into the business to pay for repairs and upgrades," she says. In fact, Lenoir recently raised their prices to help give their kitchen staff pay raises.

It's all part of the tightrope smaller restaurants walk with customers. In order to pay for talented staff, restaurants have to charge more for their product. But how much is too much before restaurants price themselves out of the consumer base they need to attract to stay in business? From a consumer standpoint, it's hard not to ask where that $70 price tag for a steak is going, and why some restaurants would need to charge more to pay their staff better.

A formal culinary education takes one or two years to complete and can cost $40,000-80,000, the equivalent to many professional educational programs. Yet unlike a law degree, or a professional master's degree, where students start at $50,000 or more a year after graduation, pay expectations for entry-level chefs are generally about $8.50 to $10 per hour in Austin. $12 an hour for a line cook is considered high, and $13-14 per hour is practically unheard of. The Texas Workforce Commission reports average wages for cooks in Austin between $10.64 and $11 per hour, depending on the actual job classification. This is only slightly better than the statewide average that includes all rural areas. Sous chef wages (a position that usually requires about 5-7 years' experience), fall out at $16.25-18.16 per hour, or $33,880-37,770 annually. Health care, vacation, sick leave, and a 401k are not typically included in any compensation package until an employee makes it to that level. Average wages for a chef de cuisine, a position which can take someone 10 or more years to reach, hover between 40k and 60k a year. Wages at the chef and sous chef level in Austin are significantly lower than the statewide average.

So let's do the math: Someone graduating from cooking school with say, $60,000 worth of debt financed at 4.29% could be facing student loan repayments of $327 per month for the next 25 years, or $616 per month for 10 years. This is on a starting take-home pay of about $1,600 per month, in a city where rents for a one-bedroom apartment start at $700 per month. It is just not sustainable.

And in fact, many people do drop out of cooking altogether after they see how hard it can be to keep afloat in the industry. Currently, there is an incredible chef shortage in Austin. "I just hired my first cook a few days ago, and we've been open two months now," says Matt Walker, a chef with 12 years' experience and owner of Royal Jelly. This is partially because he was trying to save on labor expenses, but mainly attributable to difficulty in finding qualified chefs to even apply. Although he did not provide an exact number, Walker indicated that he is paying his new assistant somewhere in the $11 per hour range.

Currently there are more open positions in Austin than qualified chefs to fill them. Recruiting from outside the city is challenging as long as wages remain flat. But the issue of fair wages is not just about fixing the chef shortage here. There is an ethical dimension that restaurant owners and diners alike need to understand. When we spend $250 on a meal for two, is it fair that the skilled craftspeople who prepare it can barely make ends meet? "It is a touchy conversation," admits Maher. But perhaps it is one that our community should start.