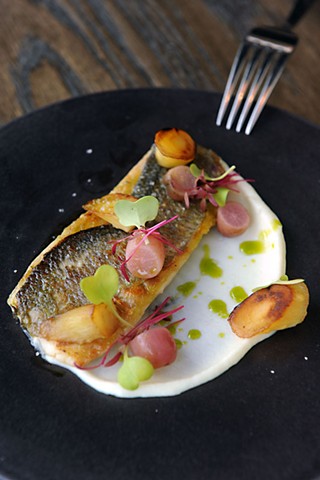 Value in food is a curious thing. Uchi long ago trained Austin to spend major bucks for a variety of exquisitely prepared small plates, but go outside of the Japanese template and you are likely to elicit howls from churlish customers who topped their $150 meal with a stop at Taco Bell. Make those small plates Italian and the chorus grows louder. Of course, it is frustrating to overspend at a restaurant, but we are missing something if the existence of restaurants hinges only on their ability to leave diners stuffed. Satiation is not satisfaction. I say this because the Internet is already grumbling about the perceived value of Juniper, the contemporary Northern Italian restaurant from chef and former Uchi creative director Nicholas Yanes. It may be true that an average meal here will not have you waddling out the door, but it perplexes me as to why that would be the goal. Most of us are able to enjoy a cocktail without the final goal of inebriation. It's a shame that so many people insist on getting wasted on food. 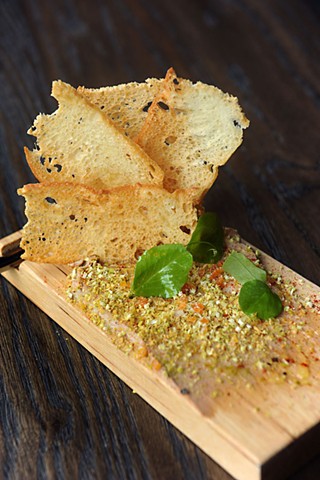 Sure, some of Juniper's morsels stretch the common definition of "plates." (With perhaps unintended humor, the menu simply lists everything edible in the same deadpan column.) But even in miniature, there is a surfeit of care and composition. Oysters are topped with a tomato-seed suspension and an energetic white balsamic froth or roasted orange, amaro, and fennel fronds. Chicken liver mousse ($7) is smeared unceremoniously on a plank and given a shatter of candied grapefruit and crushed pistachio. The cannelini uses grapefruit too, here fresh and tart-bitter against the neutrality of the beans. And then there are the puffy potatoes ($6). The tater tot-shaped bites are crisped on the outside and barely more than a flutter on the inside. The taste is still at the top of my memory. How's that for value? Besides, dining at higher price points should be about experience. Juniper's sleek aesthetic by designer Mark Cravotta and architect Chris Sanders sets the scene better than most. The seating is midcentury-inspired wicker with upholstered pieces in ice green and a large lapis velvet banquette. The dining room is dominated by a huge etched juniper tree on the near wall and oversized papier mâché fixtures. There are some nods to Italy in spirit, but it's far from being a theme park.

The cocktails and desserts play with that heritage as well. Nic Vascocu's beverage program skips making another negroni, but there is definitely gin and definitely tons of bitters. No Romance for Me pairs Campari with Dolin blanc vermouth, ginger, and lime ($11) while Chester Copperpot ($11) hooks Averna, China China, and more aromatics with rye. Pastry chef Kerstin Bellah's desserts riff on traditional desserts like panna cotta and cannolis.

That's a clever mirror of the savory menu. The initial story focused on regionality, but Juniper in practice uses their Italianness as a springboard. The menu has plenty of pasta, dustings of Parmesan, and a solid ragu, but it doesn't really fit comfortably amongst 2015's crop of more traditional-leaning eateries. I would (begrudgingly) call it New American, but Yanes never throws in yuzu just because he can. The Central Texas-meets-Northern Italy hook gives the ingredients and techniques focus without being myopically focused on false notions of authenticity.

So there is pappardelle ($14), as luxurious as any you are likely to find locally, and that pappardelle is topped with a thick oxtail ragu. But then the kitchen amps things up with horseradish, not really enough to give the dish sting. And there's a twirl of thin pasta ($14) laying in a Parmesan-rind brodo and topped with chives. You can add Alba truffle for $20 or Osetra caviar for $10, but it excels in its simplest form. There's orecchiette ($11), simply prepared with pecorino and broccoli and a haystack of surprisingly delicate pork ear. All are antidotes to the parade of mediocre pastas churned out this year.

The same Italian-ish narrative runs through the proteins. Small cubes of seared rib eye ($17) are served with a "chunky chimichurri" of green olives and parsley leaves that was more of a misnomer than a deconstruction. But whatever one wants to call it, it added sprightliness to the beef. Meyer lemon brightens both a sunchoke dish with stone crab ($12) and king trumpet mushrooms ($11). Pernod reinforces fennel's anise in the arctic char ($16). Beets, calmed from the fever pitch of a few years ago, have renewed vigor in a risotto ($12) with hen-of-the-woods mushrooms and a dollop of mascarpone. The ingredients in those dishes range from North America to France, but it all feels like something you would eat in Northern Italy today.

Whether I leave feeling stuffed or not, that's also what I want to be eating in Austin.