Maybe it's the imprint of a school reward system set since elementary, but I fixate on pizza more than any other food. Until recently, my Facebook cover photo featured a print of gooey pepperoni pies. My equally food-obsessed best friend and I plan to get friendship tattoos of a slice – wearing sunglasses and riding a skateboard – forever saying that we really like dining together. A now-deleted Scruff profile simply said "I am the mayor of pizza," as if that is the only thing you needed to know before you asked me out on a date. The truth is, it well might be. If you can rhapsodize about pizza, you already agree with two-thirds of my value system. 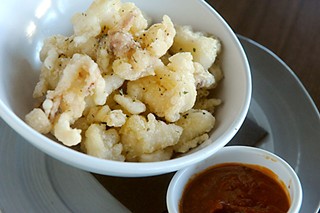 But as much as I still am in eternal wonderment about the magic of dough hitting oven, I still have to question the utility of Austin's current generation of pizzerias. Our local pantheon largely came about from the need for regional excellence – Home Slice zeroed in on New York, Via 313 on Detroit – but now our stylistic bases are covered. Maybe pizza doesn't need to justify its existence, but in the throng it helps to have some sort of hook. Rebel Pizza Bar, the project from food veterans Frank and Nina Seely and Austin local legend Suzi Yi that now occupies the space above Yi's namesake eatery, is staking claim in an underserved but increasingly populated slice of North Austin. Business acumen isn't really all that rebellious, but I'll give them a pass, if only for completely ignoring the look of the increasingly homogenous local scene.

Rebel does genuinely buck the trends in its stylistic choices, the most prominent of which is the graffiti curated by Justen Foss. Although it seems he gave them a basic color palette, it's clear that Foss let each of the artists do their own thing – from psychedelia to DONDI-esque wildstyle to Sharpie doodles that wouldn't have looked out of place in An American in Paris. The dining room feels a little Eighties, the tone set by the neon cursive of the logo (perhaps self-consciously so – the appetizer portion of the menu is subheaded "Wanna Be Startin' Somethin'." It may not be the sort of place that will impress a first date (unless they really love bocce ball), but at least it isn't another Austin dining room using reclaimed wood and exposed bulbs. Rebel shrugs off the unwritten rule that every new eatery must have some aspiration of being upscale. Just look at the menu names. Puns aren't generally regarded as haute.

Still, despite the silliness of the names, it's obvious from the starters that Rebel was going for something a little more considered than what you would find in a workaday parlor. The Seelys entrusted their son, chef Alex Kahn, who made his name locally at NoRTH and the now-closed Trento, to develop a menu that attempts to refine the sort of comfort staples you will find at pizza and Italian eateries across town. At peak form, dishes like Octopus's Garden (fried calamari sprinkled with herbs and served with a spicy marinara – $11) and Notorious X.X.L. (an oversized meatball served with more of the marinara and ricotta – $11) are just the kind of thing you want to eat while downing beer. The calamari was greaseless and seasoned throughout, and the X.X.L. releases the same dopamine as mom's meatloaf.

But something happened between my first visit and the last. When the kitchen is not on their game, the calamari is rubbery and comes with only a surface dusting of salt, and the meatball, while still tasty, comes out cold. The theme continued with the Heartbreaker (fried artichoke hearts served with remoulade and a vinaigrette – $7) and Not Knots (foldover squares filled with sun-dried tomato, pepperoni, or sausage – $5-11). On one visit, the unbreaded hearts crumbled like puff pastry and the addictive knots nearly spoiled our supper. On a repeat visit, the hearts seemed plasticized and the knots were dull meteorites. I suspect this has something to do with Austin's great talent drought, but it's a shame to see good basics executed so carelessly. At least the wings ($7-11), not paying any mind to mildness, were enjoyable twice.

The Jekyll & Hyde kitchen was even more worrying when it came to the pizza itself. The first visit produced plenty to recommend in a trio of composed pies. The Goldenpye ($13-19) uses caramelized onion, sausage, egg, well-crisped string potato, and goat cheese with a woodsy rosemary undertone. The Athena ($13-19), topped with the accoutrement of a classic Greek salad, is a rare example of a pizza that feels light. The Pig & Fig ($15-21), with titular jam, prosciutto, red onion, and arugula, balances a pantry of assertive ingredients. The crust on all three was uniformly crispy.

That's not something they were able to duplicate a couple of weeks later, where again my party ordered three pies. This time the Pig & Fig was excessively sweet. And the Queenie (their version of the margherita – $11-15) and the Contender (their meat lover's with sausage, pancetta, pepperoni, and prosciutto – $15-21) were both basic. That evening, they were not able to duplicate crust texture off three pies presumably fired in close proximity. One had the nice crisp from the first visit, another had an agreeable chew, and the third was somewhere between a marshmallow and the pillow you never replaced through undergrad. Confounding.

But that went on and on. On one visit the service was superb. On the other, subpar. The drinks like the Bourbon Slush ($9) and mezcal-based Underground ($12) were excellent on one trip. On the last visit, my dining companion's Pepino Sucio ($9) tasted so strongly of gin that she immediately replaced it with a beer. The server whisked it away without caring what was wrong. It does not bode well that he was also a trainer.

But still, Rebel retains most of its initial charm. I suspect that is because it was planned by people who care about their community. To keep thriving they need to make sure each meal is as good as the last. Going against the grain is a fine notion, but you can't rebel against everything.