We are just going to go ahead and admit it. When we first came up with the idea for a breakfast taco tournament, we were slightly dissuaded by all the research we would have to do. For months, we had to live and breathe breakfast tacos. We eschewed omelets and pancakes and poached eggs on pork belly and sometimes carnitas and barbacoa in favor of more eggs, more chorizo, and more cheese. We would sometimes wake up in a fright, mistaking our comforter for a flour tortilla and our pillow for bacon (for the record, it's not nearly as delicious). On two occasions, we wandered into strangers' homes thinking we had found a breakfast taco holy grail. It was tough, often grueling work, but we survived long enough to come up with 15 competitors (with the help of a tireless taco crew). You, the tacotariat, chose the 16th slot through vigorous debate on social media, and helped further our taco study. Now it is time for the real work to begin. Over the next two weeks, we will pit the best vs. the best. In the end, only one breakfast taco master will remain in the game. Voting for the first eight brackets is open now. Taco purveyors, may the odds be forever in your queso. – Brandon Watson 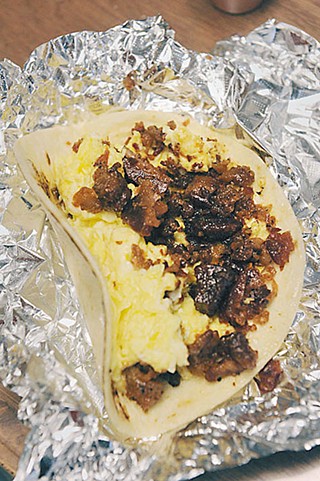 
Just look at the clay brown building with white block letters painted on the side. Marcelino Pan y Vino is no-nonsense. There's no newfangled ingredients here, and you can't get a cortado, but the basics are done so well they defy trendiness. Spiced potatoes are cooked in long slivers like fries for maximum potatofication. The bacon has just the right amount of crisp. And the flour tortillas practically melt in the mouth. No wonder Marcelino made their Twitter handle @BestTacosAround. 
Steak and eggs with rajas and charred onions. Migas with avocado, queso fresco, and cilantro. It's hard to believe that you can order such things through a window that also sends you black and whites (half horchata, half cold brew, all awesome). But through a breakthrough in tacollurgy, we are now entering an enlightened age. And to think, some presidential candidates don't believe in science. 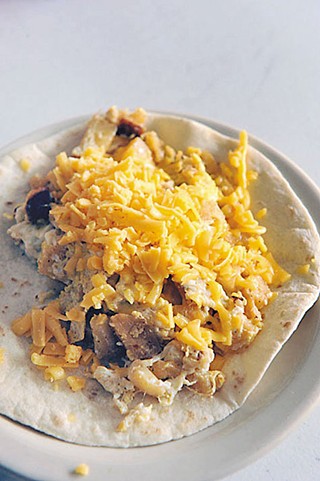 Juan in a Million


It seems somewhat of a misnomer to call the Don Juan a mere breakfast taco. The huge potato, egg, bacon, and cheese namesake of owner Juan Meza is a legend, a raison d'être, maybe even a whole universe in a tortilla. Rumor has it that William Kidd buried his treasure in a Don Juan, and that Bette Midler was thinking of it when she sang "Wind Beneath My Wings." If all that sounds hyperbolic, well, maybe you just haven't ordered one. 
Few restaurants can claim to be bona fide classics, but then again, few restaurants are as beloved as the bakery founded by Joe Avila. Founded more than 50 years ago, Joe's is one of the restaurants that made the breakfast taco the only way to wake up. It's true that Austin does not look anything like it did in the Sixties, but anywhere they serve Joe's migas con todo (or that addictive breaded bacon) is home. 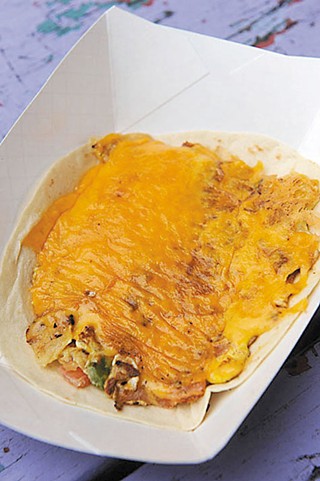 
Whoever printed those "78704 – it's not just a ZIP code; it's a way of life" bumper stickers was probably thinking of the busy jumble of murals, memorabilia, and music that makes up Maria Corbalan's South Austin eatery. But no matter how much eye candy is on the walls and ceiling, it can't distract from great build-your-own breakfast tacos and a nationally recognized migas. 
The last time we ate at Mi Madre's, a seemingly random assemblage of people suddenly started playing Mexican folk songs on the patio tucked between the two dining rooms. It was a gray day, but the yellow wall cast a glow and our order of two #1 tacos (sausage, egg, potato, cheese) and two #13s (smoked bacon and eggs) had just arrived. Sometimes you forget that magic can still happen in Austin, casual get-togethers that turn into memories. And sometimes you forget that breakfast tacos can happen at brunch. 
On a pleasant Austin Saturday morning, order one of Paco's deliciously engineered corn/flour tortillas stuffed with egg, mushroom, peppers, and spinach, and sit outside with a mimosa and a Topo. Remember that great South Austin house party you got invited to when you first moved here? You'll have the munchies when you eat here too. 
True story: We once tried to express our feelings about Papalote in song to the tune of Los del Río's seminal classic "Macarena." As a musical expression, it was a dismal failure. As an expression of love, it could bring you to tears. While it is exceedingly difficult to rhyme avocado, poblano, calabaza, and chicharrón, put all that in a tortilla with some scrambled eggs and then tell us that you don't hear music, too. 
If you have been to a locally owned coffee house, chances are you have picked up a Tacodeli breakfast taco. But nothing beats having them freshly made. If you are a traditionalist, feel free to build your own potato, egg, and cheese; but we suggest you branch out a little to one of their specialty tacos. The Vaquero is full of grilled corn and roasted poblano and red peppers. The Otto is a filling mix of black beans, bacon, avocado, and Jack cheese. And a migas taco is about as Austin as you're likely to get. 
What does it take to become a breakfast taco legend? In Taco-Mex's case, all you need is a window. Their no-frills approach to the taco experience means that they never sacrifice quality in order to achieve their famously low price. Sure, you don't get a dining room with lushly upholstered banquettes, but order online and you can take papas guisadas back to your bed. It's really the only reason that we remain single. 
We have always liked to think of El Tacorrido's trio of salsas as the Destiny's Child (later edition, sorry Farrah) of breakfast taco toppings. Verde de aguacate is the Michelle, velvety but assertive enough to stand up to jamón. Roja is the Kelly, a little classic, but perfect with other background players like huevos or papas. Fiery and roasted, molcajete is the Beyoncé, belting out even over spicy chorizo. Girl, I didn't know you could get down like that. 
The breakfast tacos here are simple: chorizo and egg, potato and egg, cactus and egg. But that's just a start. Before your order is ready, you will want to make a beeline to the salsa bar where paper-thin radishes, pickled onions, grilled jalapeños, avocado salsa, cucumbers, green and red hot sauce, and limes are ready to be filled in giant cups. They didn't have to go through all that trouble – the tacos stand up on their own – but we don't mind them going for extra credit. 
Brisket on breakfast tacos. We repeat: Brisket. On. Breakfast. Tacos. It's not enough that the flour tortillas at Valentina's are handmade or that the humongous Real Deal Holyfield's combination of fried egg, potatoes, refried beans, and bacon will keep you full for a full day of rowing on Lady Bird Lake or sending press releases from a MacBook Air. They put brisket on breakfast tacos. It's everything Austinites hold near and dear. 
While other places' breakfast tacos are lauded for toppings or tortillas, the Veracruz trucks have built a cult for their eggs. Creamy but not runny, firm but not rubbery, the eggs will make you momentarily forget about kitten GIFs. Even without the yolks, the eggs are somehow just as rich. We are not sure if founder Reyna Vazquez meant for the Reyna (egg whites and a garden of vegetables) to be a play on words, but we'll gladly bow down to it any day. 
This one came down to the wire, edging out Taco Joint in the wild card social media vote. But in the end, Torchy's mix of everyday quality and not-so-everyday fillings (brisket, green chiles, jalapeño sausage) won our voters over – or maybe it was the devilishly addictive Diablo sauce. As Cuvée Coffee founder and CEO Mike McKim tweeted, "Can it be a contest without @torchystacos?"