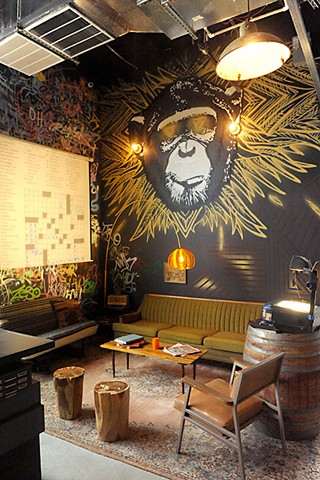 Almost a year ago, she and her husband and partner Aaron Berman relocated to Austin from Denver, Colorado, to expand their business. Back home, they call their method "back-alley wine-making" and today, it's not much different. Currently, this winery and taproom is tucked away at the end of an industrial lot near South Congress that is still under heavy construction.

Meredith recalls how this lot was a hub for "drugs and prostitution" when construction began in February. "It was perfect for us," she explains. "Off kilter" and "gritty" are two adjectives she uses to describe their approach. Their goal was to construct a space that not only makes wine, but also engages with the community. Instead of setting up the tasting room like a tourist attraction, like wineries often do, they welcome neighbors to drop by for wine at any occasion. The taproom consists of a long bar and several stylish seating areas that encourage mingling. Board games and crossword puzzles projected onto the wall invite visitors to relax with friends and lounge a while longer.

Under the guidance of winemaker Ben Parsons, who co-founded the business in 2008, the team crushes, ferments, and ages the wines on-site. "We do everything but grow the grapes," Berman explains. During harvest season, they drive a refrigerated truck out to Texas vineyards such as McPherson Cellars to pick up the grapes. After driving the fruit back, it's all hands on deck.

While the brand-new winery is initially serving from wine kegs they delivered from Colorado, they are aging a range of Texas varietals, from Cabernet Franc to Merlot. The Cinsault Rosé will kick off their Texas-grown debut. In addition to wines, they also offer a dry-hopped pear cider that's crisp and not overly funky.

Eco-consciousness is one of the winery's fundamental values. For one, they deliver their wine in kegs to restaurants to reduce the volume of packaging needed. They not only bottle, but also can their products because they understand that many establishments do not accept glass recycling. Glass is also bulkier and heavier to ship, so it leaves a larger carbon footprint. Practically speaking, canned wines are also more convenient for Austinites' active lifestyles. One can easily take them camping, to the pool, or on the paddleboard.

The winery and taproom is now fully operating and open to the public. They offer private tastings for groups. Check out their website for a list of products and business hours.