For restaurateurs, longevity can sometimes be more of a curse than a blessing. The urge to innovate often erodes after years of juggling grueling schedules, handling customer whims, and making micro-decisions that have very little to do with hospitality. When chavez opened, I was worried that Shawn Cirkiel was phoning it in. I didn't exactly blame him; there are few Austin chefs who have been around longer. He was the second owner of Jean-Luc's Bistro in the early Aughts, then spent some time at Uchi, before redefining local late-night dining with parkside. Along the way, he upped the pizza game with backspace and opened a neighborhood trattoria with Olive & June before briefly dipping his toes into hotel dining. The Southwestern revival fare at chavez seemed lackluster, but his laurels deserved some resting. 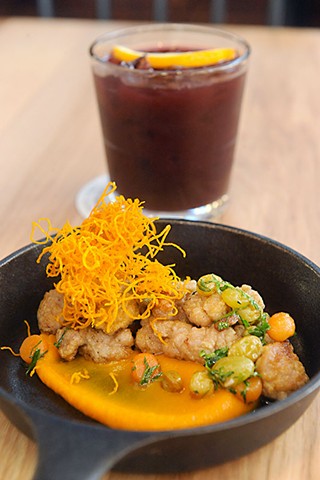 I will never again doubt the restorative power of a nap. Bullfight proves that there is still fire left in Cirkiel's Parkside Projects. The contrast between the two restaurants couldn't be more stark. If chavez's fortress of solitude seemed sterile, Bullfight is more of a bat cave – anchored by heavy rafters and a massive iron chandelier. If chavez's Southwestern redux wasn't ready for an Austin moment, New-Americanized Spanish fits the local id. If the service at chavez was lackluster, then ... well, not all things can change.

It's not that the servers are careless or otherwise disengaged. Professional, gracious, attentive. Throw any plaudit their way and it will probably apply. But servers are not service, and no amount of courtesy makes the headlong sprint of the kitchen any less noticeable. There is barely any time to savor one of executive chef Ryan Shields' offerings before another takes its place. That's too bad, because it causes the tastes to run together. And with so many preparations relying on the grill or the fryer, pacing is everything.

That wasn't much of a problem in the "snacks" column. The presentation is a bit gimmicky – mini Parsons tables intersected with paper cones – but each morsel delivers concentrated flavors that stand up to the punchy cocktail menu. Like a lot of bar menus, the story here is mostly about salt. Battered squid with aïoli ($5 at full price) and ras el hanout-seasoned fried eggplant ($4) had a touch of the stuff; bacalao fritters ($5), sweetish torreznos ($5), bacon-wrapped dates ($6), and especially the jamón croquettes ($6) take the entire lick. All that is welcome next to advanced sommelier Paul Ozbirn's cocktails like the El Torero (rye, apple liqueur, vino rojo, lemon – $10) and the Ahumado (moonshine, mezcal, fig syrup, and citrus – $11) or his daring wine list – both of which dare to just skirt treacle in search of balanced pairings. 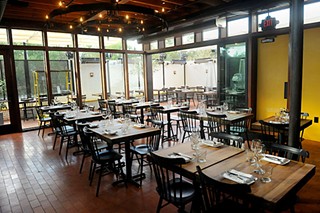 But later in the meal, the balance was off. And a few of the dishes suffered from being delivered so closely together. The pan-fried veal sweetbreads ($8) were a standout from the first visit, but seemed overly sweet when eaten with the orange in duck meatballs ($12) and the glaze in pork ribs ($14). None of these dishes faltered on their own, but they could have benefited from being coursed out with the woodsy escalivada spiked with the vinegar of boquerones ($10) or maybe the smoke of marinated octopus with potatoes ($12).

And there is plenty diversity to be had, particularly with the vegetable dishes. Of the gazpachos, the tomato ($8) hedged closer to tradition, but the creamy cauliflower ($6) with an early fall sprinkle of walnut edged it out. Parsnips ($9) were of the season too, honeyed by blood orange and saffron. The patatas bravas ($5) were a little undercooked and the sauce a little too on the nose, but the roasted mushrooms ($9), already impossibly buttery, wallowed in cured egg. The two tortillas impressed too – the classic one-two of caramelized onion and potato ($5) is a heartier counterpoint to the more ephemeral kale and butternut version ($6).

The kitchen is also especially adept with seafood. Branzino crudo ($12) is enlivened by a classic pipérade and green olive. Serrano ham lent some assertiveness to usually mild hake ($22). The richness of urchin roe ($9) was compounded with butter and the char of grilled bread. Instead of playing up the caramelized sear of diver scallops ($16) with something expected like corn, Bullfight uses hazelnuts in a romesco, then forgets propriety entirely by adding the bite of green onion. The paella isn't purely seafood ($29) of course, but the shellfish stood out even when mixed with a fairly stout chorizo. Like others, I found the socarrat a bit wanting, but I expect that will come with practice.

And I expect they will get plenty of that, especially at the generous happy hour. Sure, there are some wrinkles to iron. The menu could use a few more reprieves from all the smoke and salt, and pastry chef Erica Waksmunski is being criminally underutilized with a scant three desserts. But still it's nice to see Cirkiel in top form. It turns out you can go home again.

A version of this article appeared in print on November 27, 2015 with the headline: The Once and Future King 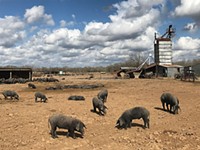