In Austin, carnival food has no season 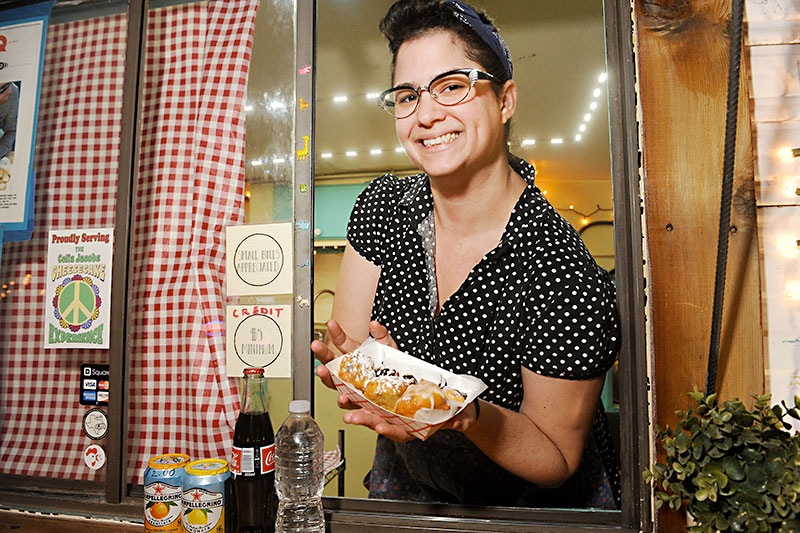 State fairs started as a way to promote agriculture through livestock shows and competitive exhibitions. There's still plenty of that fanfare today, but ask anybody about their memories of the fair and the only chicken they are likely to remember was deep-fried and served with a choice of dipping sauces. Every year, Americans lick their lips in anticipation of the culinary attractions, where the most outlandish recipes are lauded. But in Austin, there's no need to mourn the season's end. These comfort-food-slinging businesses deserve a blue ribbon year-round. 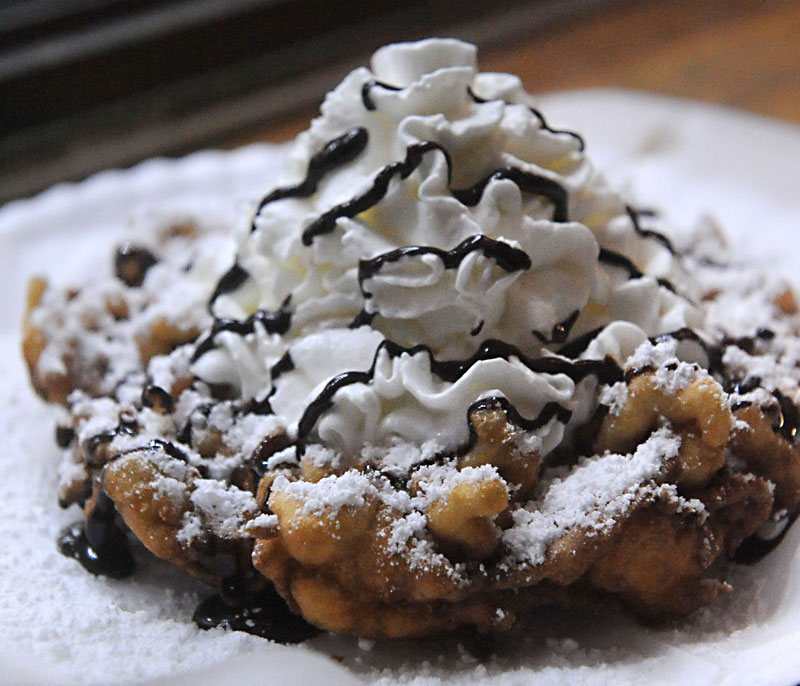 
Perhaps the most dedicated purveyor of quintessential fair food, Fried and True serves it up five days a week with a Fifties flair. Look no further for the gamut of deep-fried foods: grilled cheese, funnel cake, Oreos, pickles, and more. 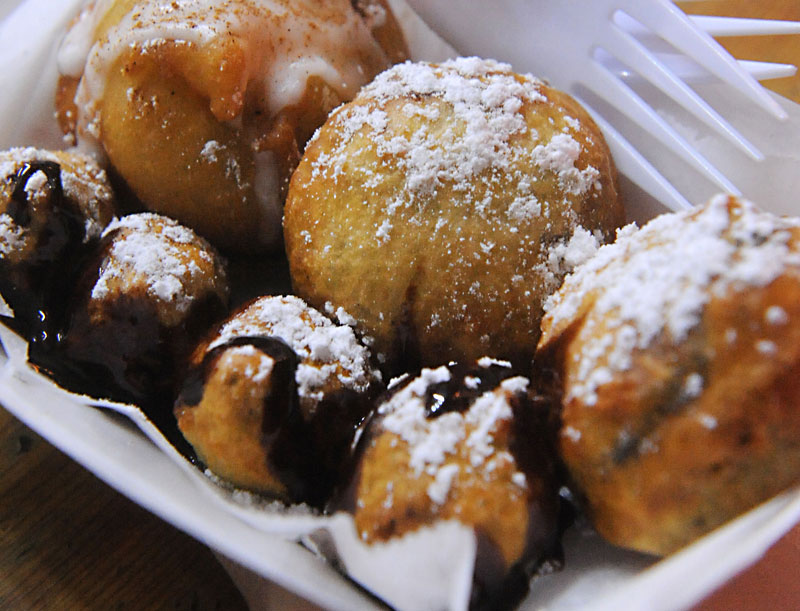 With a bachelor's degree in theatre, Henson pulls up the curtain to her food trailer every evening and starts the show. Her cat-eyed glasses and pinned-up hair might be the first thing you notice when you walk up to the trailer, but everything gets blurry once you bite into the likes of her deep-fried brownie bites. That molten chocolate center will have your eyes rolling inside your head every time.

Henson grew up in a "quinoa and carob sort of way," making her family's yearly trips to the town fair in Massachusetts a magical time that allowed the rare opportunity to eat fried dough. Today, she serves nostalgia late into the night. She makes her batter from scratch and coats her corn dogs the old-fashioned way – by putting the batter in a glass milk jug and hand-dunking each hot dog to get a perfect cylinder. While deep-frying may not be held in as high esteem as baking, Henson said it's a tricky process that she's dedicated herself to doing "really, really well." 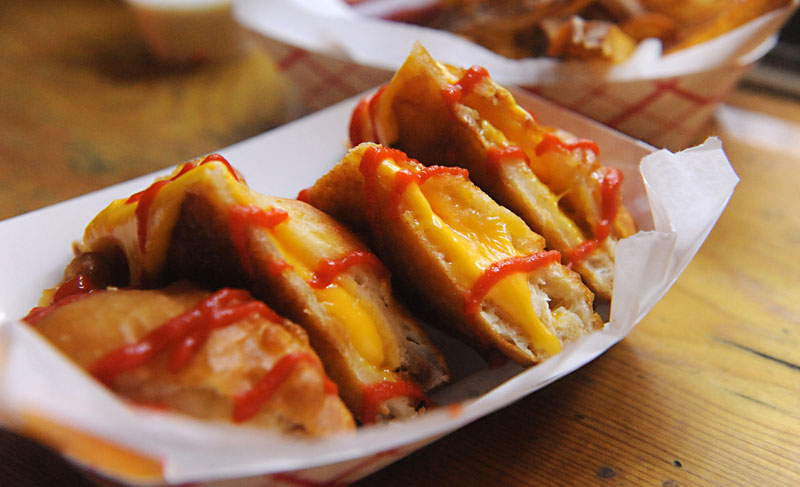 
Little Lucy's started as a dream to replicate owner Adam Morgan's memories of family vacations to San Francisco, where he regularly made a pilgrimage to Pier 39 for a taste of mini-doughnuts. Now any Rainey Street-goer can feel that satisfaction of popping a whole fried delicacy into your mouth, of cinnamon sugar sticking to your lips like the sweetest kiss. And while food stands at the fair must sing their swan song before winter hits, business picks up for Little Lucy's when the temperature drops. "Baked goods are synonymous with cold [weather] comfort food," said general manager Anton Montoya.

The mini-doughnut shop started a little over three years ago in a '72 vintage postal truck, which is still used for catering events. A trailer stays put in South Austin with Montoya at the helm, serving the bar scene with a simple but delectable, made-to-order menu. The "Donut Robot" fryer gets to work dropping rings of dough into a vat of oil, which are then flipped, fried golden, and taken down a conveyor belt until they're ready to be dusted with a flavor of choice, such as the seasonal pumpkin spice or the traditional cinnamon and sugar. Your mini-doughnut indulgence can come in two sizes of bright pink bags – small, or large for a dollar more. You can also get Ghirardelli dipping sauces for the full West Coast effect.


Lard Have Mercy doesn't shy away from the truth: Their menu is mouthwatering and full of sin ... no, wait ... scintillating dishes. The running theme is bacon, from the Pig Sty (a hot dog wrapped in bacon and topped with grilled onions and spicy mustard) to the Juicy Lucy (cheese-stuffed beef patty, hickory-smoked bacon, and the fixings) to a side that goes with everything: bacon-flavored french fries.

Owner Chris Cooper hails from the DFW area and remembers going to the State Fair of Texas every year with his family. With Lard Have Mercy, he's able to answer people's prayers for inventive deep-fried food without having to wait for the annual event to come around. "Not all the time can you make it to the state fair as an adult," Cooper said. "So why not try it at home?"

The secret to Cooper's cooking is his double battering, a method he learned from the woman who taught him everything – his mom. The Lard Have Mercy trailer has been dedicated to catering events for the past few months, but Cooper says it will return once again to the South First Food Court in early 2016.


Food trucks dedicated to the art of mac & cheese have come and gone, but Mac Daddy's has proven to build a fan base over the seasons. Recently celebrating its first anniversary, owner and operator Christoph Terrell celebrated the West Campus food trailer's milestone by taking photos of his regulars and posting them to its Facebook page. Business is on the upswing, he said.

Using rotini and cheese as the foundation of his menu, Terrell uses his creative license to create one-of-a-kind variations of an American staple. The sauce is a mix of four cheeses and a garlic béchamel, and the toppings can vary from current special Hatch green chile and chorizo to the crowd-pleasing Spicy Pig, which features maple bacon and sautéed jalapeños. Customers can also take their pick of ingredients to create their own flavor profile. Each dish is then topped with panko crumbs and baked to order.

"I don't like making food that you can get anywhere else," Terrell said. "If you're going to be inspired by the art of cooking, you need your own ideas. Mac & cheese, sure, it's out there. But I've never seen it done like this." 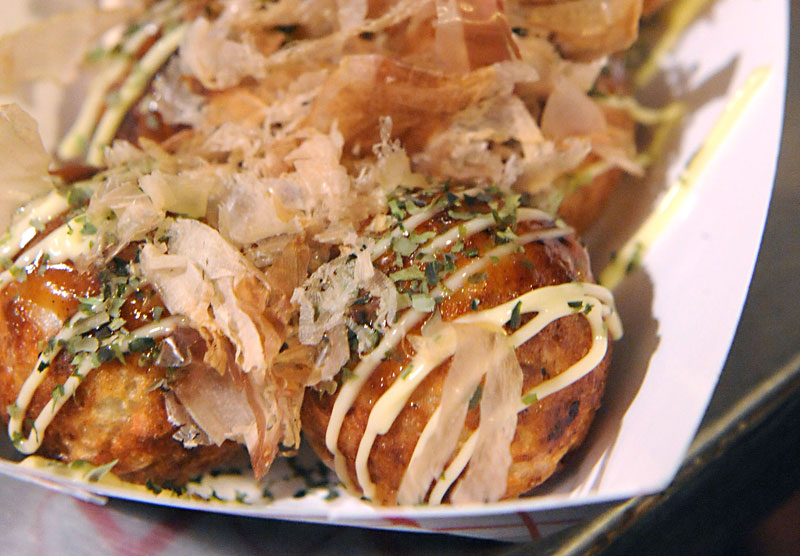 Takoyaki is not your usual state fair food, but these pan-fried pancake balls are a mainstay at any festival or outdoor event in Japan. And according to Love Balls owner Gabe Rothschild, Japan knows how to do festivals right. "The fireworks are the best I've ever seen," Rothschild said. "And you eat takoyaki. Or if you go out for hanami – a flower viewing for when the cherry blossoms come out – on the outskirts of the park there will always be a takoyaki stand."

Rothschild received his first takoyaki grill as a Valentine's present from his then-girlfriend in 2009. Together they learned how to make the snack, which involves pouring a pancake-like batter onto the molded griddle, adding octopus, pickled ginger and scallions, then using skewers to rotate the mixture and create balls.

When they moved to Austin in 2011, they noticed the restaurant scene was lacking in Japanese comfort food and opened Love Balls to fill the gap. Other dishes they serve include buta kimchi (stir-fried pork belly and kimchi), garlic yaki-onigiri (grilled rice ball with garlic soy sauce and served with a seaweed wrap) and tako kara-age (deep-fried octopus served with a spicy mayo dip). Rothschild's goal with Love Balls is to serve Japanese food that's affordable and accessible.

Trailer Parked
The yin and yang of food trucks and bars 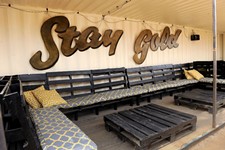