Fukumoto, the eponymous new eatery from former Musashino chef Kazu Fukumoto, comes at a time of ennui for the Austin restaurant scene, where signifiers like "New American" or "farm-to-table" carry all the excitement of skim milk. It was bound to have an audience, if only as a last stop in our town's endless Duck, Duck, Goose. Concept only keeps the wandering hordes of local diners captive for so long, but luckily Fukumoto has the skills to back his acumen. The concept is the izakaya, not all that different from a gastropub or a tapas bar in that it encourages the sort of casually boozy, small-plate sharing that marks contemporary dining. As we tend to be, Austin is a little behind the curve of the trend. The now-closed Dojo, arguably Austin's first izakaya, beat Fukumoto by a couple of years, but not the first San Francisco trend pieces.

Trailblazing or not, the American izakaya now has some currency, and a design shorthand has developed that usually involves the judicious application of wood. At Fuku­mo­to, the planks lower the ceiling in the kitchen and bar, form the table tops and seating, and act as wainscoting in the main dining room. Elsewhere there are washes of white and surfaces covered with river stone mosaic and burgundy (cork?) wallpaper. Bare bulbs sub for the traditional red lanterns. There's not a lot of whimsy, save for the saké barrel host stand and the bidets in the restrooms, but large windows facing East Sixth give plenty to look at if you are bored with your partner. 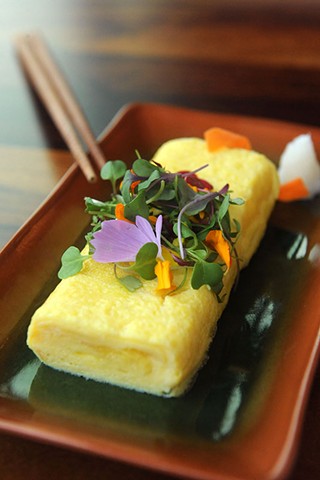 Better yet, close your eyes. An izakaya's food isn't particularly known for its subtlety, but sensuality is rarely subtle anyway. Fukumoto traffics in flavors that cut through the haze of an inevitable buzz. And nothing on the menu has quite the punch of the yakitori. The soy and sugars of the sauce, in concert with a charcoal basso profundo, harmonize beautifully whether on (the surprisingly tender) chicken gizzards ($3), heart ($3), or thigh ($3.50). The tsukune (chicken meatball) ($5.50) is even better, fortified with a pour of quail egg and a dip of bonito. The kushiyaki went bolder, whether a nicely fatted pork belly ($4.95), a folksy bacon-wrapped asparagus ($3.95), or beefy tongue special ($4.95). Order everything offered with the daily pickles ($6.50) to occasionally clear the palate.

But the boldness doesn't mean that Fukumoto is all hammers. The fried dishes, hearty as they are, have a surprising delicacy. The veggie tempura special ($12) let okra and kabocha shine through the lightest of coatings. The salmon and fig ($12) had the same weightlessness in the batter, but we wanted some interplay between the two, a difficult task with the large, separate pieces. But never mind that when there's the cornflake-crusted shrimp ($10). It's an artful dish, woven with blistered shishito peppers, microgreens, and lime, popping against a Japanese interpretation of a remoulade. It's all crunch and tang, the kind of dish that seems easy to replicate but will never be made quite right at home. Elsewhere, the agedashi tofu ($7), traditionally served in a shallow pool of dashi and topped with katsuobushi, was buoyant, and as great a start to a Fukumoto dinner as the oshibori.

There should not be any doubt left in this town that Chef Fukumoto knows his sushi. Here, he makes no concession to strip-mall palates in the nigiri – offering a delicate monkfish liver ($3.75) alongside mainstays like salmon ($3.50) and yellowtail ($4). The sweet, but not cloying, tamago ($3.75) works as dessert for those wanting something lighter than the seasonal specialties the restaurant serves. The maki menu steers clear of California and Philadelphia, with simple negitoro ($9.50) and a balanced squid roll ($7.50) teasing all the freshness out of shiso and cucumber.

Although the food is consistently good, drink is also integral to the izakaya experience. Here they fall short. There's a considered list of good, mostly affordable sakés like fruity Wakatake Onikoroshi "Demon Slayer" ($14 glass) and citrusy, floral Konteki "Pearls of Simplicity," ($12 glass), but could use a little more breadth (only three or four choices represent each style). The cocktail list is minimalist too, up to three choices after opening with two. Both the Shiso-tini ($7.50) and Fuku-mule ($9) were fine, refreshing and light, but we hope Fukumoto is able to add a full bar and cocktail program as they hit their stride. The beer list, although not unduly large, does add some much-needed depth with complex selections from Baird, Hitachino Nest, and Live Oak.

The only other quibble is a service staff that seems nervous and rushed, despite being friendly and knowledgeable. That slightly mars a place whose overriding emotion should be bonhomie. We suspect that's a result of the sudden popularity, and not some fundamental crack. In Austin, mature hospitality is often overlooked in orgiastic buzz. It's certainly not needed for success, but here's to Fukumoto outliving the trend.

A version of this article appeared in print on November 20, 2015 with the headline: Conceptual Art