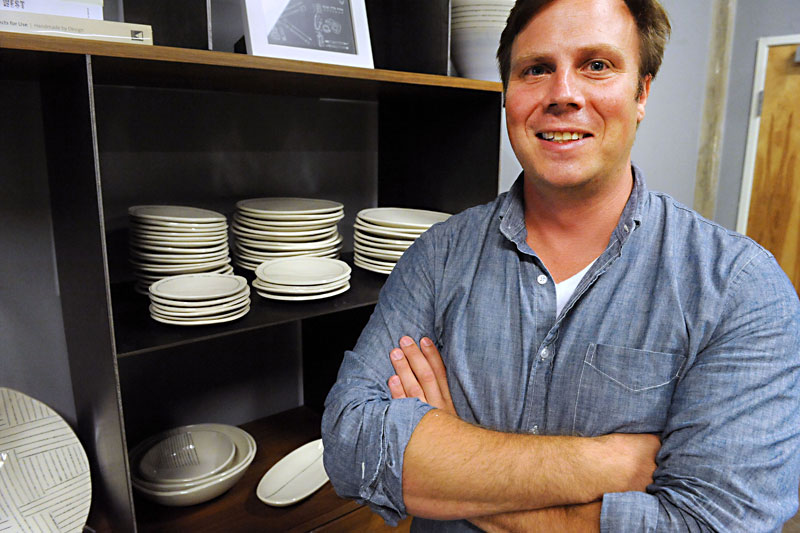 Austin's close-knit culinary community is accustomed to dinners where chefs collaborate with winemakers, craft brewers, or distillers, but the Make. Eat. Drink. dinner is a creative shift. Five years ago, respected local ceramic artists Keith Kreeger and Ryan McKerley came up with the idea of a dinner where potters and chefs would work together to raise money for Big Medium, the local nonprofit responsible for the annual East Austin Studio Tour. Now the dinner is one of the hottest tickets in town – selling out in about 48 hours at $195 each.

Kreeger and McKerley both have art pottery studios in Austin, and for those who don't yet recognize their work by name, you may well have encountered some of their functional pieces in high-profile restaurants. Kreeger's plates, bowls, cups, and mugs are a key element of the design aesthetic at qui, while McKerley's espresso and coffee cups serve guests at Juniper, a new Italian restaurant on East Cesar Chavez near his studio. He is also working on plates, bowls, and salt cellars for the upcoming Geraldine's in the Hotel Van Zandt in the Rainey district, as well as some pieces for their gift shop. Again this year, Kreeger has invited longtime friend and Massachusetts ceramicist Michael McCarthy, to work on the project. You can find examples of McCarthy's work on the tables of Uchi Dallas.

The Make. Eat. Drink. dinner will be held at Franklin Barbecue on Wednesday, Nov. 18. Kreeger asked Austin's famed brisket whisperer to host the dinner and recruit other East Austin chefs to join in. "When you think about craft, process, and a respect for materials, it's clear that Franklin Barbecue is the perfect place to hold this event. Aaron and Stacy [Franklin] have been amazing to work with. It's a true collaboration on many levels," says Kreeger. Aaron Franklin invited Alexandra Manley, executive chef at Bufalina, and Andrew Wiseheart, chef and co-owner of Gardner to join him. "I don't really do this kind of thing very often, but when Keith approached me, it sounded like a good opportunity to have some fun with some guys who are also my good friends," Franklin said. The three chefs had a planning meeting over beers at Franklin's and developed a very collaborative, smoke-inspired menu. "Instead of each one of us working on a specific course alone, we came up with a menu where we're really all over each other's courses," says Franklin.

For instance, Manley's smoked chickpea soup will be garnished with elements created by both Wiseheart and Franklin, and Wiseheart's butternut squash agnolotti pasta course will include a sauce made from Franklin's smoked beef ribs. Even the dessert of pears basted in honey, butter, and juices will be roasted in a wood-fired oven. The menu will be rounded out by an Arabian freekeh grain salad from Manley, and Wiseheart's purée of roasted fall vegetables. For his part, Franklin is planning a sous-vide preparation of tri-tip steaks finished with a sear on the grill.

Once the menu was set, each chef met with one of the potters to discuss the creation of serving pieces to correspond to each dish. Discussions of both form and function were part of these interdisciplinary collaborations. "I visited Ryan McKerley's studio, which was very cool, and got to see what he can do with different kinds of finishes and glazes. We decided on a soup bowl with a wide rim so that the soup garnishes can be arranged on the rim for people to add to the soup however they would like," Manley reports. McCarthy is bringing wide, flat bowls for Wiseheart's pasta dish, and Kreeger is working on an as-yet undisclosed surprise element for serving the main course. We're told Kreeger is creating a riff on an iconic barbecue-joint serving piece for the main course, but the artist wants it to be a surprise for the 42 lucky ticket holders when the meal is served. Those diners will also have the first opportunity to purchase pottery pieces created for the dinner at the end of the meal.