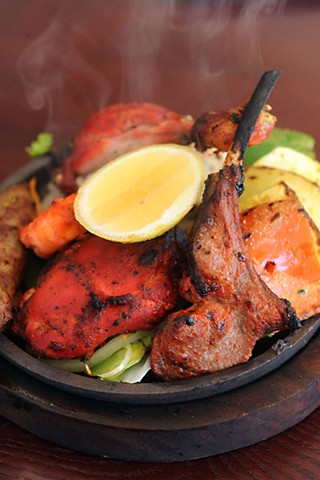 The growth curve of most American cities can be mapped by the character of its restaurants. Small Town America serves up an all too predictable assortment of hamburgers, steaks, and fried objects peppered with a customary nod to regional traditions. In Texas and the Southwest that usually means Mexican food. But as a city grows, its restaurants change with it. Medium-sized American cities generally offer more variety when it comes to global flavors: Italian, French, Japanese, Chinese, Thai, Vietnamese, and Indian restaurants can now be found in most communities of consequence. But you know a city has hit the culinary big time when it starts to have restaurants from some of the lesser known food communities like Romania, Peru, or Senegal. 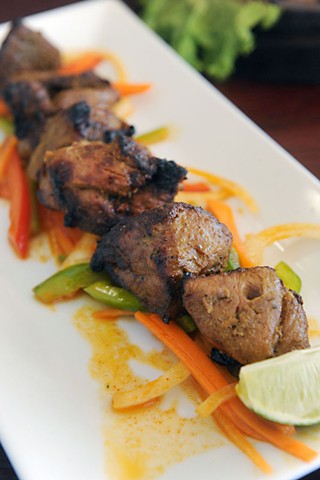 Austin's own restaurant trajectory has followed this same curve as the city has matured, demonstrating an ever-increasing array of options to spice up the urban flavorscape. The newest country to enter the culinary pantheon here is Nepal. The restaurant is Saffron, and we couldn't be happier not to have to trek across treacherous mountain terrain to get to it.

Nestled comfortably in Northwest Hills' commercial strip along Far West Boulevard, Saffron should not be confused with its predecessor in the same space, Indian Palace, which closed in early 2015. While Saffron does also serve foods of India, the new owners say the similarities to the previous restaurant are entirely coincidental. Saffron's concept is more fluid, combining the flavors of Nepal and India with a modern dining sensibility. Take the Bombay Brussels ($7), which clocks in on the current fad for roasted sprouts in a big way. Saffron's crispy take offers a subcontinental rendition, tossed with creamy mustard and Indian spices. Trendiness aside, these are truly delicious and as my 6- year-old daughter told the waiter, "I could eat a whole plate of these things." As far as I am concerned, any place that gets a first-grader to eat brussels sprouts is all right by me. 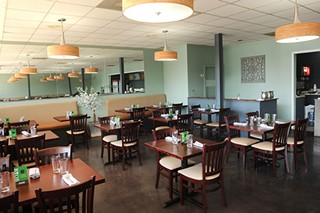 Blurred genres can get confusing though, and it is clear that Saffron is still finding its identity both within the immediate neighborhood and among the wider dining public. The old Indian strip-center restaurant has been given a clean coat of paint and new light fixtures, but the bare walls and minimal decor make the place feel strangely sterile, as if its personality is still emerging. Is it a white tablecloth place or a stripped-down diner? Is it Indian, Nepalese, or somewhere in between? After a few trips, I found I didn't really care because the friendly service and generally solid cuisine mitigated all of Saffron's initial awkwardness.

Unlike so many of the Indian restaurants around town that seem to put their stews together in assembly-line style (make sauce, add cubed chicken breast, stir, serve) the curries at Saffron have a homey quality that makes them seem quite genuine. The saffron goat curry ($16) has a terrific slow-stewed meaty twang without being overly fatty. A redolent chicken curry from the daily lunch buffet also had that slow-food stamp – in this instance, maybe a little too slow. The bones from the bird were beginning to fall apart, making the eating of it a choke-at-your-own-risk proposition. On the other hand, the chana masala ($11) is among some of the best I've had, with tender chickpeas richly layered with browned onions, coriander, cumin, and cardamom, among other spices. Murgh shahi korma ($13), chicken cooked in creamy cashew and pistachio curry, is fit for princes.

While the Indian dishes at Saffron are definitely worth sampling, the real attraction are the Nepalese specialties. These are hybrids that reflect the tastes and cooking techniques of the mountainous country sandwiched between northern India and western China. Must-haves include the pan-fried or steamed momo ($6 or $9) and the gobi Manchurian ($7). First the momo: Not unlike a Chinese soup dumpling, Saffron's momo are homemade dumplings filled with curry chicken, savory broth, and served with a spicy sauce that is one part tangy curry and two parts yummy. Gobi Manchurian are like cauliflower pakora tossed in Chinese sweet and sour sauce. Spicy lamb kabobs with pickled vegetables (lamb sekuwa $12), roasted potatoes in chile sauce (aloo chile, $8), and curry-flavored chow mein ($8-12) round out the Nepalese eats with surprising twists on the familiar, like a small virtual adventure.