The Roosevelt Room hopes to bring even more sophistication to a Downtown block that in recent years has broken away from the college-oriented bars of Dirty Sixth. Championing that shift are proprietors Justin Lavenue and Dennis Gobis, a pair of award-winning local bartenders who bonded over a mutual vision for a craft cocktail bar concept while at the Tales of the Cocktail conference in New Orleans. Lavenue and Gobis, together with Lavenue's father, Marsh, acquired the Roosevelt space in January, along with the adjacent Madison event space.

"A lot of people who have matured in the Austin cocktail scene went to perimeter spots," notes Gobis, pointing to Drink.Well in North Loop and Weather Up and Whisler's in East Austin, "but now you're seeing this revitalization of the CBD [Central Business District]: Josh Loving's Small Victory is opening up; Justin Elliott taking over the Townsend; Chauncy [James] doing Garage Bar. All the boys over at Midnight Cowboy and Firehouse [Lounge] .... You can now have a wonderful evening touring Downtown, and you don't have to get a Lone Star."

Originally the Madison and Roosevelt Room space housed one nightclub. But after the Foundation's closure in 2007, the landlord erected a wall and subleased each side separately. The Madison's mirror image hosted a slew of bar concepts, but often sat vacant, and Lavenue and Gobis recognized an opportunity to be a part of West Fifth's renaissance. Plans for next year include demolition of the shared wall and a complete remodel, which will include a full-service restaurant on the street level, a cocktail bar on the mezzanine, and, if permitting allows, a rooftop patio bar. The collective concepts will be called De Rigueur, a direct reflection of the entrepreneurs' shared views on hospitality.

"The space has great guts," says Lavenue, gesturing to the original brick and exposed rafters. While construction plans eventually call for total demolition of both sides, don't call the Roosevelt Room "temporary." "Right now, we're trying to make the absolute most of this space," Gobis says. "Every guest that comes in, we want them to associate this address on West Fifth Street with the best cocktails in town." Luxurious banquette booths line one wall of the shotgun 1929 warehouse. An opulent bar top with warm uplighting invites patrons to peruse the extensive, historically inspired menu mounted above shelving stocked with nearly 300 bottles. "The rest of the room disappears because you're just in the glow of the bar with your drink in front of you, and now with the new back bar, people rarely turn their heads," marvels Gobis. "They're affixed on everything that is happening in front of them, which is wonderful, having a captive audience."

Lavenue was recently named Bombay Sapphire's 2015 Most Imaginative Bartender of North America, and Gobis' accolades include winning Domaine de Canton 2014 Bartender of the Year and making Zagat's "30 Under 30" list last year. The honors have afforded each to travel extensively, during which they've taken mental notes (and photographs) of elements of style and functionality that might influence De Rigueur's final conception. "We don't take pictures of our food," explains Gobis. "We take pictures of chairs," he laughs, adding, "I've taken more pictures of urinals than I'd like to admit."

Demolition for De Rigueur won't begin until at least after SXSW, and likely the Madison will break ground while the Roosevelt continues to serve. A grand opening of all three concepts is anticipated for fall of 2017, but "no timelines," insists Gobis. "We have a dream. But right now we have a very functional and very operational business that people are absolutely loving, and we're having fun doing it." 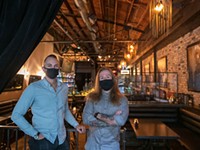