Craft and quality at Bone Spirits 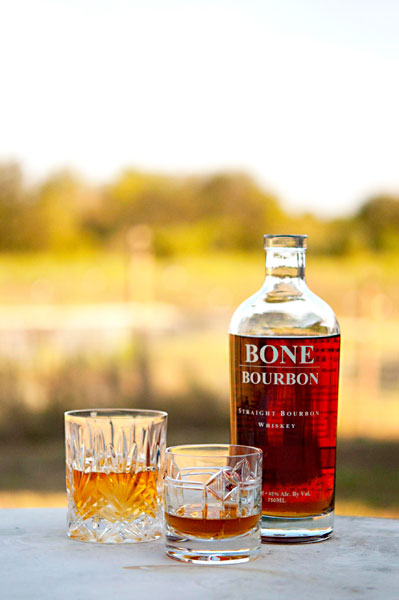 Foodies frequently turn their noses up at the term "farm-to-table," brushing it off as cliche. On one hand, that's valid because every hip "New American" restaurant uses that as a tagline. On the other, most of these armchair critics clearly haven't spent a day on a farm.

Sure, the term is now tossed around as casually as a wilting frisée salad, but let's not negate the fight that it took to finally make people give a damn about where their food comes from, and the battle against the unpronounceable ingredients and frozen packages of big food companies. It's understandable why consumers are wary of buzzwords, but it doesn't make the meaning behind them any less significant.

But farm-to-bottle? That, and "every drop from scratch," is how Bone Spirits of Smithville defines its liquor line. Earlier this year, they released Bone Bourbon, a straight bourbon made with corn and rye, then aged in new, charred white oak barrels for over two years. Bone Spirits owner Jeff Peace is fiercely proud of their distilling "from scratch" method. But he finds it challenging to inform the public about the significance of his approach. "At first, I was hoping they cared. Maybe I was more aspirational, thinking, 'Oh, this is Austin. This is really going to click,'" he explained with a tinge of disappointment. Peace acknowledges that food and drink enthusiasts appreciate his dedication to his craft. "For the masses, the everyday consumer, I don't know," he shrugs, "I think it comes down to packaging and price."

The "from scratch" concept is actually very straightforward. There are distillers, like Bone Spirits, that source their own locally milled grains, then ferment and distill them into liquor. And then there are liquor labels that purchase bulk batches of pre-made, neutral-tasting liquor, then add flavor to it by infusing (e.g., gin), barrel-aging (whiskey), or simply adding flavorings (cupcake vodka). This process is a lot quicker, more economical, and certainly less involved. "A lot of folks are knocking on our door to sell us their bulk spirits," Peace explains, "it's extremely attractive, but my distillers will not touch it."

Peace's stubbornness to his process started when he helped launch major liquor brands. "Glacier water, 100 times distilled, diamond filtrations. I knew they were all frankly gimmicks, smoke and mirrors," he recalls. He said that his biggest regret when working with Grey Goose was importing it from France instead of crafting it from scratch. "The more popular we got, the more expensive we got," he explains. So when he launched Bone Spirits in 2010, whose name represents his bare-bones distilling method, he was adamant not to be what he calls "held by handcuffs by a producer."

The benefit of not purchasing bulk spirits is that the distiller has much more control over each step of the process, and ultimately, the product's quality. For sustainability, Peace purposely sources his grain as close to home as possible to reduce the carbon footprint. (The corn is fully Texan; Oklahoma is the closest that he can source rye, which grows in colder climates). After the pot still distillation, farmers pick up the spent grains to feed their livestock or use as fertilizer. "When you introduce the words 'farm' and 'farmers,' there's an expectation of craft and quality," Peace explains.

That pride in product yields a bourbon that is nutty and faintly smoky on the nose, with pronounced spicy vanilla notes at first sip. Rye makes up around 20% of the product, resulting in a drier, earthier, berrylike finish that balances nicely with bourbon's signature sweetness. Inevitably with younger distilleries, their aged spirits are less seasoned, so do expect a kick that should hopefully mellow out with age.

For a full list of Bone Spirits products, visit www.bonespirits.com.