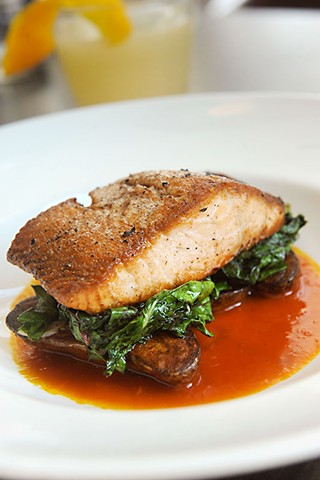 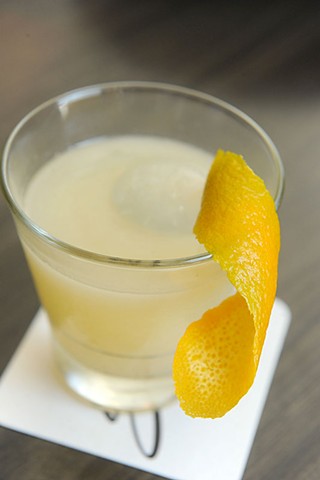 It's a fairly bold statement for a non-locally owned restaurant to make: "Austin's free spirit without the pretense." It's a little bolder when that free spirit is housed inside an outpost of an upscale hotel decorated with hollow signifiers from ATX cool (succulents, guitars). Sure, it's a tagline – as ultimately meaningless as "I'm lovin' it" – but there's something a little disturbing when outsiders choose to paint the town in those terms, and then choose to buck against it. It may be a sign that our food scene, at least by perception, is getting a little too big for its britches.

But a lack of pretense is not a concept. Stella San Jac, the eatery occupying the Downtown Westin, is still struggling with that. Another bit of marketing copy describes executive chef Michael Cerrie's food as "Austin-American," although chorizo and a Rebecca Creek whiskey barbecue sauce are the only real nods to location. Instead, Stella (bellow it like Stanley Kowalski) is a latecomer to the brief Southern blip Austin enjoyed before prospectors nearly universally decided to break out their old DVDs of Molto Mario. But where Olamaie and Fixe are both fiddling with heritage, Stella comes closest to actual home cooking. That's where the informal mission statement comes in. 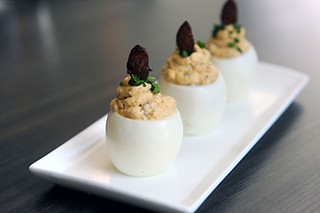 Take the appetizer (pardon, small plate) of deviled eggs ($6). Your grandmother probably never piped the filling into the upturned egg like a cascarone, but the mixture itself is the stuff of a thousand Fourth of July picnics (save for the chip of andouille). Simple. The beet chips ($5) – served in one of those terrible fry cones – are served with dill dip. Simple again. And then there's the Bacon & Egg ($11), pork belly with a quail egg served on creamy grits, or the Escarole & Parmesan Bowl ($9) that hovers somewhere near a Caesar. Simple is as simple does. 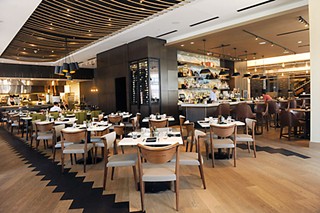 But any Southern cook who has labored over a dark brown roux knows: Cooking isn't always that straightforward. Cerrie has the patience skills to make one of the best biscuits in town ($5), but the more involved the components of a dish, the more likely it was to be uneven. That was previewed in the cocktail menu. The three-ingredient mezcal paloma ($10) was refreshing and light, but the Plum Creek ($10) – with whiskey, plum and black walnut bitters, and egg whites – was just short of saccharine. We didn't try the infusions for fear gimmicky Tron-like Porthole infusion vessels, but we suppose it would add a certain ceremony to the proceedings, even if complexity had proven to be Stella's bugbear. 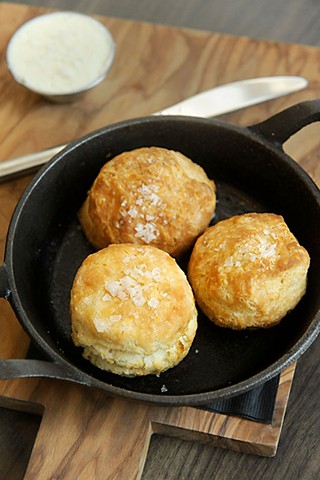 That was certainly true with the large plates. All the components of the salmon ($23) were done right. The salmon was juicy, the potatoes fork-tender, the rainbow chard still had a little bite. But the balance was off, overwhelmed by the bright pool of tomato essence. There, the salmon needed pepper, the fingerlings wanted salt, and the chard could have used a good toss of bacon grease. The diver scallops ($25) had the same lack of anchoring. Again the technique was there in the melting protein, but the salad – a slightly sweet punch of fennel and orange – seemed to belong to another dish entirely. Even a lunch sandwich with fried green tomatoes ($11) was afflicted with too much bacon jam.

But Cerrie does find his footing on the land. The Berkshire pork chop ($27) balances a bump of finishing salt with a mildly spiced chorizo cream, served with expected but well-executed brussels sprout halves. The short rib ($21) had some sweet, but that was balanced by the green apple slaw, both in flavor and texture. The juicy Stella burger ($13) starts as a standard take with butter lettuce, heirloom tomatoes, onion strings, and white cheddar – but it gets an extra jolt from Alabama white barbecue sauce, the kissing cousin of ranch.

We wish the interior felt a little more at peace with the more successful down-home flavors. Open to the hotel lobby, the beiges and grays are dragged down in their anonymity. It's certainly tasteful, but it lacks a little soul – even when it is packed to the gills. But perhaps that's as apt of an analogy as we are likely to get for the mixed offerings at Stella. Cerrie's food may long for some semi-invented halcyon day before restaurant and home kitchens didn't require entirely different skill sets, but that "free spirit" really doesn't exist anymore. We admire the attempt, but it turns out you really can't go home again.

A version of this article appeared in print on October 16, 2015 with the headline: The Spirit Is Willing