A Good Coffee Shop Is Not That Hard to Find

Finding home in the bottom of a cup 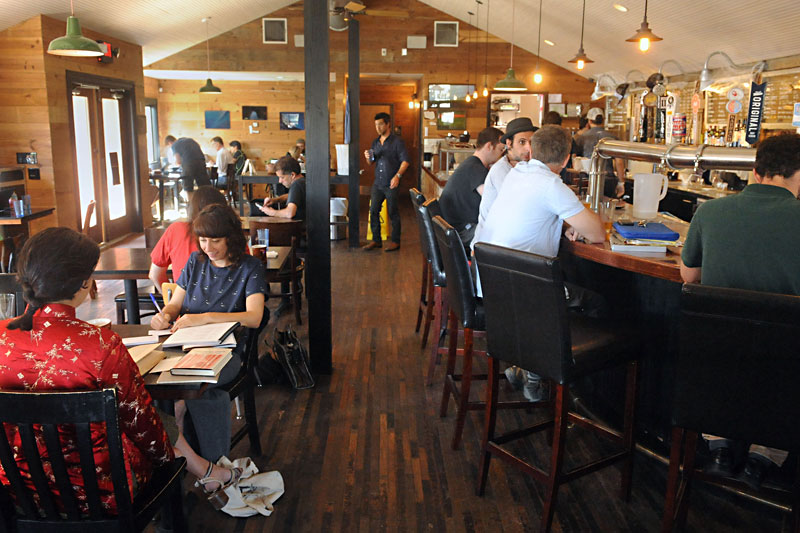 When my husband and I moved back to Austin from Houston seven years ago, I told my mother, "I think we'll like Austin more this time around. We won't spend every moment of our life at UT, and we'll find a coffee shop that isn't Starbucks." What I'm saying is we had goals. Fast-forward four years, and I'm sitting on the couch at Houndstooth on North Lamar, drinking a cappuccino and nursing a 1-year-old under a sweater. An old man walks over to me and says, "I love nursing." He then hands me a flier of what appears to be a pencil drawing of himself next to a series of either ears or vaginas. I say, "Thank you," and place the paper in my wallet, where it will stay until someone asks, "What's the weirdest thing anyone's ever given you in a coffee shop?" and I say, "Just a minute," and then, "Here's a pencil drawing of an old man and some ears, maybe even vaginas."

A good coffee shop will serve you a nice cappuccino with little to no Coldplay on the radio. A great coffee shop will do those things plus surround you with a pleasant mixture of normal people and people who draw pictures of themselves next to ears (or vaginas!) and hand them out to nursing women. Both are nice.

I love Houndstooth. Houndstooth is where my daughter (older and no longer nursing) made a new, slightly younger friend and sang "Twinkle, Twinkle, Little Star" with her, until the little girl noticed my daughter wasn't correctly pronouncing "star" and said, "Tar? No, no. It not tar. It star." I have it on video, and my daughter's facial expression when corrected is a mixture of awe and, "I'm going to pretend you didn't say that." Houndstooth is where my son asked me to make up a game, and I said, "OK, reach down and pick up an imaginary penny." I actually said the words "imaginary penny." My son then reached down, and I tickled him. That was three years ago, and I'm not sure, but I think that was the last time my son asked me to make up a game.

Houndstooth is where I first read the David Foster Wallace short story "Mister Squishy" and where, two months ago, I began Anna Karenina, the longest book I've ever read about clover farming and having an affair with a man named Count Vronsky. I'm still reading it. Houndstooth is where I went when I had the flu but didn't know I had the flu. I remember ordering tea and saying, "I feel tired today and a little bit like I'm dying." Finally, Houndstooth is where I went with my daughter when she put a skirt on her head and called it a veil. She walked in, shouted, "I'm getting married!" and no one acted like that was weird. If that's not reason enough to return to a coffee shop, I don't know what is.

When I'm not at Houndstooth and I'm looking for a coffee shop in a beautiful old house, I go to Cenote on East Cesar Chavez. I love their cappuccino (I mostly drink cappuccinos), and their omelette is my favorite in town. It's called the "Cenote Omelette," and it has goat cheese, arugula, and capers. I have never taken a friend or family member there without asking, "Do you like omelettes?" and then trying to convince them to order it. "Get the omelette," I say. Or, "It's omelette o'clock somewhere!" I am a fun person with friends.

Cenote is where my daughter and I used to go on dates when my son was in preschool. She would run in the door, peek around the corner, and check to see if our favorite couch was available. She would then shout, "Bagel!" until I ordered her a bagel. (They sell Rockstar bagels, and they are delicious.) Once, when I told her I couldn't try her bagel, because I wasn't eating gluten, she asked, "Why you not like gluten, Mama? Gluten is bagel, and bagel is good for your throat." She had a point.

On a recent trip to Cenote, my husband and I sat at a picnic table outside on their very lush, very green patio. My daughter sat on a large frog statue, and my son hula-hooped around her. If you've ever wondered, "Could a child comfortably hula-hoop on the Cenote patio?" the answer is "Yes." Also, if you've been looking for a coffee shop in Austin with a giant octopus bike rack, you're in luck! Cenote not only has the largest octopus bike rack I've ever seen, it also has the only octopus bike rack I've ever seen. And a great omelette!

Houndstooth and Cenote are my favorites, but there are so many other good neighborhood coffee shops in town. I went to Patika on South Lamar by myself one evening a few weeks ago, and even though I broke something and embarrassed myself, I loved the place. I walked in, heard the live music (Waterloo Trio), and quietly ordered a cup of orange spice tea. I sat down in the corner and looked around at the lovely space. I thought, "Well, this is relaxing." Then, just when the musicians had finished their piece and everyone had stopped clapping, I decided to pour myself more tea. Except I didn't just pour myself more tea; I dropped the teapot lid on the floor like an idiot who doesn't know how lids work. It shattered loudly in the almost completely quiet room, the couple next to me made twin wincing expressions, and someone somewhere shouted, "Mazel tov!" As far as Wednesday evenings go, it was eventful. 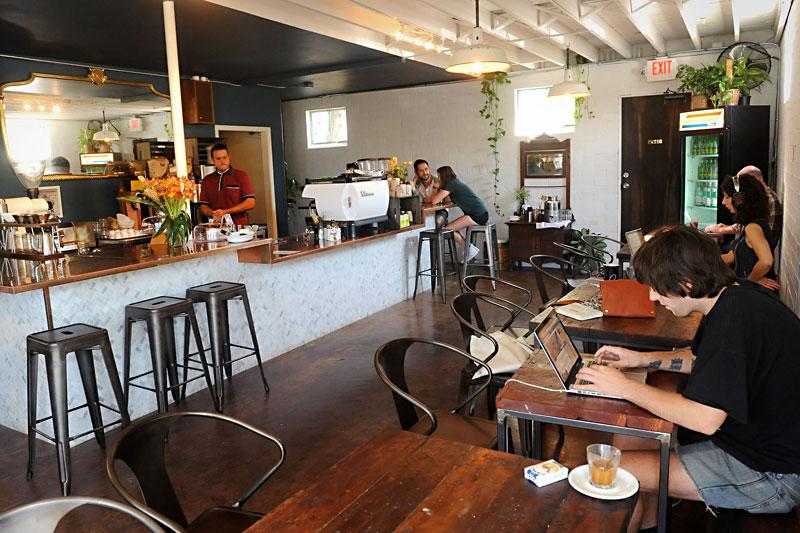 Another new-to-me coffee shop is Figure 8 Coffee Purveyors on Chicon. When my children are at school and I'm not writing, I like to take my best Tolstoy tome to a coffee shop and slowly read four to five pages while people-watching. At Figure 8, I saw lots of pretty people working on their laptops, a woman nursing her baby while visiting with a friend, another woman writing in a journal, and a man in a safari hat. I sat at the copper bar in front of a mirrored wall and listened to the man next to me on his phone say things like, "I know. I know." I drank a cappuccino and ate a gluten-free chocolate cherry cookie from Luxe Sweets. Both were great, and I left wondering how a cookie with no gluten could taste that good and not at all like a piece of wall.

Part of what makes Austin feel like home to me are its coffee shops. I will probably always miss certain places in Houston, but I'm surprised, seven years later, how much I like Austin, how much it feels like home. Seventh Flag Coffee on South First is where I ate a cranberry scone, and my daughter poured sand from the bocce ball court down her pants (they have a bocce ball court!). Radio Coffee & Beer is where my husband and I sat outside one hot afternoon, drinking kombucha on tap (Kosmic Kombucha's Texas Blues) and watching our children attempt to climb a tree. And the new Caffe Medici on South Lamar is where I went by myself to read, wasted time on Facebook, and overheard a conversation about "subsidized beef grazing on federal lands."

Here's what I know: There are as many good coffee shops in Austin as there are stars in the sky: more than 10. Some shine brighter than others, but they're all pretty shiny. The copper bar at Figure 8 is the shiniest. This is a terrible metaphor, but the last part is true. 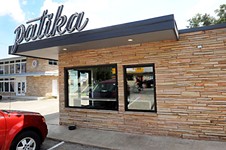 One More Cup
Austin is serious about coffee 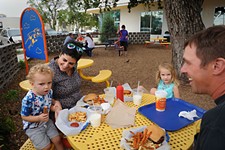