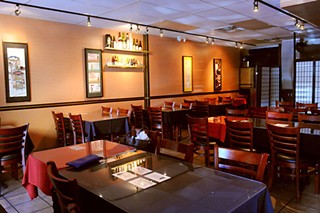 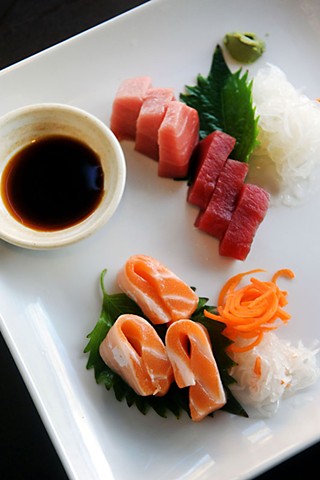 A few months into my tenure as the Chronicle's food editor, I made an informal declaration. The words "hidden gem" were henceforth banned from the section. In a dining scene covered by multiple media outlets, the phrase no longer had any utility. A restaurant designed by Michael Hsu is not a "hidden gem," nor is anything in the central city. If its menu lists ingredients and no preparations, the eatery is not a hidden gem. If there is a line out the door on Saturdays, it is not even hidden. But when a dining companion used the phrase on a less-than-busy Saturday night at Daito, I didn't blink an eye. I already felt like I pried open that oyster. The Guadalupe building, home to a few failed concepts and next door to the unfortunately named Love Goat, is a far jump from the glass palaces currently en vogue for restaurants. And it is obvious that no interior designer had any hand inside, but it's warm and comfortable. There are thousands of restaurants that have the same basic look, but at Daito, you soon forget the humble surroundings. Perhaps it is the dim lighting. Or maybe the vocal jazz and swing soundtrack. Or the saké. For $10, Daito serves a flight of sakés, three 50-mL pours from a curated menu, some only available otherwise by the bottle. There's plenty to keep snobs satisfied, including a coating Kenbishi Mizuho Junmai, but Daito is a great place for a beginner. Just let the server know what flavor profiles you like, and he or she will select a continuum, explaining each bottle along the way. The attention to saké is a good entryway into what quality means to this house. How many holes in the wall have actual Champagne? That quality continues with the appetizers. Kara-age ($6.50) may beat that other famous kara-age in town. I wished I would have saved the pickled kinpira gobou (burdock root and carrot – $3) as a mildly spicy palate-cleanser. Daito is serious about their dashi, and it is good enough to hold up on its own with onsen tamago ($1.80). It's even better as a film in the exquisite chawanmushi ($4.20), a flawlessly smooth custard hiding chicken, fish, mushroom, and shrimp. And all that is before you get to the udon, Daito's biggest claim to fame.

One would be hard-pressed to find better udon in Austin. Daito's is handmade daily and is the canvas for a variety of preparations. The cold, dipping-style curry tsuke udon ($9) was a luxurious brown, as deeply colored as a gumbo, thick enough to grab the slippery noodles. The spike of salt and spice, enriched by pork, were a nice foil against the blander base. The more nuanced zaru udon ($8.20), also served cold, is perfect for the waning days of Austin heat. The bowl of dashi is gentle enough to showcase the small bowls of accompaniments (pure flavors of nori, sesame seed, green onion, and ginger). It was just as delicious with soba ($7.20).

On the hot side, the kitsune udon ($8.80) was awash with tofu skins. Eat it fast to get the best texture. We couldn't help but take a bite of the shrimp meant for the tempura udon ($10), buoyantly crisp. The server apologized for there not being a larger selection of tempura, explaining that they were understaffed and the longer-cooking tempuras caused service to suffer. Although it was disappointing to miss, it's admirable that the restaurant would rather put a popular item on hold than serve something subpar. He promised it would be returning to the menu soon.

The owners may want to consider the verbiage on the Sashimi Daito ($13) menu description, which advertises a "chef's selection of reasonable fresh sashimi." We disagree. Everything we sampled was at its peak. The maguro toro (fatty bluefin tuna – $10) and buri (yellowtail – $7.30) melted, and there was no ropiness in the ika tanzaku (squid – $5.20). For less adventurous types, there's something called the Texas Roll ($15) on the menu. We are sure it is delicious (the quality here is great across the board), but it feels like a concession. The same was true of the layered anmitsu dessert ($6.50), a traditional dish with jellies, ice cream, mochi, and azuki bean. Can't win them all.

But in a town full of labored New American cooking, Daito's simplicity is a revelation. It won't be a hidden gem for long, but we can't imagine it ever losing its sparkle.