The yin and yang of food trucks and bars

When planning for that oh-so-happy hour where food and drinks intersect at bargain prices, many of us forgo the typical bar-and-grill establishment and instead opt for a bar whose trailer's Instagram has most recently stimulated our hypothalamus. If we've been dreaming of those savory morsels that are the deep-fried beets from East Side King – those spicy shallots, that tangy aïoli! – we might start the night out at Liberty (their happy hour 'til 9pm also buoys that choice). Other times it's the drinks with the draw – the homemade white sangria at Butterfly Bar, for example – and after imbibing for a few hours, we find ourselves grateful that Patrizi's pastas, pulled in-house (in-truck, rather), will soak up some of that liquid before the ride home. The undeniable fact is that the bar/food trailer combo is a tried and true arrangement that serves its mutual patrons well. So for purely educational reasons, we caught up with four young Eastside food trailers and their host bars to see how this symbiotic relationship is working out. 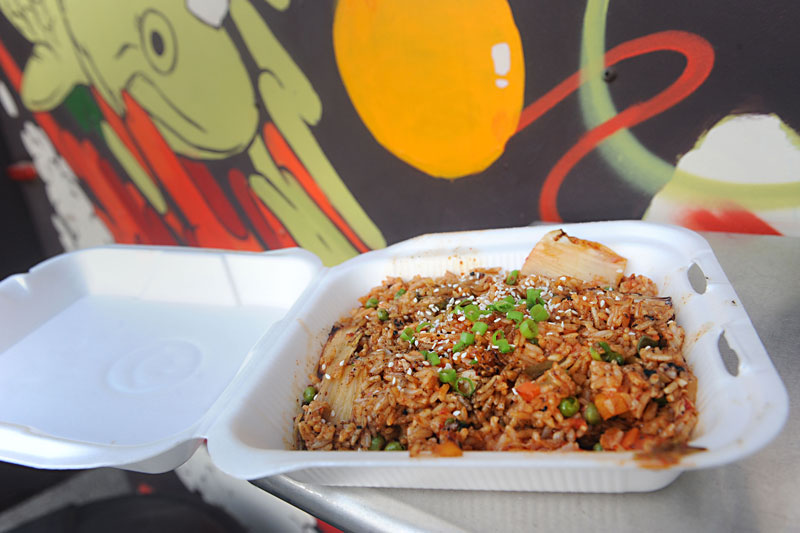 Kogi Q at the Grackle


Founders Mark Lang and Justin Sass began a kimchi-making endeavor at home for themselves and friends before realizing that they really had something with their product. Their commercial kimchi idea evolved into a full-blown Korean barbecue operation (kogi is Korean for "meat"). Before launching their trailer, Sass worked for the Uchi family while Lang was a part of the Home Slice crew. A mutual friend brought then-bar manager of the Grackle (now-owner Tim Murphy) a bowl of kimchi soup that Lang had made. Later on, Murphy called his buddy, a manager at Home Slice, saying their bar was looking for a food truck to co-habitate. "Just like anything in this town," says Lang, "you have to know somebody." At this point, Murphy had heard Lang's name more than once, and the wheels were set in motion.

"We definitely wanted to be at a bar from the beginning," says Sass. "Feeding people when they're drinking? That's like a public safety." They appropriately tailored their menu to include bulgogi, kimchi fried rice, japchae sweet potato noodles, and the Kogi kogo, a french-fry corn dog – one of the hottest things in Korean street food right now. "It's the most American thing to come out of Korea," laughs Lang. Tacos were eventually added, after confused customers repeatedly asked, "Where's your taco?" This is Austin, after all. Sass reiterates that they're there for the people, and with a little flexibility, have catered to what the people want. "This is a better concept for doing bar food," says Lang.

The trailer's menus are also scattered on the tables at new neighbor Zilker Brewery, whose garden supplies the lime basil for Kogi Q's squash salad. "We get call-in orders from them," says Sass. Families or high school students who can't get past Liberty's doorman for those aforementioned beet fries are referred to Kogi Q, which sits in the Grackle's front parking lot. "It's a great relationship we have with all the businesses," says Sass. 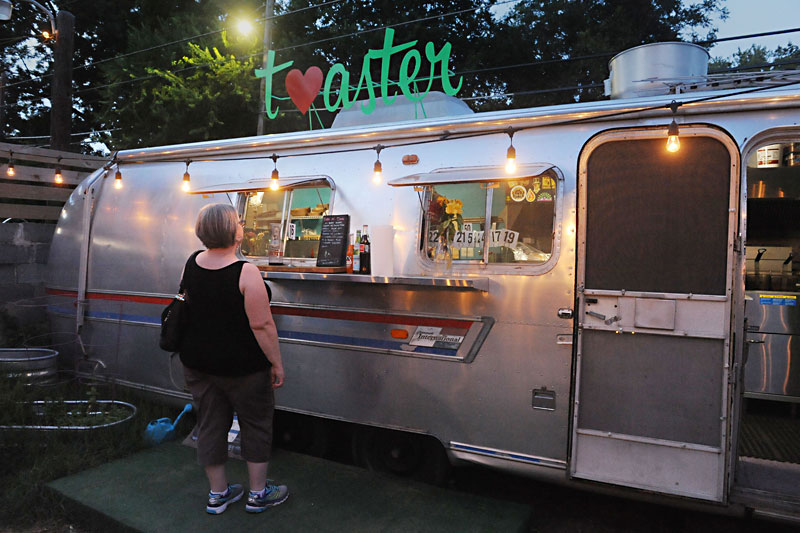 
Former McGuire Moorman pastry chef Hannah Love's shiny, curvy Airstream International trailer sits in Stay Gold's courtyard, serving home-style meals "just like your mamma made" to patrons of the soul/funk/blues venue. Stay Gold owners Nathan Hill (the White Horse) and Will Tanner (Hole in the Wall), old friends of Love's, gave her free rein when it came to designing the food truck's concept. Her pulled pork crunchy tacos are one of her favorite meals to make at home, so she knew they'd make the cut (they are the item that consistently sells out). The Tomato Soup Grilled Cheese tastes like it was dipped in that requisite counterpart. Pizzas, pierogis, and a "fucking delightful" baked mac and cheese round out the offerings.

Love says her relationship with Stay Gold is hardly like a landlord/tenant one and much more like a family. "It is a very mutually beneficial relationship," she says, pointing to the "guaranteed clientele" for her new and unknown restaurant. "And obviously people can stay longer if they can get food while they're drinking," she continues. "Toaster loves Stay Gold." 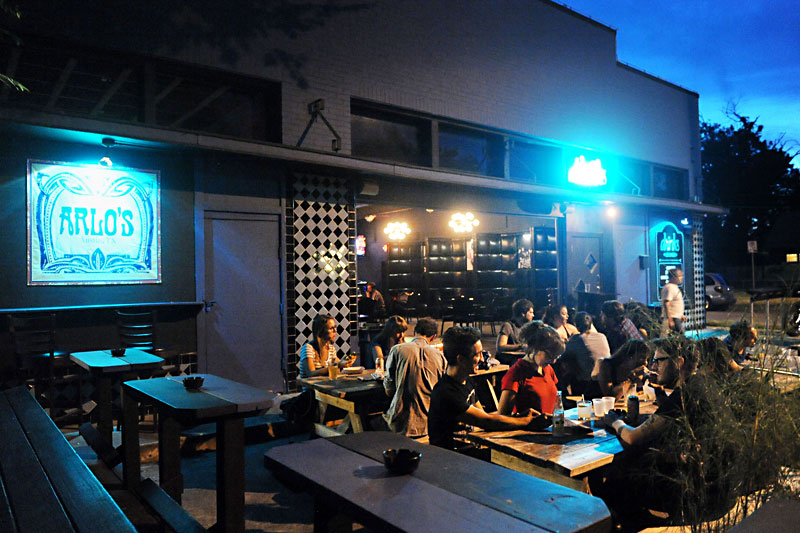 
Arlo's began slinging their vegan Bac'n Cheeze Burgers and Chik'n Tacos behind Hotel Vegas in 2011. After moving a few blocks down to Cheer Up Charlies, and then following them to their current Red River digs, Arlo's launched their second truck this year, initially parking at South Austin's Radio Coffee & Beer. Radio, which serves a large, early morning crowd, wanted something a little different than vegan comfort food, and Arlo's owner Christopher Baker acknowledges their meals aren't exactly breakfast fare. Their newest truck was on the move.

Arlo's general manager Ian Walling (and drummer for Riverboat Gamblers) answered Drinks owner Tim Lupa's call on social media for a food truck to operate out of the lounge's back alley. Drinks has always had a kitchen space in their building, but Lupa estimates it could cost up to $20,000 to convert it into a working kitchen. "I talked to friends of mine who own bars with kitchens, and they said that over here, I'm just gonna lose money," says Lupa. "They only break even on food, and it's just to get people in the door." In a neighborhood area without much foot traffic, Lupa decided the investment wasn't worth it. However, Lupa, who also owns the Brixton, knows the importance of a nearby food supply for his drinkers.

Baker says that future expansion of the Arlo's fleet will always involve a partnership with a drinking establishment. Regarding food trailer parks, those corrals of anywhere from three to 10 different cuisines, he says, "There are so many of them, and when you come in, there's so much to choose from. I don't know how you survive in that environment." Arlo's is more than content to live behind Drinks, even though no part of the trailer is visible from the bar or the street. Regulars and word-of-mouth seem to be enough for this location. "If things continue to go this well," says Baker, "we'll consider building a kitchen on the inside and cut a window where people on the outside can order." Arlo's moved into Drinks in August, and already the two businesses are discussing long-term arrangements, a sign that this relationship is not only working out, but flourishing. 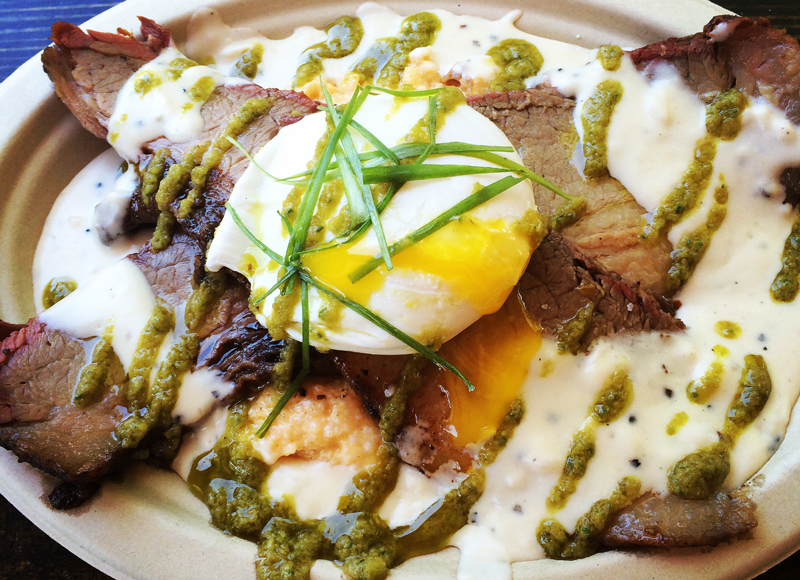 
The Hard Luck Lounge is White Horse co-owner and former Hole in the Wall manager Denis O'Donnell's latest venture, taking up residence on far-East Seventh Street. "We opened a bar that is not in an entertainment district," O'Donnell explains, "and our food has to grab the customer hard enough to make them want to come back." Enter Lady Luck, the bread-bakin', beef-brinin', seitan-smokin' operation run by Lynzy Moran and Virginia Pharr, both veterans of the food truck biz. They describe this menu as "international classics with a Southern perspective – kinda," and sourcing local veggies from Johnson's Backyard Garden and Springdale Farm means it's always rotating. "Our regulars are excited that there's always something new," says Moran.

Being off the beaten path, Moran and Pharr know that social media is paramount in spreading the word about their food. Enticing photos are regularly posted on Facebook, showcasing elaborate dishes like crispy eggplant with smoked tomatillo/avocado/grapefruit salsa and vegan chile cream sauce; or buttermilk-brined, spicy fried chicken served with potato salad; maybe the smoked pulled-pork tacos with pickled watermelon rind; or the O'Donnell Sando, 10-day brined beef on a kummelweck caraway bun. The extensive menu ensures that when large groups or families visit the spacious patio, there's usually something that appeals to everyone.

O'Donnell's other watering holes have always partnered with independently run food outfits. When asked if having a food component was deemed crucial to the Hard Luck Lounge's success, O'Donnell proudly claims, "Lady Luck has proven to be an invaluable part of our operation." TABC laws require that any purchase of an alcoholic beverage before noon on Sunday be accompanied by the sale of food. (Thou shalt not show up to church with a buzz.) The fact that Lady Luck serves brunch on Sundays – a proper-as-hell brunch, at that – means that the Hard Luck Lounge is able to extend its hours and start selling booze when Lady Luck opens at 11am, which O'Donnell confirms they will do soon.