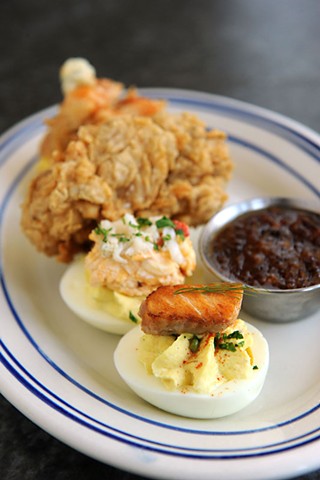 If Austin dining once was a scene, it's now a market. For much of our town's existence, few outsiders made much of an impact. The food culture grew organically as a result, into something identifiably Austin. But clamor is hard to ignore, and it became only a matter of time before a market became an investment. Our town is not our town anymore, even if no one agrees on who belongs in that we. Time will tell if the fresh blood and fresh money deadens or exhilarates. I am not convinced that Liberty Kitchen, the first Austin venture of the Houston-based F.E.E.D. TX Restaurant Group, will really do either. But, for better or worse, it's certainly not hometown.

For one, it readily bucks Austin trends. The cocktail program is fine but not a focus in a town that really likes to drink. The decor is full of tchotchkes and art groupings with barely any reclaimed wood in sight (the raised ceiling does have an installation of rulers). There are no community tables, and the kitchen, while somewhat open, isn't showcased as a theatre. The private dining rooms' chartreuse damask wallpaper, working in an oil derrick, football helmets, and bucking broncos, says just about everything one needs to know about Liberty. They ain't drawing inspiration from Donald Judd. The menu goes maximalist, too, with two pages and two columns and a bewildering array of decimal points. Gulf seafood takes up a large portion, but they throw in everything from meat gravy with macaroni and fried chicken to prime rib and pork-belly carbonara. There's no real unifying principle organizing the hodgepodge. Dishes are grouped by type (burgers or mac and cheese), method of eating (hands-on), or (we're guessing) the geographic feature the dish most resembles (plateau).

And instead of small "sharable plates" with minimal ingredients arranged in flower-crowned parabolas, Liberty piles on ingredients in mega-dishes that, uhm, have a troubled relationship with Instagram. The 40-Oz. to Freedom Gumbo's ($33.99) full menu description, for instance, lists "chicken, roast meats, andouille, king crab, shrimp, oysters, fried oysters, lump crab, blackened redfish, potato salad, fried okra." The Heisenburg-er ($17 for half roll, $24 for full) crossbreeds a burger and club sandwich and throws on deviled eggs in case your blood still travels unencumbered through your arteries. 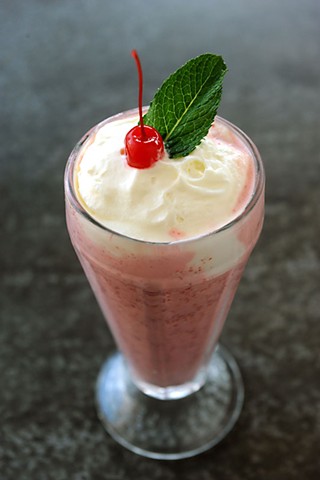 Normally, when the prefix "franken" enters the culinary conversation, you get something like Tex Wasabi's Rock n' Roll Sushi BBQ. But Liberty's kitchen sink doesn't forget flavor in all the novelty. The gumbo takes the time to achieve a luxuriously dark roux. The deviled egg trial ($12.75) tops the halves with smoked salmon, fried oyster, pimento cheese and crab, and buffalo-sauced fried chicken, and serves them all with a side of addictive, if not entirely needed, bacon jam. Each has its own flavor profile to recommend. The Shanghai sweet and chile fried whole lobster ($36.50) reads like a treacly aberration, but escapes with heavy doses of lime and garlic. I will admit the Heisenburg-er is a bit much, if only because my mustache makes eating it gracefully near impossible.

The strength of the Shanghai lobster aside, the food does work best when it focuses on the East and Gulf coasts. The spam musubi with a fried oyster ($5) might work as a bite, but the strong salt of the spam and the oyster's batter overwhelms. Likewise, there was too much soy sauce in the poke salad ($10.75). The vegetable tagine ($19) seems like a dish created by someone who might have some lingering resentment at their Morrissey-obsessed cousin. The couscous is served in broth, but somehow it still seemed dry. Some of the sides, like the shaved brussels sprouts ($9) with smoked grapes and roast cauliflower ($7) with sultana, taste less considered than the descriptions would suggest.

But East Coast classics do get better served. The large chunks of the Maine lobster roll ($31.75) are tossed in a good amount of lemon-tarragon mayo, but not enough to mask the sweetness of the meat. The accompanying salt and vinegar chips were a little milder than we would have liked, but they were nicely crisp. The Georges Bank Haddie chowder ($9.50) doesn't fit a neat definition of finnan haddie, but it was a sumptuous chowder with a pragmatic dash of thyme. The Bay shrimp dressed salad ($15.50) takes off from a Waldorf. It's a good argument for becoming a lady who lunches.

The Gulf side is unabashedly Southern. Pimento cheese ($9.75) is served with ranch crackers, "crazy" roasted oysters ($3-4.25) are topped with pork belly and bacon, and shrimp cocktail ($16) is available in a feisty Mississippi Comeback sauce. There's even a banana pudding dessert topped with ambrosia ($6). Much to the disappointment of my mother, I hate both dishes, but at Liberty they somehow work together. (The $9.50 pie or cake shakes – custard soft-serve blended with any dessert – are not to be missed either.)

The laid-back but upscale restaurant works in Austin, but there's something that feels a little out of place. Maybe a more definite hat tip to Austin (we demand localness even from those that are not local), or a relationship with a hometown supplier, or, heck, a few more beards would keep it feeling more familiar. That requires some outreach, something we are sure Liberty will eventually do. For now, something in the cuisine's twang saves Liberty from seeming like a complete stranger. Relationships have to start from somewhere.