Bringing back the deli 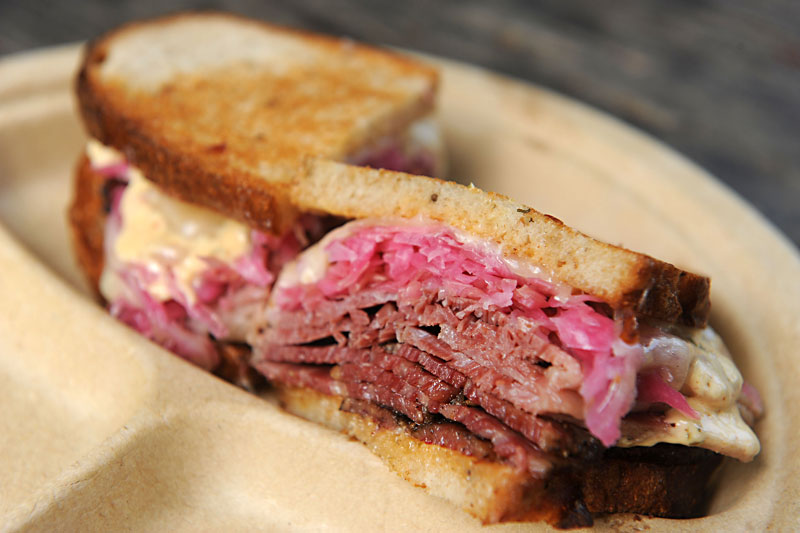 "You know, I'm fine in the shade with a beer. This isn't bad," Bobby Lovelett explains on a scorching Sunday afternoon at Yellow Jacket Social Club. He isn't lying. The heat radiating off of Romanouskas Delicatessen during their opening week in early July was already oppressive, well before Austin reached 100-plus temps. But comfort is a modest sacrifice when accomplishing one's dreams of owning and operating a business.

Besides, both he and co-owner Tom Micklethwait already spent a couple of summers inside of Micklethwait Craft Meats' smoker before starting their new project. "I've gained about 25 pounds," Micklethwait laughs. "You snack a lot. It's like being in a cage; you're sweating, but you're not moving. Besides crab-walking everywhere inside, there's not a lot of physical activity."

The co-owners hope their trailer experience will help them to resurrect a nearly extinct institution. Describing it as the "Plight of the Sandwich," Micklethwait attributes the boom of Austin's culinary scene for their foray into a concept that few have tried and many have failed to do in this city: open a flourishing deli. "It's nice to see Austin venture out of chicken-fried steak and breakfast tacos." Though he quickly adds, "Not that I don't love either of those things."

Micklethwait admits the initial blueprint for Romanouskas was drafted after a chance meeting between him and Lovelett, both former cooks at Vespaio. "I was at Trailer Space [Records] one day and I ran into [Bobby]," he says. "He asked me if I was hiring for the truck and I was like, 'Let's start a deli trailer!' So we did." 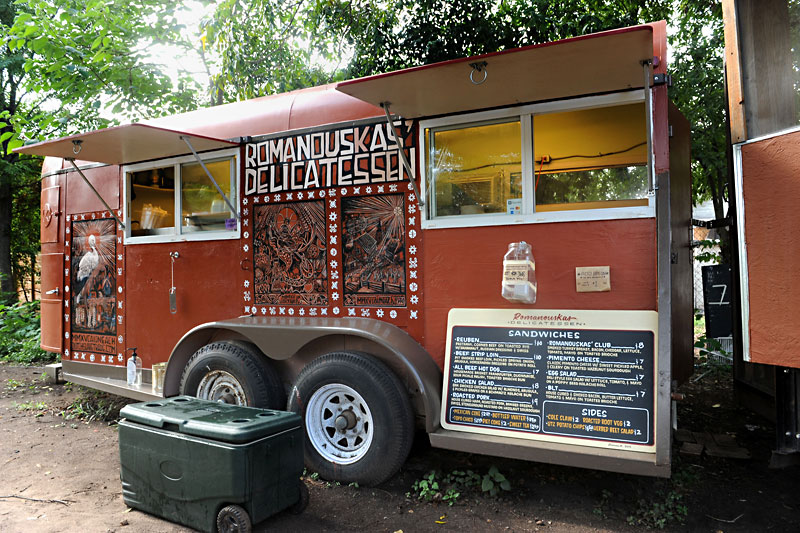 They soon got serious after that first conversation, however. In doing research for their first menu, they traveled to Manhattan – mostly walking around, eating salted, cured meat, and filling a backpack with pickles. They drafted artist Kenneth Holland to provide a Russian folk-art inspired look for the trailer – itself inspired by the name of the business, a nod to Lovelett's Lithuanian great-grandmother's surname.

Lovelett says the original idea was to move the new truck away from the mother ship of the Micklethwait trailer, but relented after considering the benefits of cross-promotion involved and remaining at a desirable location. "We've already got our regulars," Lovelett says.

Location aside, their commitment to old-world craft was part of the plan from the beginning. Everything at Romanouskas is made from scratch, from the cured meats, to the bread, to the sides. A lot of prep work goes into making a good sandwich. The pastrami, corned beef, ham, and hot dogs are all cured and smoked on-site. Future offerings like bacon, fish, and ring bologna will be made in-house too.

"We may have to take a research trip to Chicago and Milwaukee," says Micklethwait.

Tap Dance
The many firsts of 4th Tap

Breakfast of Champions
Bulking up with Party World Rasslin'