Indian with a Texas twist 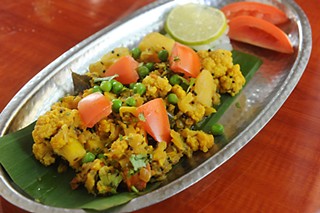 Although I lived nearby until recently, I'll admit it took me a while to stop by Nasha, the Indian restaurant that took over the former Casa Colombia digs on East Seventh. You would be hard-pressed to find an Austinite opposed to psychedelia in music, but culinary psychedelia is another thing – more readily associated with stomach cramps and nausea than chop-licking and second helpings. So while the sign exhorted me to "get high on Indian cuisine," I wasn't quite ready to spark up. 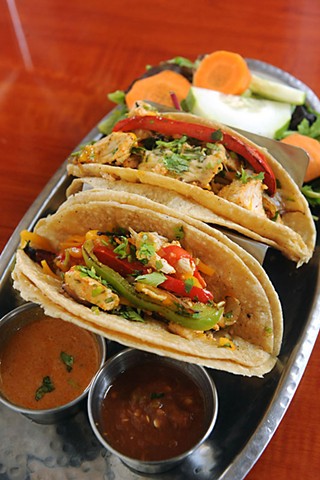 But the restaurant does bring Indian food to a neighborhood that could use some flavor diversity, and they offer it at a midlevel price point. I may not steal any design ideas from the slightly headshop-y ambience at Nasha or the makeshift parking lot patio, but I can't really ding them for it either. Restaurants should be judged on their own terms. 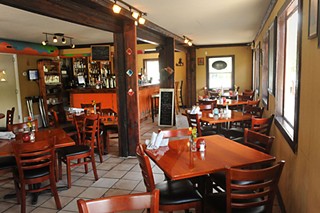 Yes, I firmly believe that in Austin's rapidly saturating market, the men and women who set the scene for the meal are as integral to hospitality as chefs and sommeliers. The discussion of their work sometimes veers toward something that is not unfairly called elitism, but that is informed by our dining culture's current fetishization of anything and everything upscale. The provenance of the fixtures or chairs doesn't really matter; Nasha is simply not playing that game.

That's not to say there is no thought behind the restaurant. And the offerings at Nasha aren't solely strip-mall traditional. It's only natural that an Indian restaurant that serves margaritas would add a few Texas inflections to their dishes. The roasted chips and salsa ($2) are actually weightless red lentil papadum served with the expected mint chutney and a surprising tomato-based salsa. Roti, grilled with mozzarella and chicken, paneer, or kheema, becomes a quesadilla ($7). And there is an entire section devoted to tacos ($7-9). The cultural blend makes sense. Indian and Mexican cooking share many of the same ingredients, and the profile of, say, the goat masala tacos isn't that far from barbacoa.

The curries ($10-13 depending on protein) include good takes on favorites like tikka masala, vindaloo, and saag, but offer a few less-expected options. Those excel the higher they get on the Scoville scale. Almost everything on the menu is available in a range of spice levels, topping off at an incendiary "Desi hot." We ordered two at full burn – Malvani roasted coconut curry with shrimp and Mumbai-style Millionaire's Curry with paneer. It's a rare feat indeed when heat doesn't overwhelm flavor, but ginger and garlic were prevalent in both. Nice work if you can stand it. Any of the flatbreads work for sopping, but we couldn't get enough of the tandoori roti ($3).

The kitchen equally stands tall when things are toned down, however. Aloo gobi ($10) heavily bombards the Punjabi cauliflower and potato dish in mustard seed, but turmeric brings it back down to Earth. Whole curried mussels ($12) are a nice alternative to the wine-brothed PEIs ubiquitous on Austin menus. The best dish was the lamb biryani ($12). With its miraculously tender meat and faint apricot sweet, our only complaint was that there were not more raita.

A handful of the dishes, however, fell short. We liked the choice of kale with chana dal ($10) instead of more pedestrian spinach, but cumin never made its promised appearance. The dal soup served with the tacos lacked any texture. There was texture in the kheer ($3), but no bite. The gluey paste did not encourage much further examination. Both the lamb puff ($6) and veg puff ($4) samosas had rich fillings that hardly needed the accompanying mint and tamarind chutney, but a little more crunch would have been nice.

But the playful cocktail program easily drowns those sorrows. The Sassi Lassi ($7) adds rye to yogurt and mango, splitting the difference between an orange whip and milk punch. One can probably figure out the ingredients to the Indian Dude ($8) by knowing it is a tribute to The Big Lebowski, but the obviousness of the chai white Russian doesn't detract from the taste. Both are perhaps a little too sweet for a before-dinner drink. For the appetizer round, the margarita selection perhaps works best. We tried the curried margarita ($8) at the suggestion of the server. And while the jalapeño-heavy drink doesn't really translate the curry part, it's difficult to argue with the margarita part. And perhaps it is best to keep classics classic.

In the new Austin dining landscape, sincerity is becoming rare. Nasha's giant parti-colored mural may have announced itself loudly, but it did so with a refreshing lack of pretension. The website states that owner Mahesh Shinde (also of New India) wanted his latest venture to feel like Austin. We're not sure if that Austin still exists. But we sure like visiting the memory.