This Knish combines literature and pastries 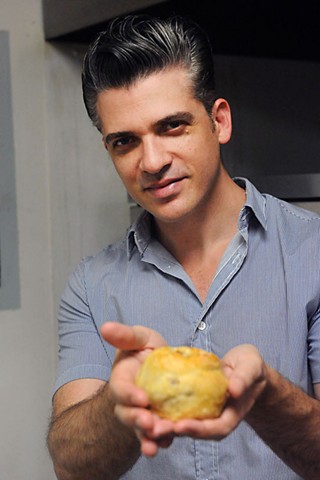 In Austin, the story of food has had its fair share of protagonists. Stock characters abound – from ubiquitous Czech kolaches to overstuffed calzones. Indian samosas can be found everywhere from fast casual eateries to the Whole Foods Market hot bar, and the Latin American empanada is the sole focus of more than one local food truck. But thanks to an epidemic closure of Jewish delis and a shifting national palate, the already unsung knish has faded further into the background. And in Austin, they never really had a chance to tell their tale. 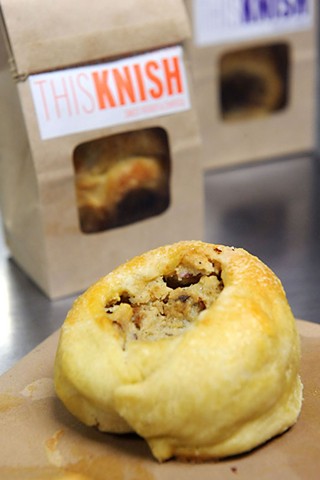 Joel Weinbrot hopes to write a new chapter. For Weinbrot, founder and main baker of This Knish, the pastries are a way to share his love of the written word while connecting to his Jewish heritage. Born in Brooklyn, he grew up eating what he calls a "quintessential Jewish food." But while New York had many bakeries with illustrious histories of selling knishes, including Yonah Schimmel Knish Bakery and Gabila's, no one would ever call Austin a hub. Until relatively recently, it was difficult to find a decent bagel, much less a knish. A craving led Weinbrot to take matters into his own hands. He returned to New York for an extended trip, visiting family and friends and "sneaking around" making "clandestine" observations of delis. After he landed back in Austin, he spent a year experimenting with different recipes before he managed to find one that he liked. That recipe became a base for other varieties and a business was born.

"I know there's a substantive Jewish population in Austin. There are 18,000 Jews here and all underserved. 18,000 Jews and no knishes," Weinbrot says, "It seemed like a no-brainer."

The knish originated in Eastern Europe and was brought to New York by Jewish immigrants, growing in popularity in the early 20th century. Traditionally, the usually savory pastry is comprised of a filling – mashed potato, kasha (buckwheat groats), sauerkraut, and cheese – encased in dough and then grilled, fried, or baked. The comfort food can take any shape, but baked, stuffed rounds and fried potato squares are most common.

Modern bakers, especially on the East Coast, began experimenting with the template in the early Aughts, adding international flavors such as wasabi, kimchi, and roasted green chiles to heritage recipes. But the haute knish trend largely skipped Austin until now. Launched in May, This Knish currently offers three baked varieties that marry tradition and innovation – the Leopoldbloom (mashed red potato and caramelized sweet onion), the Dulcinea (sweet potato and chipotle), and the Scheherazade (mashed potato, eggplant, tomato, and Middle Eastern spices).

The scholarly names are no accident. Weinbrot is a professor at St. Edward's University with a Ph.D. in English literature. Indeed, the inspiration for his company came from an unlikely source – James Joyce's Ulysses. Weinbrot was reading the novel at Zilker Park when he says a "confluence of circumstances" occurred. "The protagonist is an Irish Jew with this robust appetite," he says. "Sometimes it happens when I read a book, I'll make all these associations and I'm off somewhere. Maybe because he's a Jewish character, and I thought it's been a long time since I've had Jewish food. So I thought maybe I'll try making knish."

On the This Knish website (www.thisknish.com), tongue firmly in cheek, the "about us" section frames Weinbrot's journey in terms of Homer's Odyssey, describing a "regrettable incident with the murderous one-eyed baker in Hell's Kitchen," a group of "knish-eaters" living under the L train platform, and a band of seductive siren buskers, who lured him with songs of "rolling knishes all night long." Weinbrot's love of literature informs the entire operation.

For example, Weinbrot's favorite characters serve as inspiration for the different recipes. Scheherazade, the storyteller from One Thousand and One Nights (also known as Arabian Nights), influenced the use of Middle Eastern spices in the namesake knish. Dulcinea del Toboso, the true love of Cervantes' Don Quixote, suggested a mix of spicy (chipotle) and sweet (brown sugar, maple syrup). An upcoming chocolate knish will be named after Heathcliff from Wuthering Heights. Fittingly, it will be dark, brooding, and very alluring.

"Austin may be the only city where it might work because of its reputation for weirdness and quirkiness," Weinbrot shares. "If I started naming the knishes after these literary characters, characters people might not be familiar with, it might spur curiosity about the books." The brand even supports the Austin Public Library Friends Foundation.

But literature is not the only thing Weinbrot is obsessed with. He is dead serious about his craft. He named his company This Knish because he focuses on handmaking each knish one at a time. The dough is made with humanely raised geese schmaltz (rendered fat), which makes the crust flaky and tender. The technique is important. The dough is always rolled on cold marble, and the finished knish is always cooked on a hot stone. All the fillings are made in-house, producing 6- to 6.5-ounce rounds sufficient for a meal.

For now, the knishes are stocked at Wholy Bagel (4404 W. William Cannon) from Friday through Monday, and are available for online orders (with a minimum of three knishes) via their Sunday Knish Run, but Weinbrot hopes to open a food truck by early 2016. There, he plans to venture into different flavors, vegan options, and also knish sandwiches – knishes sliced in half with pastrami and corned beef wedged in the middle.

That story may not have a release date yet, but it's sure to be a bestseller. 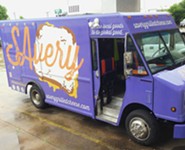 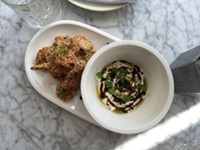 Dine Out, Do Good
Three delicious ways to give back this weekend